Rather than Curse the Darkness

April of 2020, the most hellish month most of us can remember, is over.  It seemed appropriate to light a pencil rather than curse the darkness, and there’s a few lighter pencils that have come my way recently that I’ve got to show you.

The first was this one: 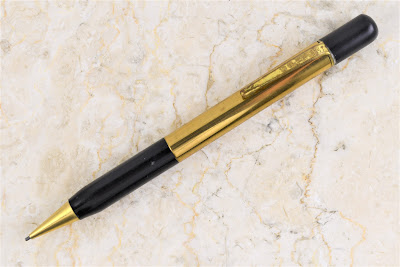 This one came my way in a lot of junkers – my real target in buying the bunch was that bronze and black Gordon I wrote about a week ago.  I always carefully inspect everything that comes in the door, and this one was marked “Jugo” on the clip: 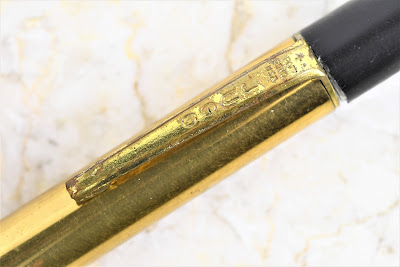 And since I also have to take everything apart that comes in the door, it wasn’t long before I found out it was a lighter pencil: 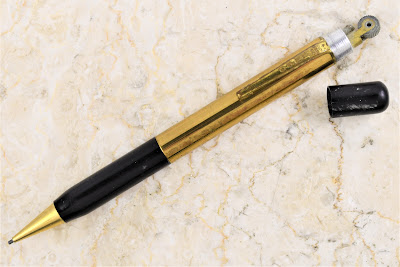 Complete with an unusual lighter assembly, built different from the usual cylindrical lighter unit that just slips down inside the barrel.  The lighter part just screws into the top end of the barrel, acting as a kind of cork on top of a barrel full of lighter fluid: 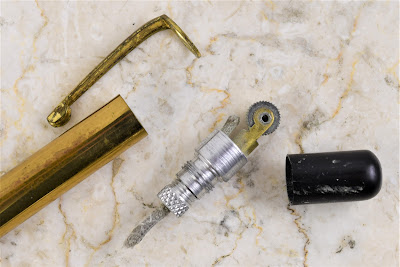 Trick pencils like this are something I enjoy, so I went to put it with the other lighter pencils in one of my drawers full of bad ideas.  That’s when I found something I forgot I had: 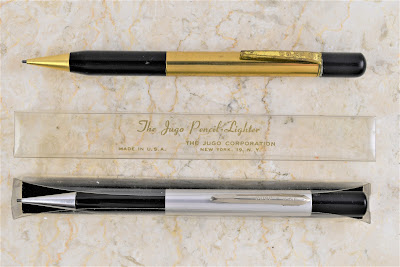 This wasn’t my first Jugo, and the other example is mint, boxed and with paperwork.  The silver one has a clip that’s actually built into the barrel rather than a washer clip: 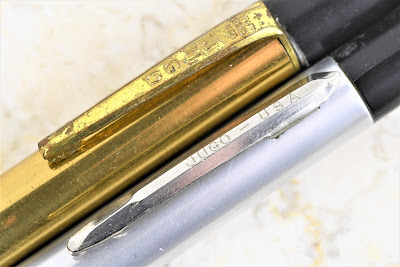 The instruction sheet indicates that the Jugo Corporation was located at 600 West 52nd Street, New York: 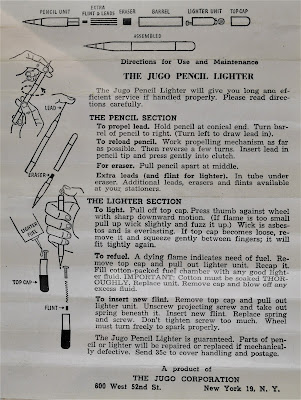 While I was putting the new Jugo in its place alongside this one, I noticed another lighter pencil I had forgotten that I had. 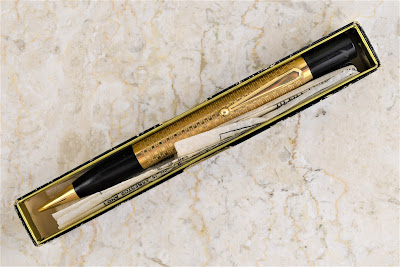 I vaguely remember buying this years ago, and it has a lot in common with those Osborne overlays I was showing off recently (see “Customer Number 600 at https://leadheadpencils.blogspot.com/2020/04/customer-number-600.html). 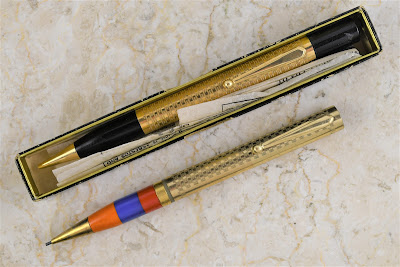 What surprised me the most was that I apparently had never disturbed those tissue-thin instructions to see what was inside them.  At some point I must have put it away intending to get around to doing that, but for whatever reason I never did. 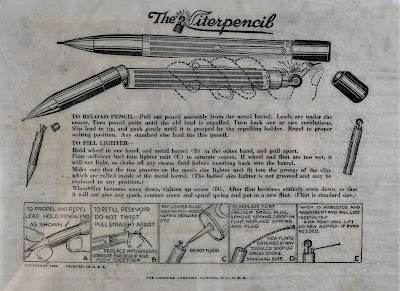 The instructions for the “Literpencil” are just wonderful, with nice comic book like illustrations, a great logo, and . . . wait a tick . . . 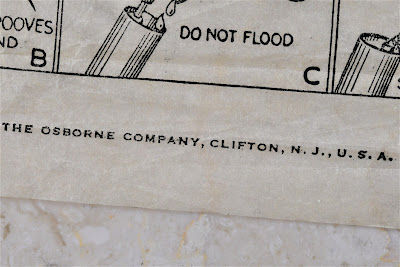 I’ll be darned.  I guess I already knew these were Osborne products, after all!  And it’s even dated, to 1934: 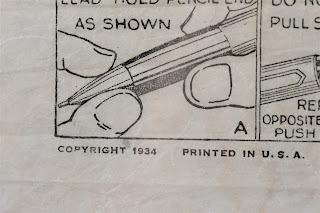 I’ve got one more lighter pencil to show you - I teased the audience on Facebook with it, along with a suggestion that it might make a Waterman fan’s head explode: 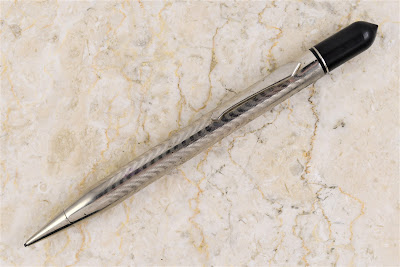 The clip is unmistakably the same one found on the Waterman Patrician - here it is alongside the Patrician from yesterday’s article, and flanked on the other side by a “Sta-Rite” pencil: 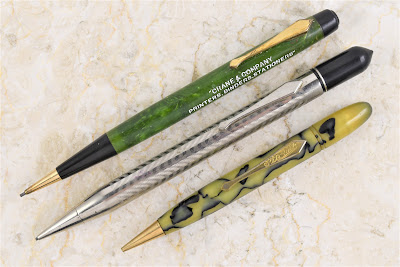 I’d written about the mystery surrounding how a Waterman Patrician clip wound up on a third-tier Sta-Rite in October, 2018 (see https://leadheadpencils.blogspot.com/2018/10/two-puzzling-details.html): 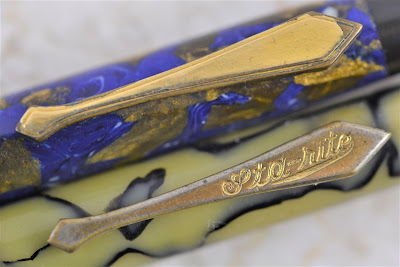 Did Waterman make a lighter pencil?  That is a tantalizing thought . . . especially given some sharp gasps heard when I shared a picture of this pencil without any explanation.  However, this one isn’t marked . . . and now that I’ve found both this and a Sta-Rite with that same clip, I’m less likely to think this is authentic Waterman; more likely is that Waterman sold off leftover clips, as unlikely as that sounds given Waterman’s propensity to use up old parts on closeout models.

The way this one is put together might provide a clue as to whom Waterman sold these clips. 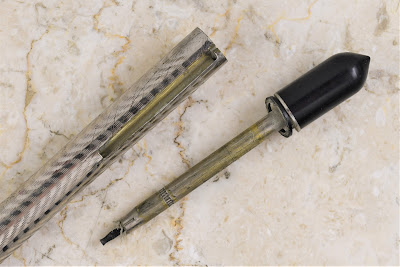 You’ve seen that here before, a long, long time ago: 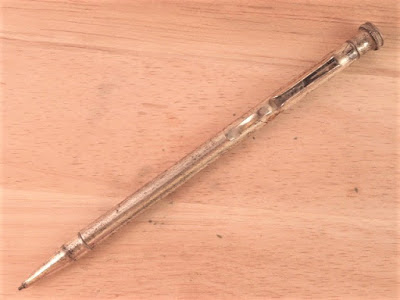 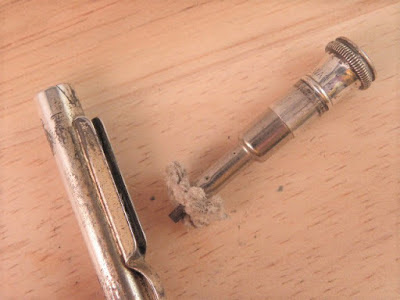 Back in 2013, I wrote about this pencil (the article is in the books, in The Leadhead’s Pencil Blog Volume 2, page 18).  That one was marked A.M.W., an acronym for Art Metal Works, makers of the ubiquitous Penciliter.  Included in the article was the patent associated with this pencil, awarded to Louis Aronson (whose name formed the basis for the trade name he adopted - "Ronson") on June 8, 1920 as number 1,342,838. 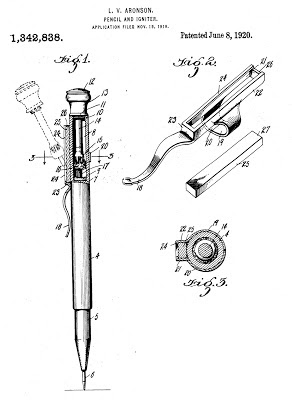 And. . . Aronson did adapt this early design to something very similar to today’s mystery pencil – the “Lite-O-Rite” (see The Leadhead’s Pencil Blog Vol. 1, page 142): 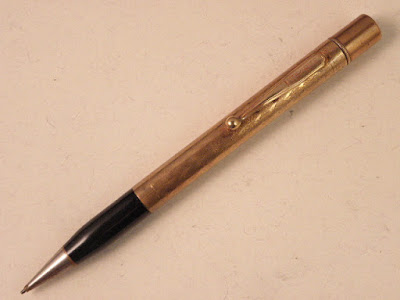 But there’s something that doesn’t make sense here.  Every Art Metal Works product was marked to the hilt like an Egyptian obelisk.  I’m convinced if the company had stayed in business any longer they would have made the pencils an inch bigger to accommodate all the latest patent numbers!