In yesterday’s article, I referred back to my very brief summary regarding John H. Knapp, an early associate of John Mabie (founder of Mabie, Todd & Co.).   All I knew about Knapp at the time (actually, until I sat down to research this article) came from David Moak’s outstanding book, Mabie in America.  Moak’s work is among my favorite pen/pencil books; however, Knapp was only an incidental character in the Mabie Todd story, so Moak had no reason to cover the Knapp story in more detail.

Much of Moak’s account is based on John Mabie’s obituary, which was published in The American Stationer on January 14, 1892: 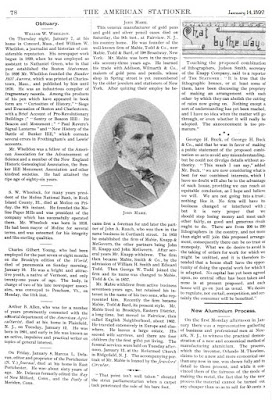 Moak writes on page 11, “In 1853, Mabie forms a new company, Mabie, Knapp & Johnston at 15 John.  A listing in the 1994 catalogue for the April Bonham’s vintage pen and pencil auction first alerted the author to the existence of Johnston, though some of the information in the listing appears to be incorrect or miss-typed (sic).  The mention of a Mabie, Knapp & Co. in the biography is an apparent error.”

There’s good reasons to be confused.  Unfortunately, “John H. Knapp” is a name which is just common enough to make him difficult to track (a contemporary lumber magnate from Wisconsin was just one of the many John Knapps muddying up the search results)  I can’t definitively identify any of the other Knapps I came across as being our guy prior to 1851, and Doggett’s New York City Directory for 1850-1851 shows no listing for him.

So, since all sources point to a “Mabie, Knapp and Johnston” emerging by 1853, I started there and worked backwards.  I found John Mabie in the 1850-1851 directory, making pencilcases at 35 Cortlandt:

That is consistent with Moak’s history, and John Mabie’s obituary on which it is based, which report that John Mabie had been working with John Rauch since 1843, eventually becoming a partner in Rauch & Co.  Mabie “retired” from Rauch & Co. in 1851 to a farm in Fairview, Bergen County, New Jersey “on the advice of his doctor,” according to Moak’s book (pages 1 and 2).   The 1851 Doggett’s directory lists John Rauch at the same address as John Mabie, at 35 Cortlandt:

That same directory also lists an “Alexander Johnston,” who was making pencilcases at 6 Liberty: 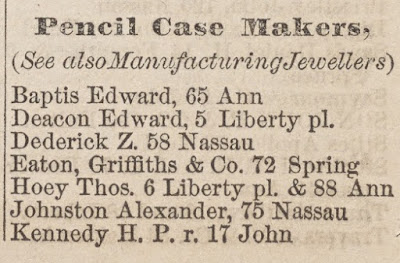 Johnston was running an independent operation, according to this listing, but things might have changed due to turmoil in Johnston’s life.  On March 14, 1852, Alexander’s wife, Mary, passed away – she was just 27 years old:

Within a year, Alexander Johnston sailed for Glasgow, as reported on January 16, 1853. 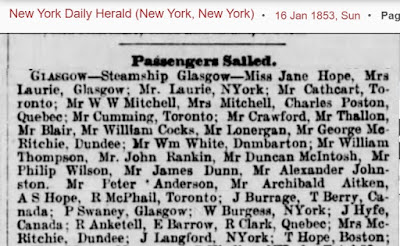 Maybe.  This passenger list includes an “Alexander Johnston,” but there was also a Scottish geographer by the name of Alexander Keith Johnston running around at the same time, so it might have been the famous geographer returning to the motherland . . . more common names.  However, while Johnston appears as a pencilcase maker in the 1853-1854 directory (which would have been published before his wife died), he disappears from the directory entirely for 1855.  Whether or not this was our Alexander Johnston sailing off to Scotland, after 1853 he sails out of our story for good.

In the meantime, a block or so away from where Johnston and Mabie were making their pencils, two merchants named H.D. Ward and Edwin Ward had decided to part ways.  To continue the business, Edwin Ward associated himself with a John H. Knapp and moved to 117 Maiden Lane to sell “fancy goods, brushes, etc., etc.” as Ward & Knapp.  These notices began in March, 1853, and continued to be published on a regular basis into the second half of the year: 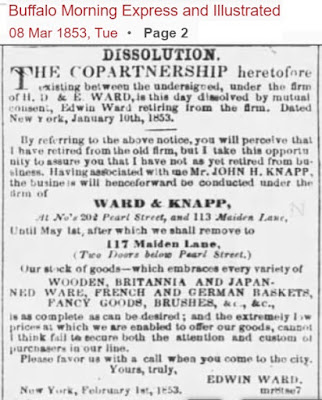 This is the first mention I can find of a John H. Knapp who might be our man is this notice, which doubled both as a copartnership notice as well as an advertisement (note the last line: “Please favor us with a call when you come to the city”).  The firm remained in business under the same name for some time, appearing in the 1860 edition of Trow’s New York City Directory at 64 Maiden Lane:

But this might not be our guy, believe it or not.  Could there really be two guys named John H. Rauch that close together?  The 1860 directory has two listings for John H. Knapp – the listing at the same address as Ward & Knapp reflects a residence in Brooklyn, while the John H. Knapp who is clearly our pencil man shows a residence on Second Avenue:

The same is true in the 1853-1854 directory, which would have been published right around the end of 1852, the time all the characters in our story were coming together:

Meanwhile, John Mabie had recovered from whatever had ailed him and was back in New York by the end of 1852.  Under “Mabie” in the 1853-1854 directory, we find a listing for Mabie, Knapp & Johnston, at the same address as Knapp’s pencil operations.  John Mabie is listed there as well: 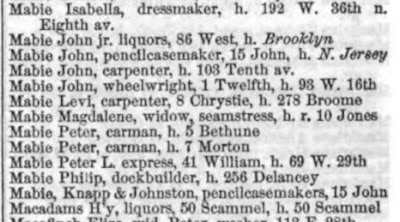 Alexander Johnston’s last appearance in our history is in this same directory, also at the 15 John address.  I found no formal notice of the formation of Mabie, Knapp & Johnston, but the partnership, which appears to have been informally put together after the death of Johnston’s wife in 1852, was short-lived.  Notice of dissolution, by the withdrawal of Johnston, was published on May 31, 1853, just a few months after Alexander Johnston sailed off to Scotland.  Johnston was replaced by John McGovern, and the firm was renamed Mabie, Knapp & McGovern:

The term of the partnership agreement for Mabie, Knapp & McGovern ended on December 31, 1855, and notice of dissolution was published on January 7, 1856.  Knapp took with him the firm’s name and wound up the partnership at 58 Nassau, while Mabie and McGovern stayed at 15 John:

From that point on, Moak’s book ably documents the evolution of John Mabie’s partnerships into what became Mabie, Todd & Co.  Knapp, however, falls from Moak’s radar completely (and rightly so, as he was a tangential character in the story Moak was writing).  As mentioned yesterday, Knapp obviously remained in business for many years after parting ways with John Mabie, as evidenced by the many examples of magic pencils which bear his 1872 patent date.  The year those patents were granted, he was still at 17 John Street, according to the 1872-1873 Trow’s directory: 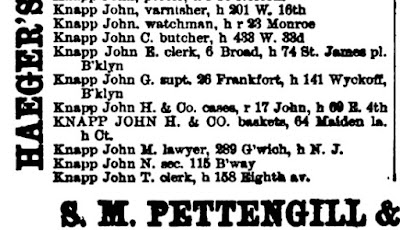 He was still at that address in 1877, when a confidence man claiming to have been sent by a local jeweler to pick up merchandise relieved him of a half dozen gold toothpicks:

In 1899 he was listed at nearby 23 John Street as a manufacturer of both pen cases and pencil cases, according to Seeger and Guernsey’s Cyclopaedia of the Manufacturers and Products of the United States: 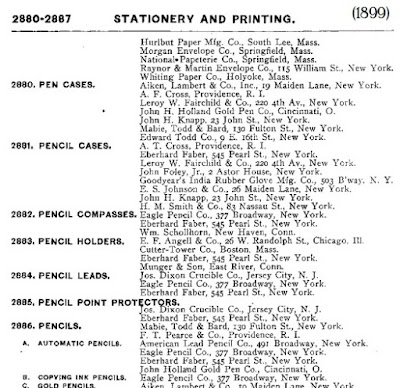 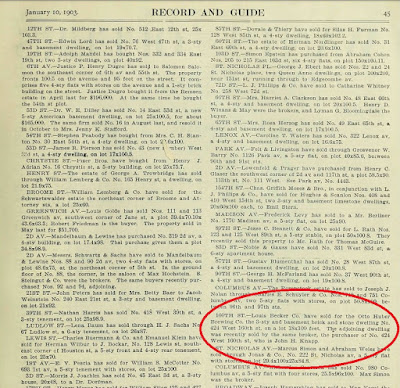 In the 1915 directory, Knapp’s residence on 160th Street still appears, but the listing for his business suggests he was no longer associated with the firm which continued to bear his name.  The listing indicates that Jacob and Charles Miller were producing “pen mountings” as John H. Knapp Co., at 102 Nassau Street:

In 1920, The Commercial Register reported Charles Miller at 102 Nassau, still making pens.  But there’s no mention of Jacob:

The last mention I found was in 1921, when The American Stationer reported Knapp as among those firms making gold nibs: 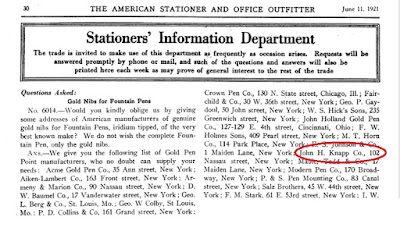 From there, the trail ran cold.  I found several obituaries for guys named John H. Knapp, but none contained any details connecting them definitively to our man – and you would expect, with such a long career as a pencilmaker, that there would be at least some mention of it.

If finding “John Knapp” was challenging in a city as large as New York, looking for a “Charles Miller” after 1921 proved immensely daunting, so I don’t know how much longer Miller remained in business or continued to use Knapp’s name.  However, now we know that John H. Knapp, who never warranted more than a footnote in the early history of Mabie, Todd & Co., had a career that continued at least fifty years after he and John Mabie parted ways, and Knapp’s successor, Charles Miller, continued under that name for at least fifteen years after that.
Posted by Jon Veley at 3:45 AM