Putting that "First Year" Designation to the Test

It’s been a while since I’ve written about Waterman Patricians: 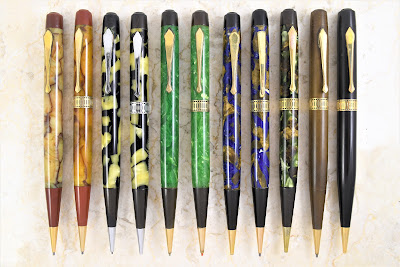 The Patrician was introduced in 1929 with great fanfare . . . and just before the stock market crash signaled the onset of the Great Depression.  Most of the articles I’ve written here have been about the weird “closeout Patrician” models from the late 1930s, which used up parts and mixed and matched different elements.

Today, I’m going to examine the other end of the Patrician timeline and some assumptions I made when I wrote The Catalogue.  The Patrician appears on page 163 of the book, along with a discussion of so-called “first year” Patrician pencils – those which lack a center band:

“Pencils without bands are referred to as "first year" models, and there is some evidence to support this. First, the moss agate color was not introduced until 1932, and no bandless examples are known to exist. Additionally, note that the bandless examples all have a clip that is slightly wider: the patent application for the original clip was filed by Gabriel Larsen on October 22, 1929 (and received patent number 1,808,779 on June 9, 1931); Larsen applied for a patent for an improved clip on May 8, 1930, receiving patent number 1,923,269 on August 22, 1933.” 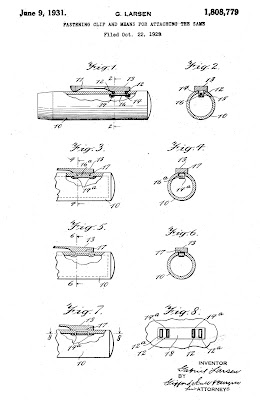 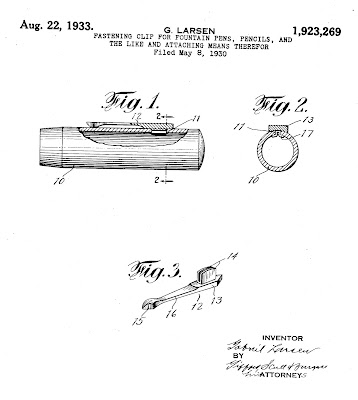 What is consistent in my straw poll is that bandless examples usually seem to have the gawkier 1929 design, while those with bands have the more polished 1930 design.  But there’s a lot of “ifs” built into any statement that a bandless Patrician pencil is a “first year” pencil.  If Waterman turned the calendar to 1930, and if at that time Larsen’s clip was ready to enter production, and if the company was willing to dispose of leftover 1929 clips rather than using them up . . . then we might have something concrete to go on.

Personally, I’ve never believed that the “first year”/bandless connection was particularly solid; the moniker, however, is a handy (not to mention lucrative) nickname.

There’s another problem: bandless Patricians which are obviously not made during the first year of production are out there, and they are out there a lot.  Onyx, the color at far left in the first picture above, wasn’t introduced until 1930, but bandless onyx pencils are (by Patrician standards) a common sight.  And moss agate, that green and bronze color, may not come in a banded form on the regular production line, but I did find and write about a closeout model in that configuration (https://leadheadpencils.blogspot.com/2016/12/three-patricians-from-ohio-pen-show.html): 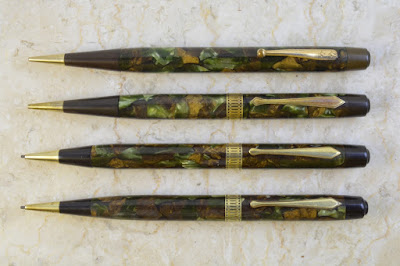 Last week, another Patrician turned up in an online auction which provided a unique opportunity to test my theory, and the price was extremely reasonable: 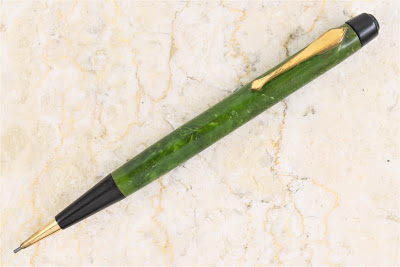 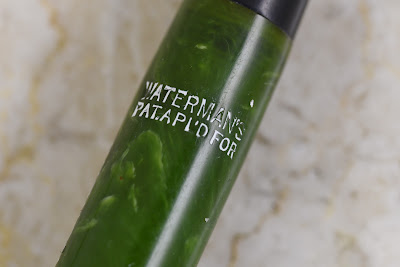 It was cheap because it bears an advertising imprint - normally, I’d agree that would be problematic on something like a Patrician, but this one suggested that it might provide a bit of historical context: 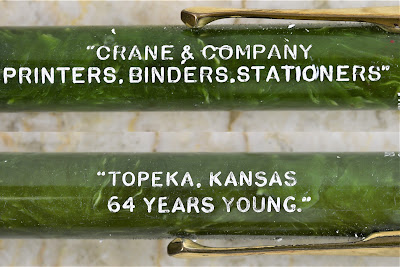 “Crane & Company / Printers, Binders, Stationers / Topeka, Kansas / 64 Years Young.”  This looks promising: an executive wouldn’t imprint something like “64 years young” on a pencil – especially an expensive, top-of-the-line flagship model like the Patrician – unless he was dead sure when his own company was founded.   So, when the pencil arrived, I started poking around to see if I could find out when Crane & Company in Topeka, Kansas was founded.

It didn’t take long.  The 1889 edition of Caspar’s Directory of the American Book, News and Stationary Trade and Kindred Branches lists Crane & Co.:

The listing is a bit difficult to read.  The George W. Crane Publishing Company, “the only complete Law Book Store West of Chicago and St. Louis,” had been succeeded by Crane & Co., and the company was established in 1868.

But I believe at least this example of a “first year” bandless Patrician was sold three years after that first year.