There was something really interesting about that Knapp’s 1857 patent pencil I showed you on Monday: 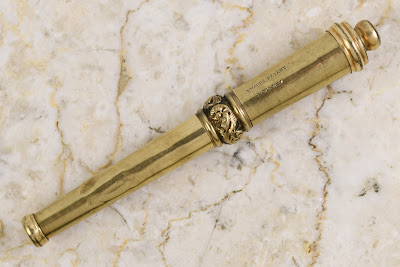 Although “Knapp’s Patent” for this one was a design patent, covering only the outward appearance of the pencil as a cannon figural, the way it works is really interesting.  Twisting that middle band is what moved the pencil forward.  I mentioned that I’d only seen that on one other pencil, and it wasn’t a Victorian.  It was these: 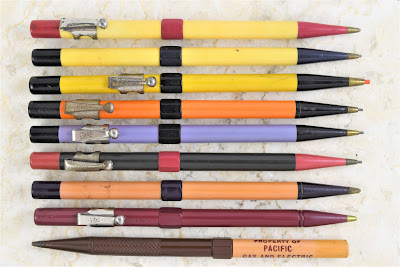 These are “Center-Turn” pencils (that’s the official model name) made by the Listo Pencil Company of Alameda, California.  Whenever one has crossed my path over the years, they’ve been just cool enough that they have been diverted into a special drawer to await the day I would take a picture like this.  Most are along these lines, with a two-color scheme and a middle nut that turns to advance the lead.

American Writing Instrument Patents Volume 2: 1911-1945 proved particularly indispensable in following up on this lead, and I’m not just saying that because I wrote the damned thing.  I wrote the book because I needed that research tool – and this was the perfect application for that tool.

The brains behind the Listo Pencil Company was Charles E. Wehn – a name that gave me fits as I was writing the book because auto-correct was constantly trying to change his last name to “When.”  His first patent for a pencil along these lines was this one, which he applied for on December 3, 1918 and which was issued as number 1,302,999 on May 6, 1919: 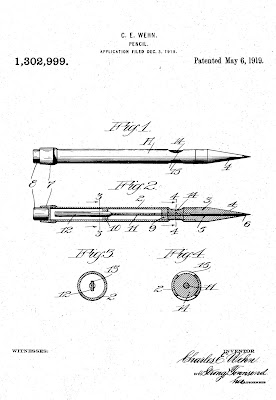 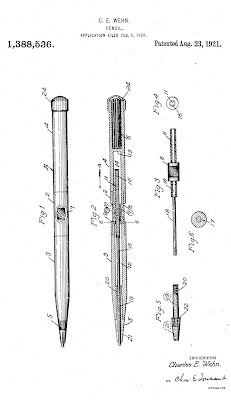 Both of these early designs had holes in the barrel which exposed a center knurled nut which turned to advance the lead – exactly like an early Slencil, but with a bit more barrel material around the middle part.  Wehn was soon looking for ways to make those holes on the sides of the barrel go away, and his next patent along these lines shows a band concealing the screw drive.  This one was applied for on July 31, 1923 and was issued on June 9, 1925 as number 1,541,085: 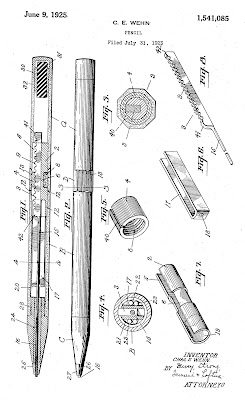 My friend Jim Stauffer posted an article on Listo last year, and he’s just finished updating his article with new research on the company.  Jim’s interest in these started with the tips on the pencils, which have relief slits cut in them in order to grip the lead – that’s an important feature found on Autopoints, his main focus (Jim, in case you don’t know, was a major contributor and collaborator on my latest book, A Century of Autopoint).  Jim’s latest research is at http://vintageautopoint.com/Listo_essay_v11bPL.pdf and is well worth your time.

In fact, there’s just one degree of separation between Autopoint and Listo: prior to founding Listo, Wehn was a sales representative for the Joseph Dixon Crucible Company – the company Charles Keeran hired to make his newfangled leads in a diameter of .046 inches.  Did Dixon’s good customer Keeran and Wehn cross paths, perhaps at the Pan-Pacific Exposition in San Francisco in 1915?  Hmm... that’s an intriguing thought, completely devoid of any substantiation to date, but worth poking around a bit one of these days, methinks.

Many of the examples Jim Stauffer shows off in his article are consistent with what I’ve turned up.  I’ve also found ringtop examples: 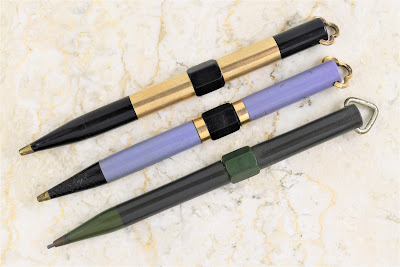 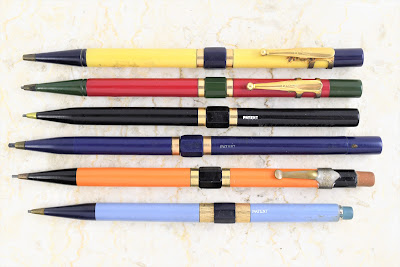 The examples with exposed erasers are different, but not as graceful in my view.  Note also that several of these are stamped “Patent” on the barrel.  The accommodation clips on most of these are something you’ve seen here before, just a couple weeks ago in fact – it’s the same “Holyoke B” clip Swanberg used.  They were marketed by Van Valkenberg in their 1931 catalog, but they were introduced earlier than that: 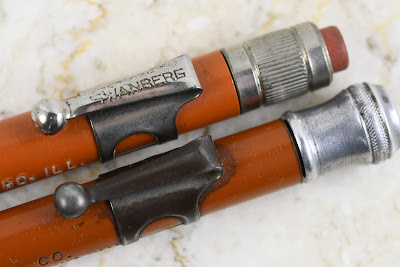 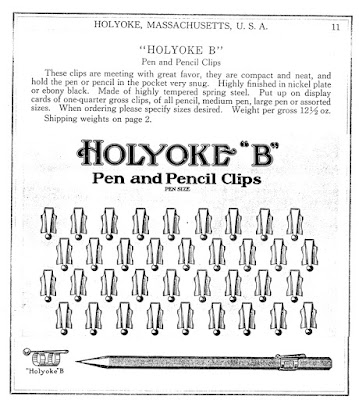 However, you’ll note that a couple of these Listos have a different, more graceful clip: 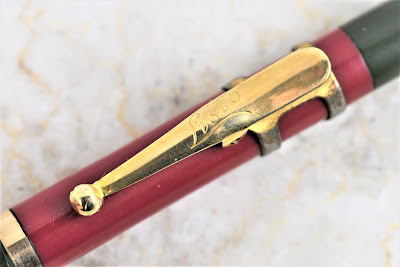 Inconspicuously stamped underneath the back part of the clip is another little bit of information – a patent date of September 16, 1919: 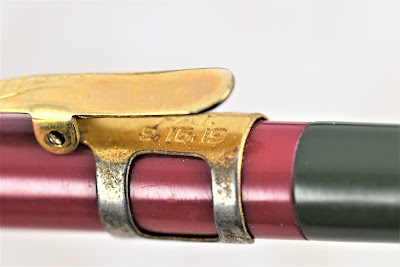 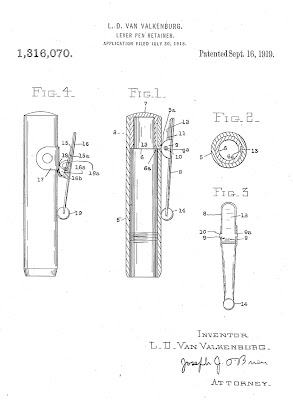 Not surprisingly, these are also found in the same Van Valkenburg in which the Holyoke B clips were advertised.  These were marketed as the Van Valkenburg “Security” clips: 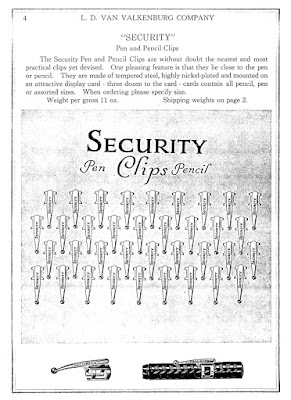 As I mentioned earlier, Jim Stauffer does a great job outlining Listo’s history, but here’s the cliffnotes version.  The company was founded in 1920 by Charles E. Wehn in San Francisco, California; as early as October, 1920, the company was announcing plans to introduce a new pencil, and Office Appliances reported that the company’s first pencils would be out “within two months” in April, 1921: 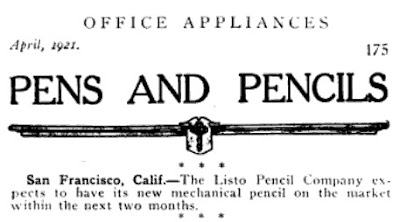 The Bookseller and Stationer reported, in an account dated June 16, 1921, that the company was planning to build a factory in Alameda.  Perhaps the economic slump of 1921 slowed things down a bit for the company:

The plant’s first pencil was turned out on August 30, 1921, according to the Oakland Tribune: 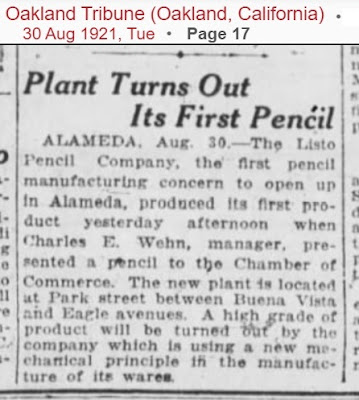 The following month, notice was published that the company would formally relocate to Alameda: 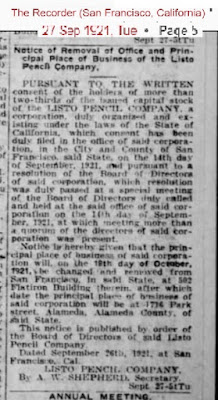 In December, 1921, the Oakland Tribune ran a nice story about the fledgling company, including a picture of Wehn: 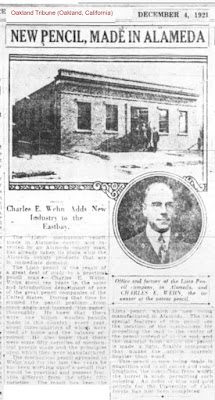 “The two special features of this pencil are the location of the mechanism for propelling the lead in the center of the pencil instead of the end, and the material from which the pencil is made, a light, flexible compound that makes the article scarcely heavier than wood,” the article states.

“Listolite,” the company called that material - others called it Pyralin, but it was celluloid – that makes the Listo well ahead of its time, years before LeBoeuf popularized the substance for use in pen and pencil barrels in the mid-1920s.  Jim dug up this article in Du Pont Magazine from November/December 1922, in which the company praised Listo (Spanish meaning “ready”) for the forward thinking use of Listolite:

While I haven’t seen examples of Wehn’s earlier designs, by the time this advertisement was published in 1924, they were in the same form as the examples pictured above:

Now that I know what I know, that drawer these pencils have been living in simply won’t do. I’ve got to move things around on the wall o’ pencils for the Listo Center-Turn  – pencils that are earlier than they look and far more innovative than I have given them credit.

Even if they do use the same mechanics as my Knapp’s 1857 patent pencil!
Posted by Jon Veley at 3:45 AM