Things have been pretty quiet here at the blog for awhile, but not without good reason.  No, there haven't been any bodily injuries or illnesses, and no, I haven't run out of things to talk about (to the contrary, I've got a lot of new stories bottled up inside just bustin' to get out).

Truth be told, I was researching the October 1 article when things went horribly wrong.  The patent databases just weren't cooperating, and nothing I was doing was turning up the patent that I just knew was supposed to be there.  Not even George Kovalenko's book could help me, since the patent in my crosshairs was from around 1880 and George's book starts with patents issued in 1911.

I was frustrated, annoyed and sheepish all at once.  I decided that someone needed to write a book about patents issued before 1911 so that I wouldn't spend so much time rooting around for these things when I need them, once and for all.

And I decided it might as well be me. 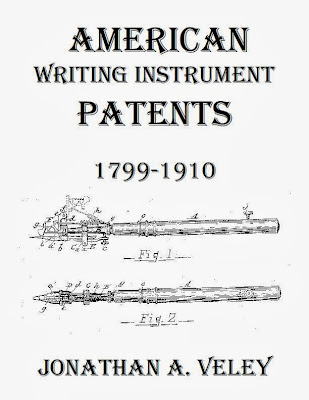 A couple days before the end of September I forced myself to put Leadhead's out of my mind and focus exclusively on writing just such a book.  I wanted it to be both usable and readable, so I wrote articles on general American patent history, on how to research patents and on how the words our Victorian predecessors used have evolved into the terms we use for pens, pencils and pieces today.   I even included an article on how I decided what to include and not to include in the book (question:  is a machine used to stripe tennis courts a "writing instrument"?).

And then I pulled together a massive amount of information together.  I started by going through every patent issued from the patent office opened in 1790 through 1910 in Category 401, weeding out the things that weren't pens, pencils or some other writing instrument as I went.   Then I went back through the blog here and pulled out all the patents that weren't in category 401, such as patents for clips, coatings or other integral parts of writing instruments).  Then I followed up in those categories to pull out a lot of the really obscure stuff.

The hardest part, however, was figuring out how to present the data so that it would be more than just a list.  I decided to create a massive spreadsheet, then resort the list in different ways so that the database is searchable by different criteria.  Here's the back cover: 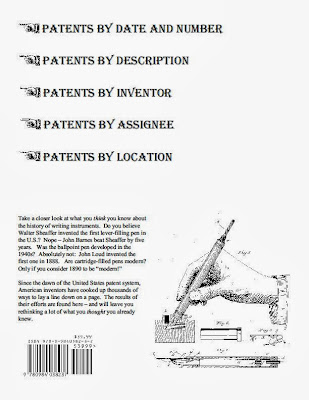 The thumb tabs will make zeroing in on the right patent faster than I believe has ever been possible before. However, even though this provides a massive amount of information, the 250-page list that was just about as much fun to read as a telephone book.

So, to add a few spoonfuls of sugar, I pulled out 85 of what I considered to be the most historically significant patents of the era (with the occasional irresistably goofy ones) and added full-page illustrations of the patent drawings from each, accompanied by a few short paragraphs to explain why they were as important.  Here's an example: 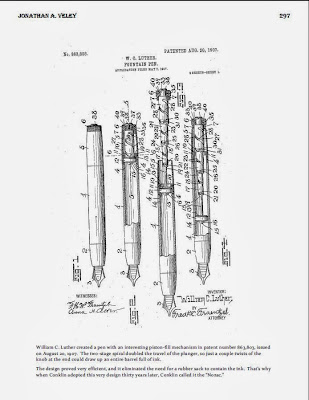 The last step, however, was the most important -- trial by fire in the field.  The Ohio Pen Show was this last weekend, and I had a copy of what I hoped would be the final draft of the book printed off in a 3-ring binder.  Joe Nemecek spent some time at Leadhead's Spread before and after the show, and we went through some examples he had on hand to make sure all the patents he knew of were in there, and they were.  Then, off to the show for four days of looking at obscure patent dates imprinted on barrels in the wild. I'm pleased to report that without exception -- every patent date I found imprinted on a pen or barrel and looked up in the book was right where it was supposed to be.

So today, with my beta tests complete, the finished project has been emailed to my publisher.  I'm told that the book will be ready in December, so I'm planning a formal launch at the 2014 Philadelphia Pen Show (for anyone that can't wait for Philly or isn't planning to go, yes I will make advance copies available).  The cover price will be $39.99, but through the Philadelphia show I'll offer it for $35 (plus shipping, if needed).

And yes, in answer to the question I've been asked quite a bit lately -- I'll be back with new stories soon.  When?  Well, today I cleaned off the kitchen table, so for the first time in weeks it isn't covered with notes, bits of paper, reference books and my laptop:  that will make Janet a happy woman.  But she still has a long list of deferred projects awaiting me for the day I wasn't up until midnight every night working away on this project, so after I get through all that, I'll take a few deep breaths and maybe a nap . . .

then I'll be back.  I've already got the first few articles written in my head.