Today’s pencils reminded me about yesterday’s Ernall, and that was because at the same time I was shooting the Ernall, a higher quality pencil about which I had little information, I also shot this: 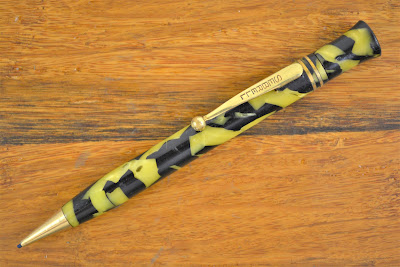 At some point along the line since then, I found a more streamlined example in a beautiful coral celluloid: 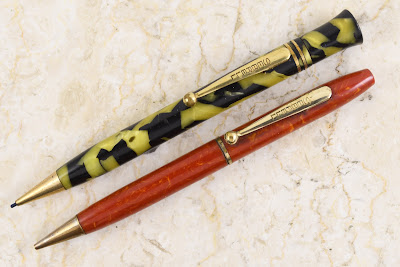 Both of these are marked “Sebrell” on the clips, and if these remind you of something Eclipse might have made, I think you are on the right track: 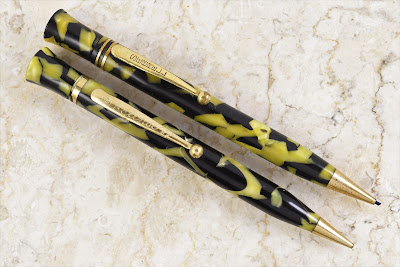 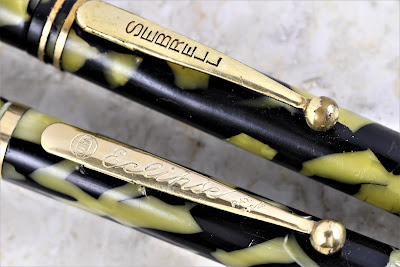 The Sebrell, like the Ernall, slipped quietly into my dead letter office after I couldn’t find anything about the brand.   Somehow, when I went back and rechecked this time, I got lucky thanks to a random observation “Jiffypens” made over in the old Fountain Pen Board forum eight years ago.  My pencils are marked only on the clips, but he had found a combination fountain pen and pencil: “The nib is marked "Sebrell, Los Angeles, CA" The barrel states it was made in Virginia though,” he reported.

That small detail, connecting two random locations of Virginia and Los Angeles, proved to be the key.  It led me to a biography for John Barkam Sebrell in the 1965 edition of Who’s Who in Commerce and Industry: 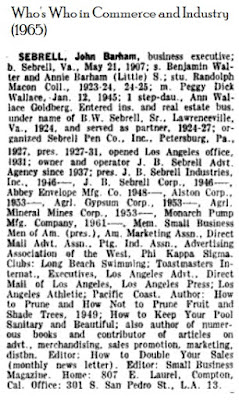 From Jiffypens’ observations, his barrel indicated it was made in VA, not PA – I think Sebrell Pen Company was in Virginia, not Pennsylvania.  John’s birthplace was named for his family in Virginia, and his early career was at a real estate firm in Lawrenceville, Virginia from 1924 until 1927.  Sebrell and Lawrenceville are both only about 50 miles from Petersburg, Virginia, where the Edison Pen Company was located (and later the Arnold Pen Company).

Petersburg, Pennsylvania, on the other hand, is a tiny town 350 miles to the north, and its population according to the 2010 Census was only 480 souls.  If Sebrell packed up and headed to that tiny spot to form a pen company, that would be a very random twist in his story indeed.

Once Sebrell opened his Los Angeles office, he appears to have stayed on the west coast for good.   His biography indicates that he was president of Sebrell Pen Company until 1931, and it’s a reasonable assumption that the tiny pen company failed during the Depression - or was sold to someone else who changed the name or only bought the assets.  In 1937 he opened his own advertising agency and he also formed a national association for small businesses called The Little Business Men of America.  On April 2, 1938, Sebrell made headlines advocating for government insured small business loans and simplification of taxes for those struggling to make it, in an article that reads like it could have been written yesterday.  Sebrell is identified as a “furniture and stationery dealer from Los Angeles”:

The article references that Sebrell was “almost forgotten since his three turbulent days in the Department of Commerce Auditorium in January.”   He was one of some 500 small business owners invited by then Secretary of Commerce Daniel Roper to attend a conference to discuss how government could help small business.  All across the country, news broke about those who had been tapped to attend:

The conference opened on February 2, 1938, and almost immediately descended into chaos and frustration.  The group was presented with 100 pre-written resolutions to approve, and it was announced that the President would work with a committee they would appoint – Secretary Roper was a bit obvious when he introduced Fred Roth, president of the Whitney-Roth Shoe Company of Cleveland, as their interim chairman of the group to lead their discussions.  Many of those in attendance quickly determined that Roper had “hand picked” Roth because he could be manipulated, leaving the government free to claim it was working for small business when in fact it was not. 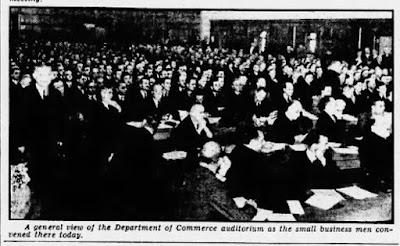 Roth may or may not have deserved the wrath that befell him – one member questioned how small his business really was (he answered that he employed 15 people).  Roth quickly bowed out as chairman, and the day’s discussions fell apart after that. 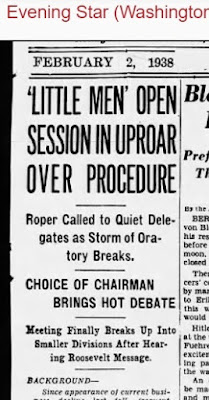 Cooler heads prevailed the next day – or more likely, everyone who realized the “conference” was a sham did not return for the second day.  Roth was made chairman of the committee, and more than 100 resolutions were passed unanimously – but only after a few delegates were ejected for disrupting the meeting. 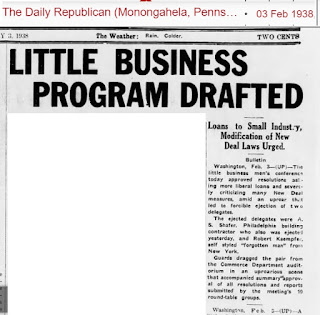 President Roosevelt was scheduled to attend the conference and address the assembled businessmen, but inexplicably found himself tied up with paperwork and unable to attend.  He did, however, meet with the 12 men of the committee on the following day, including the “hand picked” Fred Roth, to discuss the 100 resolutions which had been passed unanimously by those (left) at the conference: 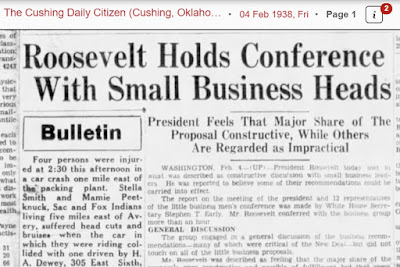 The story reads like it could have been written yesterday.  Businessmen from all over the country receive an invitation to come to Washington, at their own expense, and participate in discussions on how the governmnet deals with small business.  When they arrive, however, they are presented with a government-approved agenda, 100 pre-written resolutions to approve, and they are asked to rubber-stamp the government’s choice of chairman.

There’s no mention of Sebrell I found in the national press coverage of the conference, but the story that ran about him in April, in which he advocates all of the same points argued about at the conference, suggests that he shared the view of the dissent:  the government had simply invited him to Washington to ignore him in person.

All of this by the time he was thirty, having been in several businesses already.  How could the biggest “little businessman” accomplish so much at such a young age?  Perhaps he had some help . . . 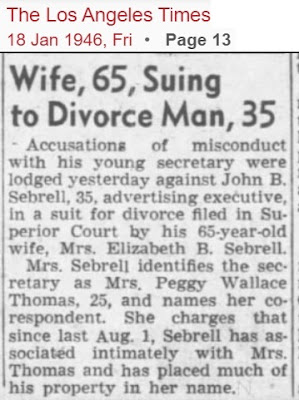 Having a wife that is thirty years older might have provided some resources to play with . . . which seemed to work well for him until Sebrell’s secretary, ten years younger than him, caught his attention.

The timeline doesn’t quite line up.  This article identifies Sebrell as being 35 years old in 1946, when according to his biography he would have been 39.  And as far as his secretary, Mrs. Peggy Wallace Thomas, his biography indicates he married her on January 12, 1945 . . . if that’s true, he had done much more than “associated intimately” with her and “placed much of his property in her name” by the time this notice was published a year later.

Email ThisBlogThis!Share to TwitterShare to FacebookShare to Pinterest
Labels: Sebrell