THAT Kind of Show

This article has been edited and included in The Leadhead's Pencil Blog Volume 3; copies are available print on demand through Amazon here, and I offer an ebook version in pdf format at the Legendary Lead Company here.
If you don't want the book but you enjoy this article, please consider supporting the Blog project here.
When Harry Shubin stopped by my table at the DC Show last weekend, he had already warned me in advance that he had a very unusual Parker Vacumatic that he needed some help with.  It was a demi-sized, stubby and chubby burgundy example with two bands - on the very early end of the Vacumatic spectrum, when the only thing that differentiated a Vac from a Duofold was the plastic.

The repair required one of the more sophisticated tools in a pencil repairman’s toolkit – the noble paperclip.  With that and the knowledge that giving a push here and a firm, insistent tug there wouldn’t break the thing, the tabs of the pushrod eased back where they were supposed to be and the problem was solved.

Harry’s pencil is special, and before he left he allowed me to photograph it next to a couple other special Vacumatic pencils that turned up at the show: 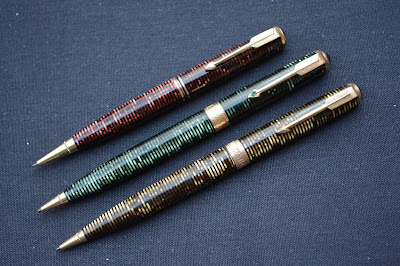 These other two, however, came home with me.  The first came from Pearce Jarvis, and I’ve been looking for one for years: 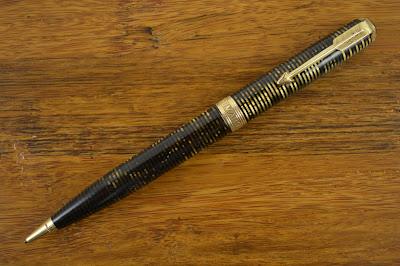 I’ve got a couple Vacumatic band pencils – a pair of prototypes I picked up a couple years ago that I suppose are more special than this (see “What Might Have Been” at http://leadheadpencils.blogspot.com/2014/09/what-might-have-been.html): 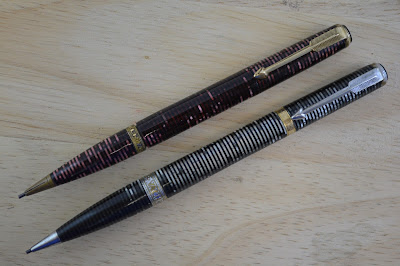 I’ll admit to pining for a “regular” production example, and this one is about as big and about as nice as one can hope for. 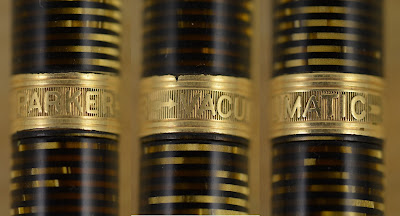 I enjoy getting a “wow” from people, and pencils like these don’t come along that often . . . so yeah, I probably showed this one to more people than cared to see it.  Even more fun than that was telling people, after they had seen this one, that this wasn’t the nicest Vacumatic pencil I found that weekend.

Yeah.  It was that kind of show.

With that introduction, I would show off this third one: 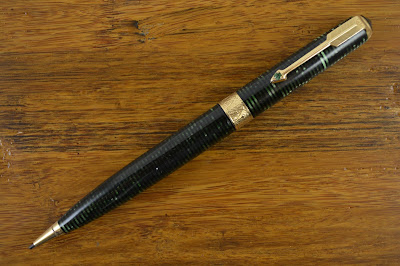 In all fairness, I didn’t find this one at the show.  Pete Kirby had emailed me a picture of it months earlier, and it had an appointment to meet me at the show.  I couldn’t pay Pete what he asked quickly enough.

The topic of debate over this piece is whether it was made by Parker at the factory or was a jeweler’s piece.  I think the polls were leaning in favor of factory production by the end of the day, myself included in the number that believe that.  What I can tell you is that the date code indicates third quarter of 1935: 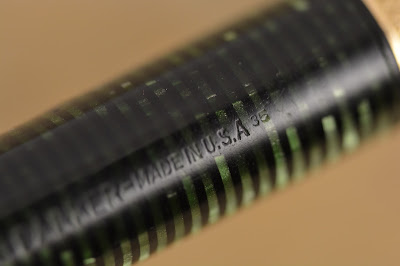 And all the trim is marked 14k – highly unusual for a Vacumatic: 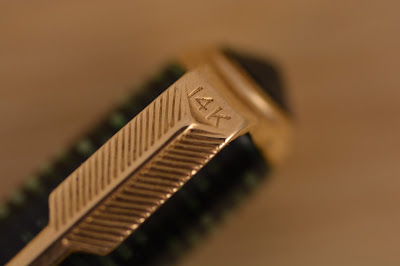 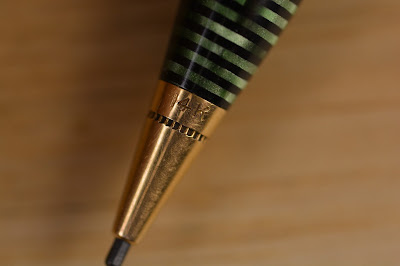 There is a stone set in the arrow of the clip, which ordinarily might suggest a jeweler’s modification . . . although a couple of the folks I talked to had a faint recollection of Parker doing this as a special order item.  A very special order. 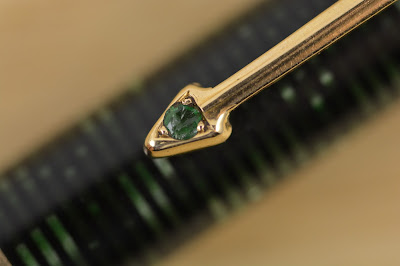 But what really stands out about this pencil, above all these other features, is that band.  If it was a jeweler’s work, it was one heluva lot of work.  A close examination reveals a 14k mark right where you’d expect to find it on a factory piece, as well as horizontal lines that indicate the band was either stamped or cast rather than being engraved.  Whoever made this had a pattern fitting this exact barrel circumference, since the pattern is uninterrupted all the way around. 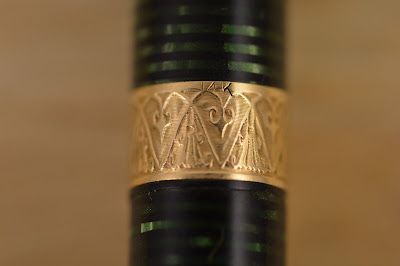 Those horizontal lines almost look like they are intended to discourage counterfeiting to me.  I’m hoping some day to find documentation that this was an original Parker piece – and with it, documentation of the very special occasion for which it was made.