Weird Eversharps are something that I love to chase down.  By this point, with so many oddities lurking in the Eversharp section of the museum, they almost seem normal – until, I suppose, you head out into the wild and try to find another.

I referred to these as “Tempoint Pencils” in The Catalogue (see page 60): 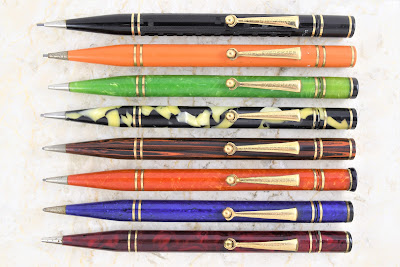 That was a nickname I gave them, since they represented the first time Wahl attempted to style its pencils to actually match the looks of the company’s fountain pens, and Wahl didn’t give them a specific model name.  Critics pointed out that by 1927, when these were introduced, Wahl was no longer using the name “Tempoint” with respect to its pens, so I’ve come to agree that “Tempoint-styled” pencils is perhaps a more accurate way to refer to them.

This image provides the known range of available colors, but there’s a wider range of variations than shown here – the woodgrain hard rubber pencils come with and without those gold bands near the nose, and there’s actually four variations of the black: hard rubber and celluloid, greek key chased and smooth.

That coral example has what looks like a funky bell shaped top, but that’s actually an original price “wafer” that was pushed onto the tops.  They were easy to remove and very infrequently saved, so even though the lettering is worn off the top of this one, I’ve decided to keep it as is.  (That wafer, and the differences between the later, longer clips shown here and the earlier shorter clips was covered in https://leadheadpencils.blogspot.com/2018/10/the-long-and-short-of-it.html).

Although that wafer isn’t weird, it seems that weirdness does swirl around the coral-colored pencils along these lines, like this one: 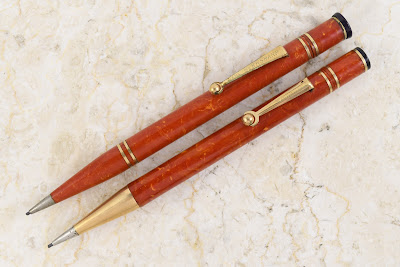 I’ve written about this one here before, back in 2014 (the article is in The Leadhead’s Pencil Blog Volume 3, page 13).  This hybrid has a shorter clip, consistent with earlier production, and a 1924-1925 nose seen on earlier oversized Eversharps: 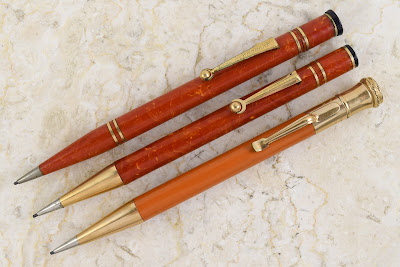 At the time I wrote that last article, though, I’d already been eyeing another weird coral Eversharp for more than a year: 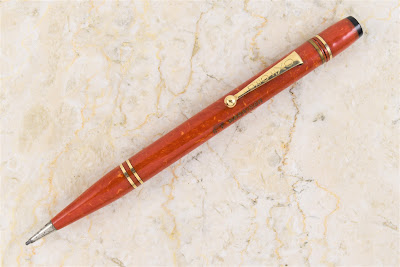 I first learned about the existence of this one in August, 2013, when user J-F-O posted pictures of it in the old Fountain Pen Network forum.  I told him if he ever grew weary of it to let me know, and within the last six months or so he finally did.

When it comes to Eversharp, like most other makers, the differences between its flagship models and lesser priced and subbrands existed mostly on the company’s fountain pens.  These two, apart from a couple interesting and minor differences, are mechanically identical. 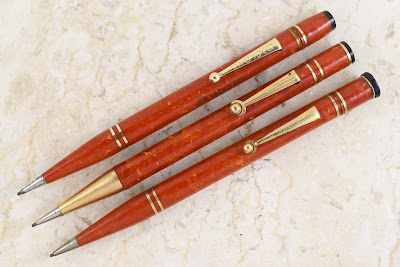 Note that the clip is marked “Oxford,” a name associated with Wahl’s cheaper subbrand of pens and pencils, and the terminus of the clip is a plain ball, rather than the more expensive roller clip.  And then there’s that top: 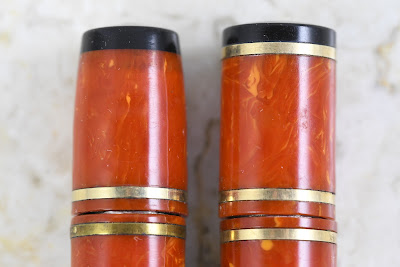 The top band is omitted, and the top has been streamlined slightly – likely to erase signs of the  channel in which the band would have been swaged. 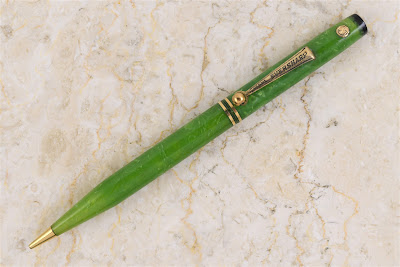 At first glance, it looks “normal,” but you might have noticed that this one isn’t quite flattop, and not quite Equipoised either, just like the coral Oxford.  The size isn’t quite right, either. 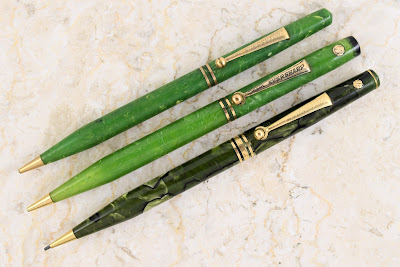 And neither is the trim configuration.  This pencil came my way from Jack Leone, who has a sharp eye for these things and actually had to point out to me what was special and different about it: 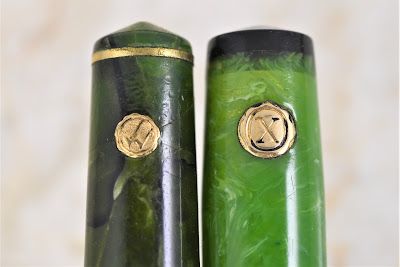 Instead of the usual Eversharp “double check” seal, this example has an unusual “X” seal, as collectors have nicknamed it.  There has been lively debate for years about what these seals were supposed to designate, with most of the discussion focused around whether it was some sort of a substitute for drilling small holes in the seal, something Eversharp did to void its lifetime warranty during the Depression in order to sell pens and pencils at a lower price, without that warranty.

I have another theory, backed up by physical evidence.  I’ve been looking at this pencil all wrong . . . the reason it doesn’t fit in with the Equipoised pencils is it isn’t an Equipoised: 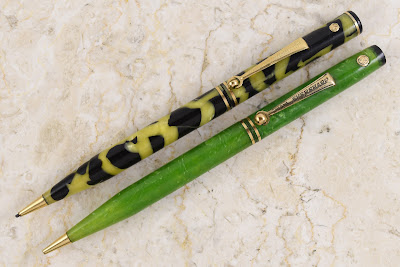 Late in production of the “Tempoint-styled” flattop pencils, the line was redesigned to a middle-joint pencil; inside, these pencils had the same works found on the Equipoised line, but on the outside, the styling remained essentially the same.

My “X-seal” Eversharp isn’t an Equipoised, it’s a modified flattop.  In the same way my coral Oxford had a slightly rounded top, so too this late-production flattop was rounded in order to void that top ring and the channel in which it would have been seated.

And since the only other example I have is lacking this seal, but has a clip marked “Oxford,” I don’t believe it’s an X-seal at all.  If you look at the border surrounding the letter, it isn’t perfectly round: 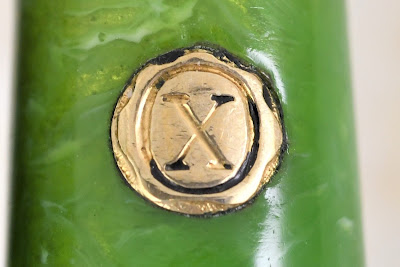 I think it’s an “OX” seal, short for Oxford, designating a separate model line made from modified Eversharp parts.
Posted by Jon Veley at 3:45 AM

The X or OX seals are seen on models other than Oxfords; The X seals are found at least on 1927-30 DECOBAND pens, 1930-32 Equipoised pens, etc - none of which were oxfords. Another explanation is that there was a documented huge liquidation sale held by EVERSHARP inc in 1939 during their financial "reorganization". During that, a thorough housecleaning, all old stocks of pens and parts were rounded up and cobbled together to liquidate (as in turn into cash) whatever could be made from them. As the "story" goes some stock parts were found in various stages of production. Some already had double check seals installed, they got drilled, others had the hole that the seal fits into cut but no seal installed. They got X or OX ("CLOSEOUT") seals.

I'm sure I'm repeating myself, but "Tempoint-style" is not a good choice of terminology. The Tempoint line was earlier and entirely different in appearance -- not least in being made in hard rubber only. "Signature-style" would be more appropriate; even though only a limited number of pre-Gold Seal flat-tops were actually part of the Signature line, in collector usage the term has expanded to become a generic tag for pens of that era.

As for the seals, Syd's observations militate against the Oxford theory.

Note that I have long argued against identifying the flat-top pens modified into pseudostreamlined form by the addition of tapered ends as members of the Equi-Poised line. I believe they were a parallel effort to get rid of old fashioned flat-top parts -- postdating rather than predating the introduction of the earliest true Equi-Poised pens (and pencils).

Syd, agreed and note the jade example at the end of the article has an Eversharp (rather than Oxford) clip. A 1939 parts cobbling would make sense, and a shortage of rings might have had them milling down the tops as noted. I'd love to see paperwork or notes that document what they were thinking, but it sounds like we agree this is XO or OX, not just an X with a ring around it?

Agreed on both points, David. "New Pyralin Pencils" might be the best, since the pens were referred to that way, I believe. It's unfortunate Eversharp left a vacuum so that a poor nickname like the one I gave them could stick.

On the "pseudo-tapering" issue, I think the oddballs in this article were only tapered enough to get rid of the recess where the upper trim ring might otherwise have gone, rather than being any serious attempt at streamlining. Note that in the picture comparing the jade oddball to Equipoised examples, nothing matches and I ruled that possibility out. The later production flattops with Equipoised innards, however, are an exact match.

There was also a series of pens with X seals that are neither modified versions of the earlier ring top pens, nor close out versions of the Gold Seal flat top (including Deco Band) pens. They have a unique design (some marked Wahl-Eversharp and others Oxford) and I can find no evidence they were catalogued or advertised (just as was the case for the ring tops modified to make them into longer, more streamlined side clip pens). In the absence of evidence to the contrary, I continue to believe that the X seals had two uses: initially to signify test market models, and later for close out pens sold without warranty. Also, I posit that the modified ring tops were produced between the early Equi-Poised models that Sheaffer said violated its design patent for the Balance, and the later tapered Equi-Poised design.