Too Keen to Throw Out

We have become a throwaway society.  Go to an office supply store, and most of the products you’ll see weren’t built for quality – they were meant to be used once and disposed of.  Sure, I know there’s modern “refillable” pencils that are widely available, your Pentels and your Zebras, but hold one of these things in one hand and a vintage pencil in the other, and ask yourself which one would be some thing you’d be proud to give to a favorite grandchild.

No comparison in my mind, but I’m biased.  Plus, unless you’re going to doodle moustaches on microfiche copies of newspapers, I’m just not understanding how people get pleasure out of writing with .3mm or .5mm lead.  Heck, I find .7mm lead to be . . . sterile.  Give me a good old 1.1mm pencil – and call it .046 inches please, since the metric system has no place in proper conversation – fill it with a nice soft lead . . . ahhh. . .

OK, my prejudice is showing.  I’ll move on, but not before I summarize my thoughts by saying that most of the pencils being sold today are being thrown out, and they should be.

The trend started in the 1950s, when Americans were ready after years of war for anything that made life more convenient.  Pioneering the field of disposable mechanical pencils, believe it or not, was Dur-O-Lite, which revived a venerable name it had used for decades – Keen-Point – and applied it to a single use pencil. 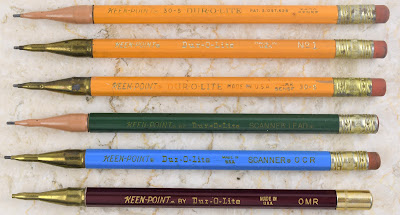 This picture is from page 84 of A Century of Autopoint, and as mentioned in the book, the new pencil with that weird, fleshy-colored nose was patented by Frank J. Stoeberl, who applied for his patent on July 7, 1960.  It would take three years for the patent to finally be granted, as number 3,097,628 on July 16, 1963. 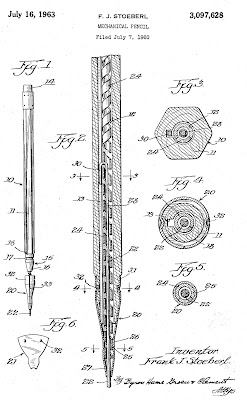 Yeah, they come in a few colors and a few variations, but in general I don’t get too excited about them.  They look cheap and feel cheap, because they were cheap.  Still, when this surfaced and it wasn’t too expensive, I thought it worth preserving: 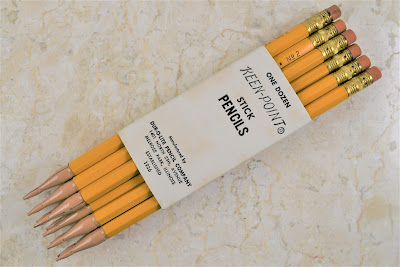 Cheaper by the dozen, I suppose.  Since these were meant to be consumed rather than used, I thought it unusual to find a complete dozen of them, complete with a cardboard band to hold them together: 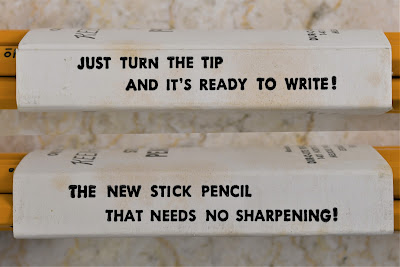 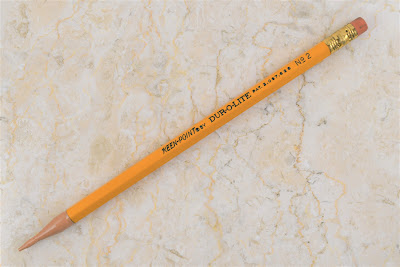 Now these next examples cost a bit more.  They went ‘round the horn on ebay so many times with me almost biting on them that I don’t remember whether I bought them because the price finally dropped, or whether I was that tired of looking at them: 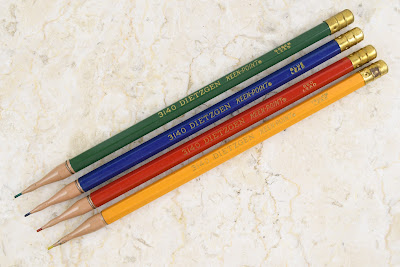 The Eugene Dietzgen Drafting Company was set up as the Eugene Dietzgen drafting company at the end of the 19th Century; Dietzgen had emigrated to the United States from Germany in 1881, sent by his father, the socialist and Marxist philosopher Joseph Dietzgen.  Joseph was looking for a way to secure his papers and documents from the authorities in Germany, and Eugene may have been trying to avoid the military draft.

In America, Dietzgen prospered as a capitalist . . . although perhaps as a hat tip to his father, his manufacturing facilities included some forward-thinking innovations for the comfort of his workers, according to Wikipedia, “includ[ing] separate bathrooms for men and women, open windowsills with flowers decorating the air, and a general atmosphere of a healthy working community.”

Dietzgen is a company best known for making slide rules, compasses and other drafting tools, and you’d expect that company to relish in the sorts of skinny lead precision instruments you’ll find today, rather than a cheap throwaway.  And engineers being such a persnickety bunch, you’d think they wouldn’t need the guidance imprinted on these pencils: 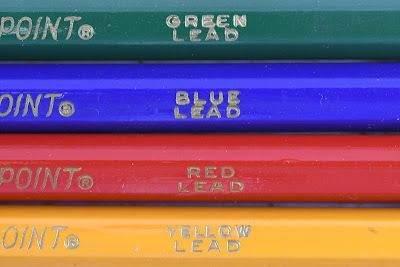 Thanks, captain obvious.
Posted by Jon Veley at 3:45 AM