When this one turned up in an online auction, I was quick to place a placeholder bid – one of those you put in just so you get an outbid reminder to prompt more serious pursuit.  In this case, I bid just enough so that it wouldn’t sell for a price so ridiculously low that I’d be kicking myself. 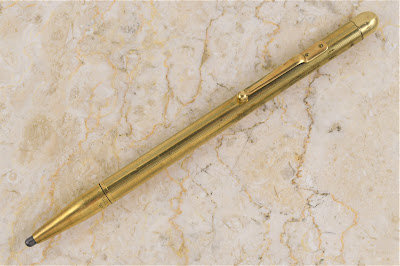 When I came back around for serious pursuit, the little angel on my one shoulder was arguing with the devil on the other.  “Go on, bid heavy, he’ll never know,” the little guy with the pitchfork was saying.  I like that guy.

But here was that annoying little conscience.   “You need to call Larry Liebman and let him know about this one,” he said.

I knew that little harp jockey was right.  I hate that guy.

Larry has a distant family relation to the Louis Tamis jewelry firm, so whenever an LT & Son pencil comes around, he’s the first one to pounce – and I don’t think I’ve been successful getting one in the years since I’ve known that. Yeah, I know . . . I’m just as happy with a picture as I am owning the pencil, I tell myself, and Larry is very generous with information and photo opportunities, so I shouldn’t hesitate to pass if Larry wants it.

I tell myself.  I wasn’t listening.  What I was hearing was more along the lines of “But this one would look sooooo nice alongside the sole example of the LT & Son in my collection . . . and complements the Victor pencil I just wrote about sooooo perfectly . . .” 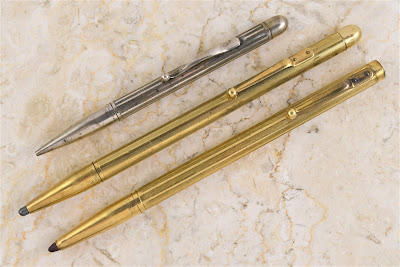 “You sure you want to tell him?  It looks terrribly inviting . . .” the little devil was telling me.  That little devil can even roll his r’s.  Dang, he’s cool.

Nevertheless, I mustered the fortitude to tell him to get lost, and I called Larry.  Before we spent the next 45 minutes solving the world’s problems, I pointed out the auction to him and his reaction surprised me.

What?  I took another look at the auction listing and I was reminded of an anecdote I’ve told here before, about one of my mentors who cautioned me as a young lawyer to always read what’s actually there.  Not what should be there, and not what you think is there . . . what is actually there. 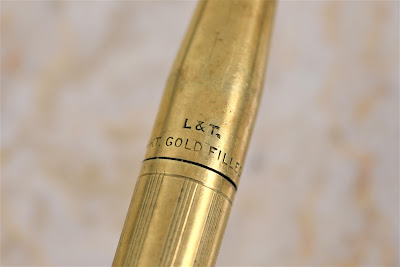 What what?  Larry and I spun our wheels for a minute trying to think what that could mean, until it dawned on me exactly what it is . . .

It is THE perfect opportunity to tell you THE singularly most famous joke in all of pen(cil)dom, enshrining forever the legacy of the man who made it famous: Paul “Poobs” Erano, Grand Poobah of the Black Pen Society.

Paul, in addition to his substantial official duties, also tends to be one of the pack leaders amongst those of us who tip a few glasses of grape juice and chew gum together during our after-show activities.  (That’s for the kids.  It ain’t grape juice and you can’t smoke chewing gum.)  Invariably at some point in the evening, before we’ve drunk our fill and burnt our fingers on the nubs of good cigars, someone will let it slip that they haven’t heard “the” joke.  Lee Chait would roll his eyes and say “not this shit again!”

And then, just like that, it would be this shit again.

Paul will call the assembled to order, sometimes standing ceremoniously with his cigar hanging out of the side of his mouth, arms outstretched like Charlton Heston.  “Hey everyone!  This one hasn’t heard the joke yet!  Shut up and listen!”

And then he will start.  Now I’m going to try and do it justice, but I can just hear Paul correcting me as I write this -- “Jahn... Jaaahn...”

So Jesus Christ is walking down the street. He's got this big sermon on the mount coming up, and he looks down at his robe and notices that it's absolutely threadbare. As fate would have it, he just happens to be passing by Sid's tailor shop, so he walks in and says, “Sid, I’ve got this big sermon tomorrow. You think you can fix me up with a new robe?”

"For you, Jesus?" Sid says. "No problem! Step right up here and I’ll have it done in no time."

An hour later Jesus looks down at the robe and says, "Sid, I can't believe it. You really outdid yourself.  It's beautiful!  What do I owe you?"

“For you Jesus?  No charge,” Sid tells him.  But then he thinks for a second and adds, “Come to think of it, you got that big sermon on the mount tomorrow, right?”

“There’s going to be lots of people there, right?”

“Well, if you really like the robe maybe you could put in a good word for me?”

“No problem! It’s the least I can do,” Jesus says. "It's really beautiful!"

The next day Jesus is on the mount giving his sermon, and there's a lot of people there.  I mean multitudes.  They've got fish, loaves of bread . . . the whole nine yards. And when Jesus is finished, He holds up his arms (you might have seen the statue) and he says, “By the way, you see this robe?  Sid made it for me. He does fantastic work!”

The next day, Jesus is walking by Sid’s and he can’t believe what he sees.  The line is out the door and all the way down the street [Editor’s note: when one pen show was at a hotel that was particularly out of the way, I remember him saying “almost as far as to this **** place”].  Jesus catches Sid's eye and says, “Sid, it looks like that little plug really paid off for you.”

“Jesus, I’ll say! Maybe we ought to go into business together.  We'll call it ‘Sid's and Jesus.’”

“Sid,” says Jesus, "don't you think we ought to at least call it Jesus and Sid's?"

“C'mon," says Sid. "You're Jesus Christ for heavens sake! You ought to be able to come up with a better name than that!”

Jesus thinks for a second as a wry smile lights upon his face.

“What do you say we just call it Lord and Taylor?”

Most of the time, no matter how many dozens of times we’ve all heard this joke we are rolling on the floor laughing . . . whether due to the amount of booze, or Lee Chait’s reaction, or watching Erano (the biggest fan of the joke) crack himself up.  On those rare occasions when there have been only crickets chirping in response to the punch line, Paul would say something like,  “Aw, to hell with you guys. You’re all just a bunch of idiots anyway.”  That will do it even if the joke doesn’t.

The L & T hallmark on my new pencil just has to be a Lord and Taylor.  There’s no other explanation.

And even if I ever find a better one, I’ll still call it that.
Posted by Jon Veley at 3:45 AM

Any significance to the period after the T, but not after the L?

I don't know. Maybe just a touch of finality.