I’ve been posting a lot of articles lately about “broker’s pencils,” those metal pencils sporting impossibly, overcompensatingly large leads from the likes of Hicks, Edward Todd and others.  As I was thumbing through my archive of old pictures I never got around to using, I thought it was kind of a shame not to share this one with you: 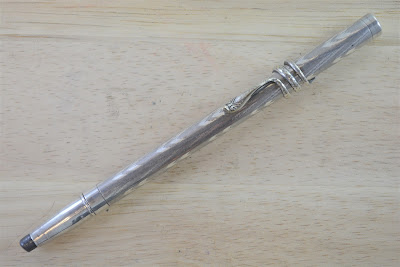 Snake clips are always a crowdpleaser, and this one probably tips you off who made this one: 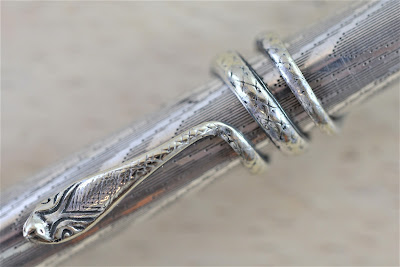 That clip, identical to clips used by Frank T. Pearce, were later picked up and put into production over at A.T. Cross.  Frank Pearce was a former employee of Cross who, after a few years in friendly independent competition (but more collaboration), died unexpectedly – sadder still, so did his son, and Cross appeared to absorb what remained of the organization.

There’s been a couple articles here about those snake clips, and George T. Byers’ attempt to usurp them from Cross by filing a bogus design patent after Pearce was already using them and then suing for infringement – check out http://leadheadpencils.blogspot.com/2015/03/the-snake-that-wasnt-wrapped-around.html.

At the top, there’s confirmation that this is a Cross – and another opportunity to point out that “AXT” represents A. T. Cross (seems like no matter how many times I say that, the meaning of those letters somehow continues to elude a lot of people). 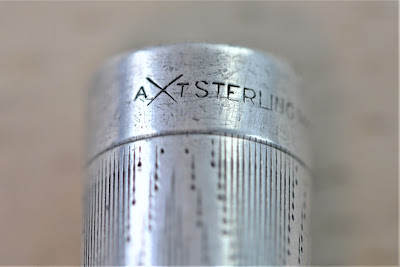 And it is enormous, a big honkin’ baseball bat of sterling.  Here it is, next to an average-sized Cross pencil: 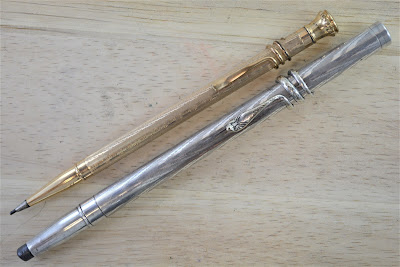 Note that the regular sized pencil has a plain clip, snake-like but without animal features.  These were produced, I believe into the 1930s.  The elaborate clips Frank Pearce was using in the early 1910s, however, had long since been discontinued by that time.

I’m not sure why I never used these - I think I had a lead on a gold-filled example that never panned out, and I thought they would look so nice shot alongside each other that I decided to wait and see if a gold filled example came my way.  All these years later, guess it never panned out, although a gold filled Cross stockbroker did make it into the blog back in 2012 when I featured the example Jim Rouse had with him at the Baltimore Show that year (see The Leadhead’s Pencil Blog Volume 1, page 190). 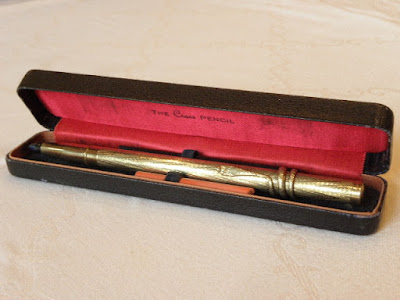 Eh - if another one ever finds its way over here, we’ll make another lazy Sunday out of it.