Connected . . . in an unexpected way

This article has been edited and included in The Leadhead's Pencil Blog Volume 5; copies are available print on demand through Amazon here, and I offer an ebook version in pdf format at the Legendary Lead Company here.
If you don't want the book but you enjoy this article, please consider supporting the Blog project here.
I’ve got an update for you regarding these aluminum spiral pencils: 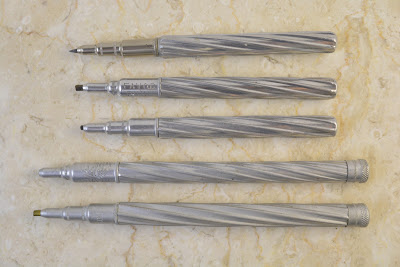 When I first wrote about these nearly five years ago, it was about the top example in this picture, marked “J.E. Mergott Co.  Newark N.J.”: 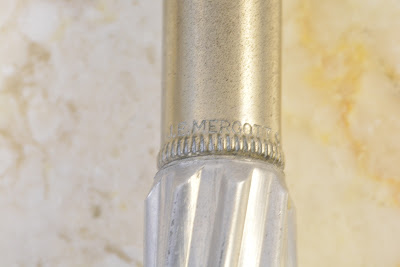 That article (http://leadheadpencils.blogspot.com/2012/07/one-of-few-metal-specialties.html) explored whether this pencil was one of the “few metal specialties” made by Mergott, a company better known, both at the time as well as today, for making metal frames for ladies’ handbags.  But then along came other examples, marked with a patent date of May 21, 1912, either on the end of the stubby barrel or on the top of the cap: 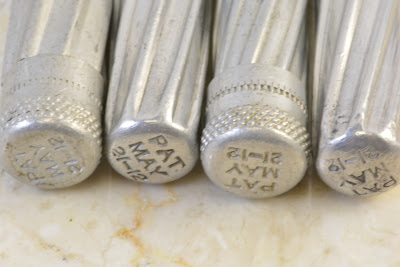 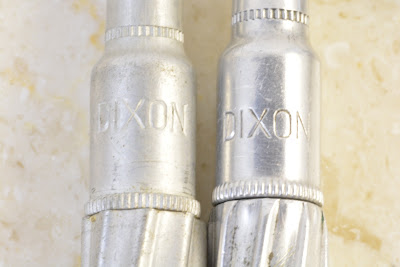 The patent date refers to design patent 42,533, issued to Frederick W. Tolfree and assigned to the Joseph Dixon Crucible Company: 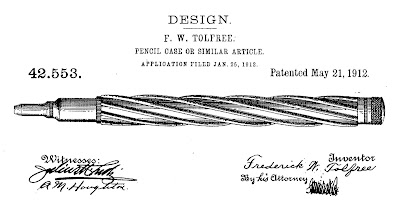 Between the design patent and sizing up whether Dixon or Mergott were more likely to have made pencils, I concluded that Dixon was the likely culprit.

The other two pencils in this grouping are (what I thought were) advertising pieces, along the lines of Joe Nemecek’s example marked “H.W. Baker Hotel Linens” from that last article: 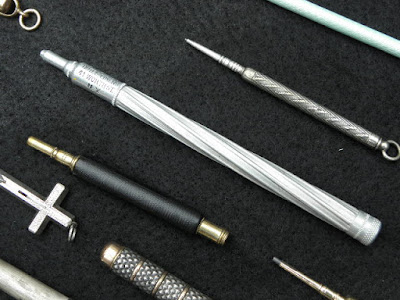 The longer one of my new examples is marked “Be wise / Aetna-ize,” a slogan used by the Aetna Life Insurance Company beginning around 1914: 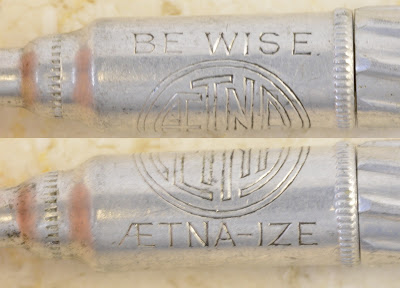 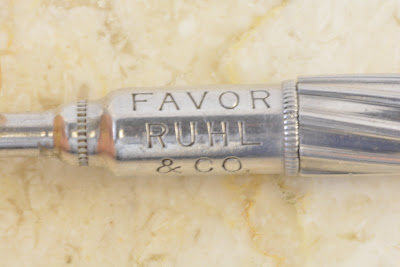 Both of these I’ve had for a couple years.  Since neither of them changed my opinions about who made the pencils, I didn’t think them important enough to write about - although that Aetna one narrowly missed the cut because the imprint is so cool.

But then along came this one in this week’s mail: 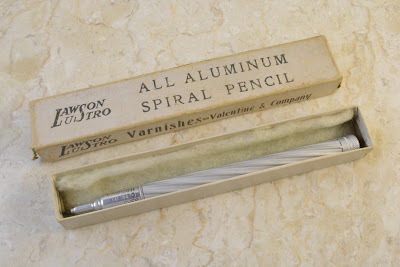 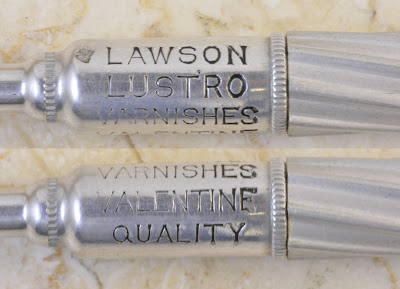 I initially assumed, like those last two,  that it was another Dixon-made advertising piece.  But when it arrived, I noticed one curious detail: 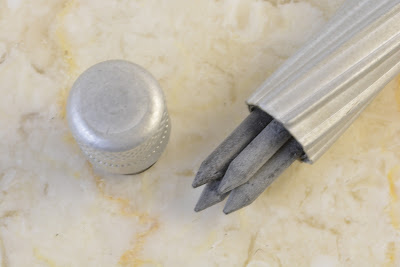 In addition to the four perfectly preserved, pre-sharpened leads in the chamber, note that there’s no patent date on the cap.  Since the only other one of these I’ve seen without a patent date was the original Mergott example, I decided to dig around a bit and see what I could find.

As a result, I’ve gone from thinking J.E. Mergott made these, to Dixon, and back to Mergott.

First, a bit about Valentine & Company and their line of “Lawson Lustro Varnishes.”  Samuel Tuck formed a “Paint and Color” firm in Boston in 1806, which was later acquired by Augustine Stimson.  Lawson Valentine founded Valentine and Company, also in Boston, in 1832, and within a few years the two firms merged: 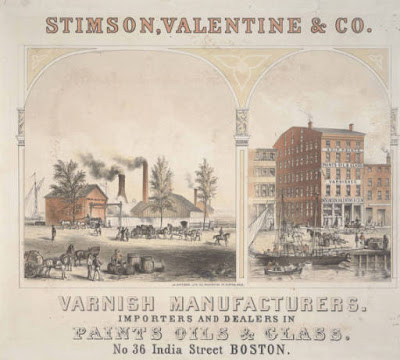 In 1866, after Stinson retired, the name was changed back to Valentine & Company, and the company at some point moved to New York.   “Lawson Lustro” was Valentine & Company’s  house varnish which was advertised, with that distinctive logo, around the same time the spiral pencil’s design was patented: here’s an advertisement from December, 1911: 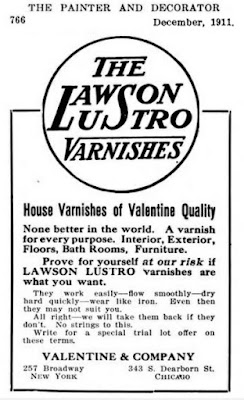 Valentine & Company also developed paints and varnishes for use on carriages and, later, carriages of the horseless kind.  Here’s an advertisement for the companies automotive varnishes, from the June 15, 1916 issue of The Horseless Age: 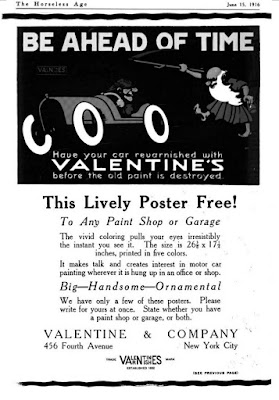 Where Valentine & Company really made its mark, however, was in the production of varnishes specially formulated for the marine industry.  In harsh marine conditions, varnishes needed to be especially impervious to water and also flexible enough not to crack and peel on the wooden parts of ships.  Nowhere was this more critical than on a boat’s spar – the wood pole securing the bottom of a sail – which would bend and flex dramatically with the wind.  Valentine & Company came up with a special and uniquely successful spar varnish between 1905 and 1906, and the company marketed the new product under a catchy tradename: Valspar.  Here’s an advertisement from the April, 1910 edition of Power Boating: 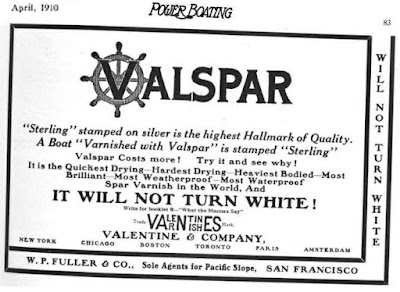 That’s right, folks – Valspar paints, ubiquitous in home improvement centers, are named after Valentine & Company’s line of spar varnishes.   In 1932, Valspar Corporation was formally incorporated, with Valentine & Company remaining as a lesser-known subsidiary for a time.

But that’s not all.

When I started researching whether there was a connection between Valentine & Company and the Joseph Dixon Crucible Company, I found one, but not where I expected.  Dixon appears side-by-side with Valentine & Co. in many of the same trade publications, such as The Horseless Age and Power Boating – but not for its pencil business: 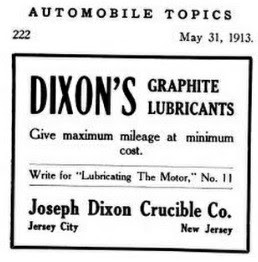 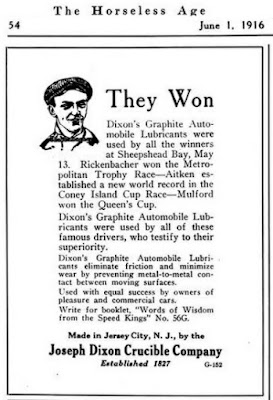 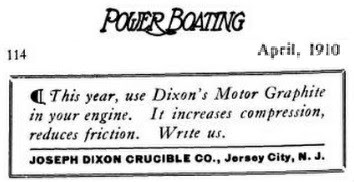 Graphite, in addition to being the stuff that makes pencil leads write black, is a natural lubricant, which Dixon processed and sold as an engine lubricant for both automotive and marine applications.  In fact, Dixon and Valentine may have been even more closely related than just their affiliations as advertisers in automotive and marine circles:  Dixon also marketed a line of graphite paints, made with flakes of graphite (rather than lead or zinc):

Wait a minute.  Maybe I’ve got this all wrong.  What if these spiral pencils marked “Dixon” aren’t made by Dixon, but are advertising pencils, made by someone else on behalf of Dixon, to advertise the company’s lubricants or graphite paints?

I went back to do some checking on Frederick W. Tolfree, the man who took out the design patent for the spiral pencil and assigned it to Dixon.  I could only find one reference to him, in Dixon’s in-house magazine, Graphite, published between 1907 and 1910.  He appears on the masthead of the June, 1907 edition, as the “Superintendent of Brass and Rubber Works”:

But I could find no indication, in Graphite or anywhere else, that Dixon dabbled in machining aluminum.

I next checked on the other advertising pencils that have turned up.  Joe’s example with Baker’s Hotel Linens and my “Be Wise Aetna-ize” pencil are what they are . . . nothing interesting to report.  However, my example marked “Favor Ruhl & Co.” raises some interesting questions: Favor Ruhl & Co. was an artist’s supply house, located at 73 Barclay Street in New York.  The company also had a Chicago Branch, located at 425 South Wabash Company, and their 1910 catalog is available online at archive.org (See https://www.google.com/url?sa=t&rct=j&q=&esrc=s&source=web&cd=1&cad=rja&uact=8&ved=0ahUKEwiKqMjXxPHSAhWI3SYKHSyjDZ4QFggaMAA&url=https%3A%2F%2Farchive.org%2Fdetails%2FCatalogOfFavorRuhlCoChicagoBranch&usg=AFQjCNGAdxUYF_UuYWiXfVjREkFyKwSPMg&sig2=LZ4twtViojdrLLiVQCZ5oQ&bvm=bv.150729734,d.eWE). 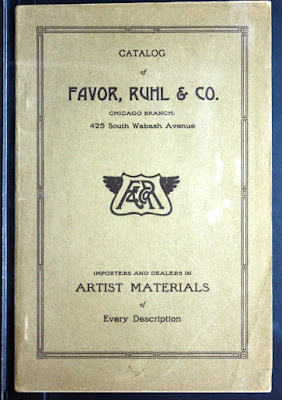 The catalog reveals that Favor Ruhl & Co. offered both house brand items as well as name brands from other companies.  Although there’s no aluminum spiral pencils in this one, there are L.&C. Hardtmuth leads, Venus pencils by American Lead Pencil Co., Faber erasers, and Eagle Pencil Company compasses.  My Favor Ruhl & Co. pencil has the 1912 patent date stamped on the end, so a later catalog might list them – but I thought it telling that there were no Dixon products listed in Favor Ruhl’s catalog.

Valentine & Company, however, provided the most insight.  In addition to aluminum spiral pencils, there are Valentine Varnish tokens . . . 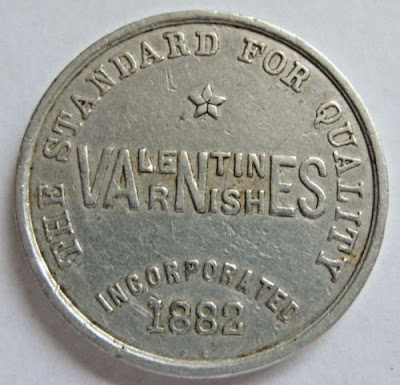 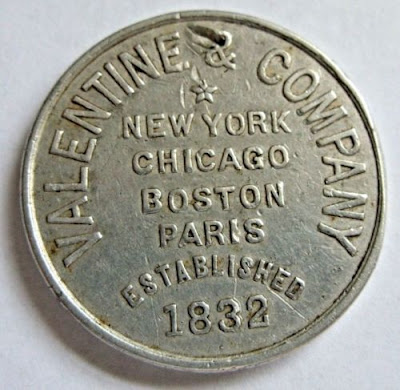 . . . also made of aluminum.  Even if we assume Dixon got into the business of making advertising pencils for other companies – including an artist’s supply house that would have offered quality Dixon pencils under the Dixon name – it’s extremely unlikely that the company delved into making other advertising trinkets out of aluminum.

Hmm, I thought.  Maybe it’s time to take another look at J.E. Mergott, the company whose name was stamped on that first, unpatented spiral pencil which started this whole business.  We know the company best remembered for making metal handbag frames made “other metal specialties,” but is there evidence that the company made advertising trinkets, too?

The September 17, 1914 edition of Printer’s Ink reported that 33 new members were accepted into the National Association of Advertising Specialty Manufacturers, including . . . the J. E. Mergott Company.

Dixon, on the other hand, was interested primarily in graphite and its applications, including wood pencils.  Until these spiral pencils came along, I never entertained the notion that Dixon manufactured any mechanical pencils until the company’s acquisition of Rite-Rite in the 1940s.

In my first article on these pencils, I’d concluded these aluminum spiral pencils were probably made by Mergott.  In later installments, I’d changed my mind to believe they were made by the Joseph Dixon Crucible Company, based solely on the design patent assignment and the fact that two were found marked “Dixon.”

Now, I think the evidence pointing to Dixon as the manufacturer isn’t as strong as I previously thought.  When I string all the clues in this story together, it looks like there’s two likely scenarios: the first is that Mergott was the true designer and original manufacturer of these pencils, which the company made both on its own account and for other companies such as Valentine & Company; Dixon’s trade show ties with Valentine through the automotive and marine industries would naturally have led Dixon representatives to see these pencils and conclude, naturally, that if anyone running in Dixon’s circles were offering advertising pencils, it should be Dixon.  We’ve seen other instances where people took out design patents on things clearly made by others, most notably George T. Byers’ attempted appropriation of the Pearce snake clip in 1914 (see http://leadheadpencils.blogspot.com/2015/03/the-snake-that-wasnt-wrapped-around.html), and Dixon may have muscled its way into the scene, licensing someone else’s design back to them.

That’s the more colorful scenario, but I think that’s the less likely of the two.  A more plausible explanation is that Dixon’s Frederick Tolfree was in fact the designer of these pencils, which Dixon intended to offer both on its own account as a pencil maker as well as advertising for the company’s graphite paints and lubricants.  However, since making things such as this was a bit outside Dixon’s normal operations, the company had the pencils made by J.E. Mergott, which also made them under license for other advertisers as well as a small number on its own account, along with other go-withs, such as aluminum tokens and puzzles.