A Little Bit of Closure

I probably paid too much for a lot of metal pencils in an online auction, because I really wanted to add this one to my collection: 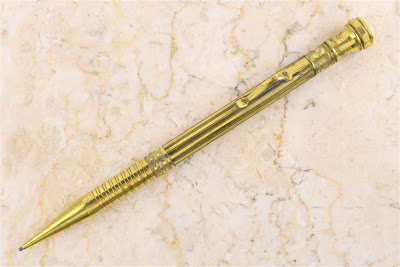 It’s an Artpoint pencil made by the Dollarpoint Pencil Company of Los Angeles.  Back on April 23, I showed off a salesman’s kit with a shorter model of this pencil in that green gold fill, and I thought it would be nice to have each of the three known sizes: 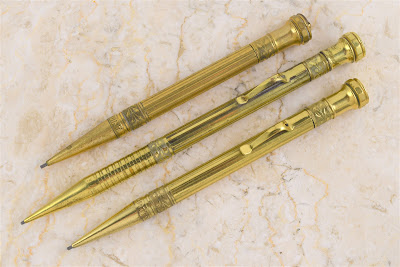 But there was another reason I wanted a full sized model in that gold fill.  At the end of 2016, I posted several long-forgotten newspaper advertisements for the brand (see https://leadheadpencils.blogspot.com/2016/11/what-became-of-dollarpoint-revealed.html), including this one: 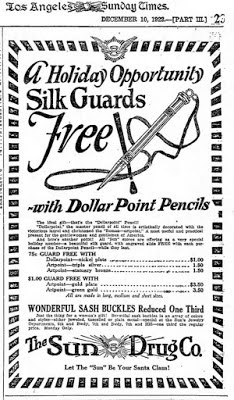 This Sun Drug Company advertisement, which ran in the Los Angeles Times on December 10, 1922, is the closest thing we have to a catalog of Artpoint and Dollarpoint models, and it identifies Artpoints in three sizes and four materials.  The cheaper Dollarpoint line was available only in nickel plate, but Artpoints were available in “triple silver,” “statuary bronze,” “gold fill” and “green gold” (I noted in the article that since the gold fill and green gold models are listed at the same price, it must mean green gold filled).

I thought I was finally going to get to show you all four materials in the same pencil: 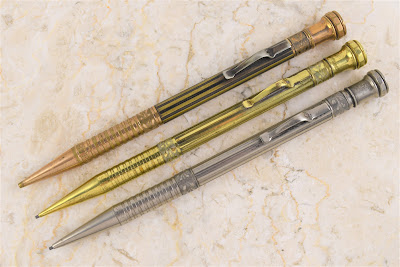 Crap.  That makes two examples in green gold - I thought my other one was regular gold plate.   So, this will have to do for the time being, as much as it irritates all of my OCD tendencies: 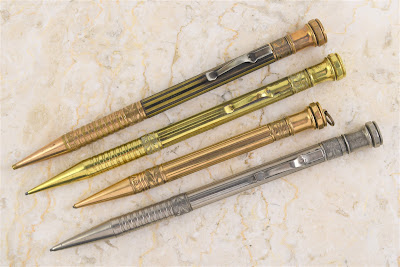 Sigh.  That’ll have to do for now.