My friend Brian Nichelson had a good eye when he spotted this in a larger lot of pencils. 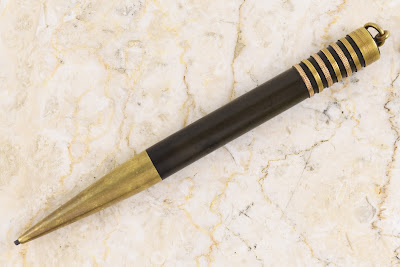 He says he knew immediately - and correctly - that it is a Mabie Todd “Fyne Poynt” pencil.  When he listed this one for sale all on its lonesome, he was correct when he indicated in the listing that most of the time, Mabie Todd didn’t mark its smaller pencils. 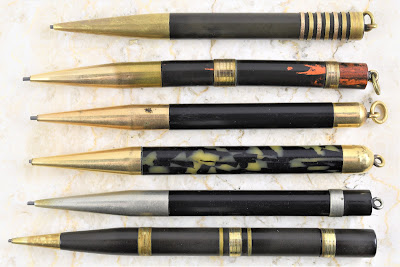 For some reason, Mabie Todd had something of a blind spot with the quality control on their smaller stuff.  You can see that rosewood hard rubber example is . . . well, as Rob Bader would say, it writes around corners.

Brian made one other observation in his listing: that the pencil appeared to match the Mabie Todd model 142/31 fountain pen.  Wow, I thought to myself, that’s some pretty advanced knowledge!  He had just had that pen pass through his hands, so he included a picture of that pen in his listing for reference purposes in the listing.  It did have very similar bands - but not exactly – and therein lies the rub.

Collecting these banded, hard rubber pencils is fun, but it can be a little bit aggravating.  The variety you’ll find is so wide that it almost looks like the company was just slappin’ rings on there at random – so until a comprehensive catalog turns up to show us what was supposed to be what, there’s no way to know what’s supposed to be out there or what any of these were called.  Plus, it gets really, really hard to remember which configurations you already have: 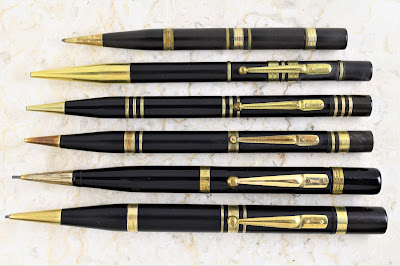 The only catalog available that is any help at all is in the PCA library, but it doesn’t list these fancy ringed pencils. 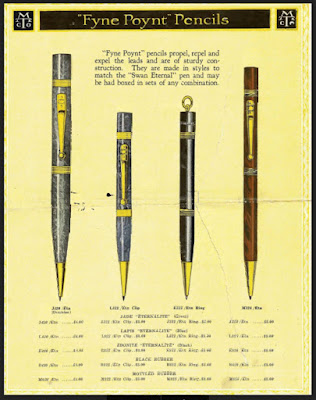 By 1927, when this catalog was printed, either the fancy ringed pencils had been discontinued, or they were reserved for a separate catalog. From this, at least we know that by 1927, the long metal nose had been abandoned in favor of a tapered barrel and shorter nose.

I went back to my old standby, Mabie in America by David Moak, and he dedicates a section of his book to “Black and Gold Pens” such as this.  There I learned (1) model designations were stamped on the barrel ends of the pens, but the pencils were unmarked, and (2) model numbers do not appear to be consistent.

Moak illustrates a wide selection of pens and pencils, and from what he had he concluded that full size pens were assigned model number 14x (with x being the size of the nib, so for example one with a number 4 nib would be model 144) and ladies pens were either 19x or 29x.  As for the second part of the model number, numbers running between 30 and 35, David suggests these were likely style numbers – but from the examples he had, they don’t appear to be consistent.

As I look through David’s pictures and ponder why that is, I think there’s a simple answer.  On every one of these pens, all the bands are on the cap while the model number is stamped on the end of the barrel.  If there are inconsistencies, in my opinion, it’s only because over the last century caps have been mixed up or replaced.

Of course, since none of the pencils have model numbers stamped on them at all, who knows what Mabie Todd called them!

Only one of the pencils in that last group shot has an exact match in Moak’s book, and since I bought most of the pencils in Moak’s collection, it might be the same one: that one with the long nose, second from top, is a match for the pencil shown with a model 142/30 pen.

The trim on these have a bit more pizzazz than Mabie Todd’s products both before and after this series.  The clips, in addition to having Mabie Todd’s “Fyne Poynt” name on them, have some nice detailing around the edges: 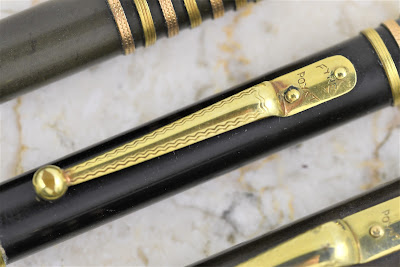 And that one fourth from the top has another really interesting feature – it looks like the trim has been deliberately colorized to give the appearance of two-tone rose gold/yellow gold trim: 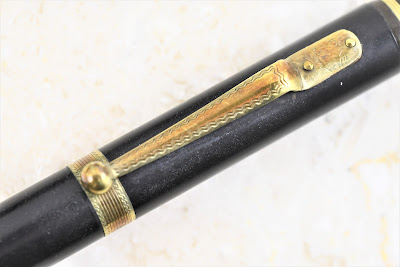 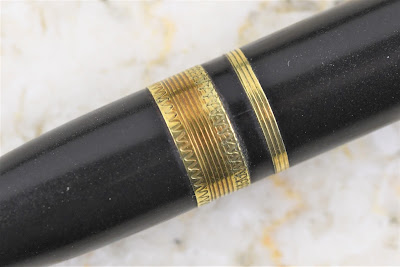 That brings me to the reason my new find wasn’t posed along with the others in that last group – instead, it goes alongside these, where it belongs: 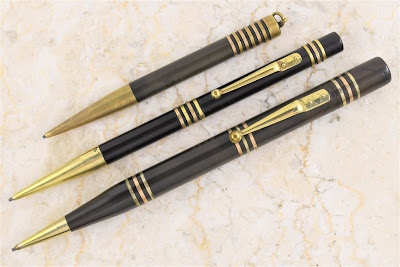 I could see something in Brian’s auction pictures that really had me fired up – a subtle detail that’s very easy to overlook: 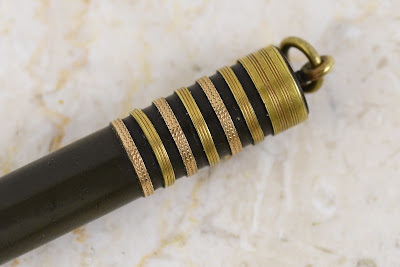 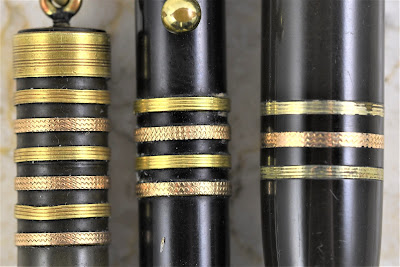 Or whatever the hell we want to call it, until a catalog surfaces to give us the formal name!