The Widest Range in the Narrowest Market

In April, 2018, I identified the producer of  “Supremacy” pens and pencils along these lines: 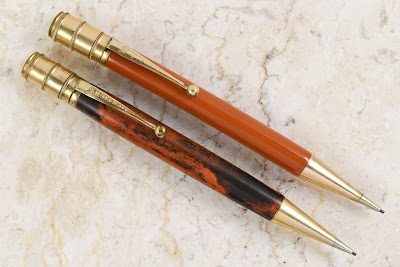 The article is still live and identifies the Supremacy Ink Company, successor to the W.L. Henderson Ink Company of Medford, Massachusetts as the company which used that very same Supremacy logo in old English-Robin Hood looking script (see https://leadheadpencils.blogspot.com/2018/04/weve-all-had-it-wrong.html).

And the Henderson Ink Company had pens and pencils made for and supplied to it by . . . drum roll . . . The Rex Manufacturing Company of Providence, Rhode Island.

Most Supremacy pencils are like those in that first picture; oversized, often bearing the “four horsemen” patents I’ve discussed here quite a bit (check out The Leadhead’s Pencil Blog Volume 1, at page 103 . . . and the sad part is I knew the volume and page without looking it up at this point!).  However, Supremacy was one of Rex’s earliest and best customers: 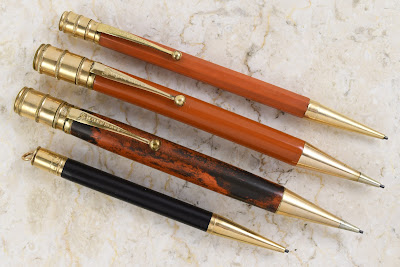 The lower pencil, a ringtop, has McNary’s early patent of February 19, 1924, which ranks Supremacy among the earliest Rex customers . . . I’m sure there’s an even earlier metal pencil out there somewhere, but I just haven’t turned one up yet.  The top example is what’s really interesting: it’s a thin model, but in the later incarnation using the “four horsemen” patented innovations.

After that last picture was taken, I managed to score a full length Supremacy in 1924 patent configuration - here it is, alongside that ringtop and the red full-sized slim model from above: 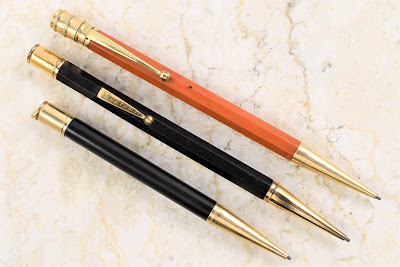 Note that the distinctive rib on the nose present on the black pencils, with the earlier 1924 date on them, is missing on the later red one. Note also that the red thin-model Supremacy sports that clip and cap that eventually got Rex sued by Parker in 1929, since there’s a washer clip hidden in that bulky mounting. 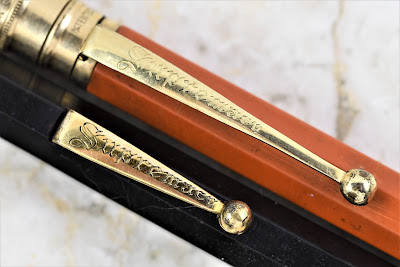 We’ll get back to that in a minute, but the other thing I want you to pay attention to is the caps – the 1924 patent pencils have short caps, while the later ones had more substantial top sections.  In fact, the Supremacy models appear to have been made before the 1924 patent was issued, since neither has that date stamped at the top: 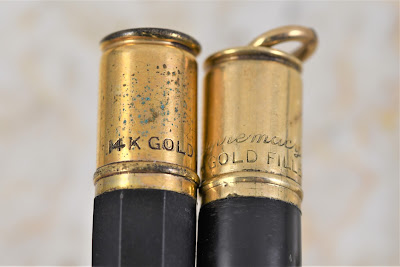 Keep that checklist of characteristics in your head while I show you what I found at the Springfield Extravaganza last fall: 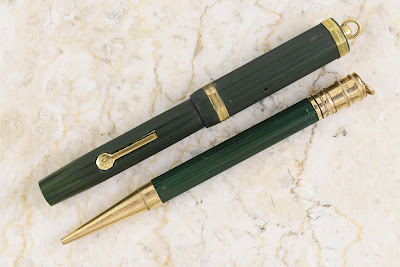 The dealer who had this set keeps a scale at his table on which he measures every bit of gold-plated junk he has and quotes you a generous fraction of his version of  “gold value,” so when he told me 25 dollars for the set I couldn’t pull the money out fast enough before he changed his mind.   This set is something special – I’ve never seen that color on ANY Rex product, ranking Supremacy right up there with John Holland as the only two companies who have merited special colors.

The pen, were it not be accompanied by the pencil, might be hard to peg.  The nib is nondescript: 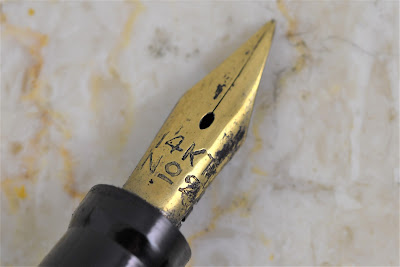 But the lever does have that distinctive old English S: 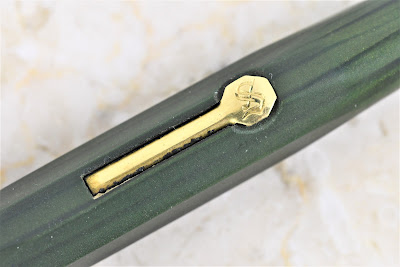 There’s also some nice detail on the bands on the cap, and the faceting on the barrel and cap end with some really nice patterns, too: 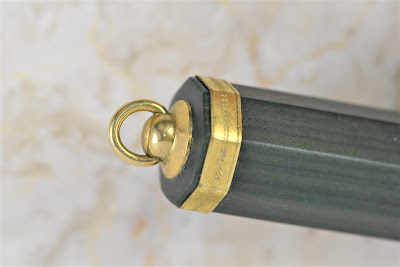 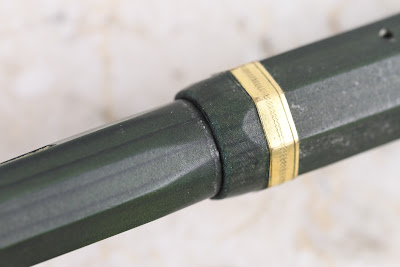 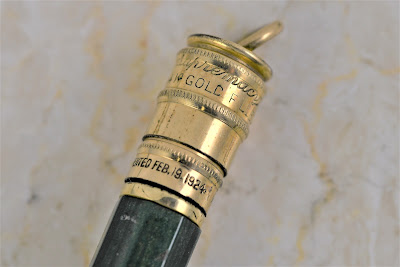 And it’s a McNary patent, but notice that it has the later, more substantial top and while the rib on the nose has been eliminated, there’s a ring of dimples.  Looks like this is a transitional set, somewhere between 1924 and 1925, exhibiting evolutionary steps in between the earlier models and the “four horsemen” era – and in a color I haven’t seen anywhere else.

And speaking of things I haven’t seen anywhere else, check this one out: 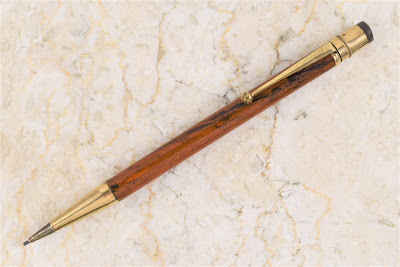 Without an imprint, it took a minute for this one to register with me what it was.  Until it came along, I was only aware of one other example like it: 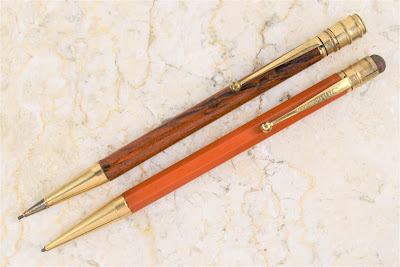 It’s another slim model, “four horseman”-era Rex pencil.  Since the only other one I’ve found was marked Supremacy, that would be my first guess . . . except this one isn’t marked on the clip, as all other clip-model Supremacy pencils I have are.  As shown, the Supremacy cap is a perfect fit, in case you harbored doubts whether this was the same pencil.  Note also that the mystery pencil has the two-stage tip.

Many Rex models were marked on the cap only, including John Holland and Pick.  Finding another slim model cap will be a challenge, and if I do it will likely be attached to something I wouldn’t want to part out.
Posted by Jon Veley at 3:45 AM