This was one of those poorly listed, poorly photographed and poorly described items I won in an auction, at a price so low that if it turned out to be nothing, I was out only slightly more than nothing: 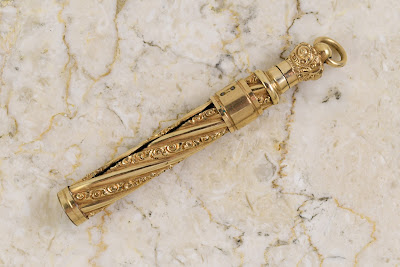 My first thought was that it might be an Edward Todd combination dip pen and pencil, of the sort patented on December 19, 1871 by Joseph Moneghan and Thomas Flynn: 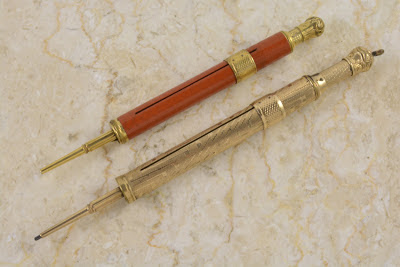 These examples appeared in an article I posted here a couple years ago (see https://leadheadpencils.blogspot.com/2018/03/with-couple-twists.html), and they also came in a style almost identical to this new example: 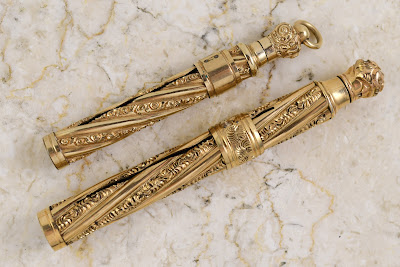 I know, I know. . . the pattern is likely generic, so it’s impossible to identify the maker without an imprint.  Unfortunately, the new one has no such imprint.  And it doesn’t work anything like an 1871 patent Edward Todd. 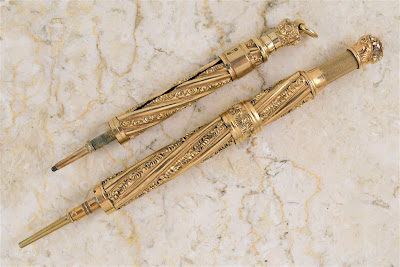 This new one, though, doesn’t pull out at all - I can’t get it to budge and I don’t think it’s stuck.  Twisting the top advances the mechanism into position, which  makes for a very short pencil.  The extender can’t pull out at all, so dip pen writing is no better.  Since the new example doesn’t sport a manufacturer’s imprint, so I was hoping the nib might provide a clue.  I know . . . the nibs are a highly unreliable indicator, as easy as they are to pull out and replace, but fingers crossed it might say Edward Todd . . . 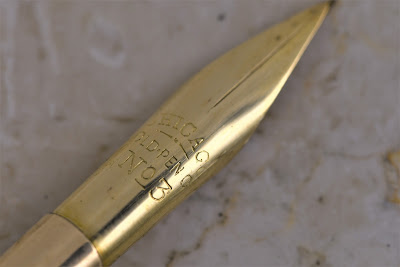 It doesn’t.  “Chicago Gold Pen Co. Chicago.”  Still pretty interesting, since most dip pen nibs like these hail from New York.  L. Michael Fultz gave his pen company the same name in later years, but this was the original - about which Fultz doubtless knew more than I do, but here’s my best shot.

The 1866 Directory and Shipper’s Guide of Kansas and Nebraska showed gold pen companies at both 123 Lake and 128 Lake, with The Chicago Gold Pen Company, Goodfellow & Trauger, located at 123 Lake:

The address might be a typo - according to the Business Directory of Chicago for the following year, Chicago Gold Pen was actually at 128 Lake, upstairs – along with the rest of the entire Chicago penmaking community: 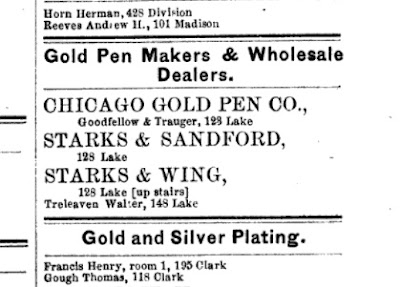 In 1867, Chicago Gold Pen also appears in the Edwards' Annual Director to the Inhabitants, Institutions, Incorporated Companies, Manufacturing Establishments, Business, Business Firms, etc., etc., in the City of Chicago for 1867 . . . whew . . . how’s that for a title?  Seriously, that’s what it was called: 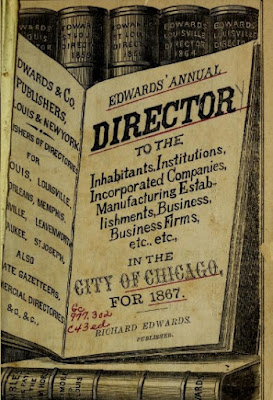 The company appears under Gold Pen Repairing and Gold Pens and Cases, Wholesale in an upstairs room at 123 Lake: 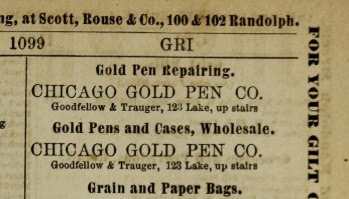 Fortunately, the Edwards . . . yada yada yada directory also has a listing for the Goodfellow & Trauger partnership, providing the full names of the principals: Isaiah Goodfellow and Frank P. Trauger:

This might have been the “Chicago Gold Pen Company” that turned out the nib on my new combo, and outside of these directory listings there isn’t much other evidence that Goodfellow and Trauger remained in business for any significant length of time.  Since relatively more modern examples of conventional fountain pens have surfaced, complete with nibs with breather holes marked with the same name, I figured there must have been some version of the company which operated later.  What I’ve found is that there were two and possibly three different companies using the same or very similar names.

The earliest mention I could find of a business holding itself out as “Chicago Gold Pen” was an advertisement in the Chicago Tribune on November 22, 1858, in which J. Higgins opened his “Chicago Gold Pen Shop” at 31 Lasalle Street: 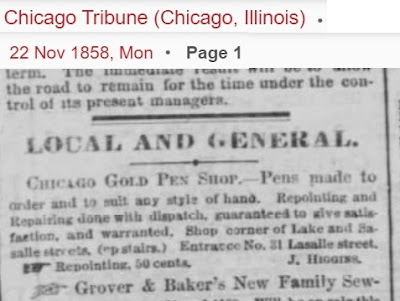 Walter Treleaven opened his “Chicago Gold Pen Manufactory” on Lake Street around 1862; although this advertisement on April 26, 1862 doesn’t announce the opening, it was the earliest I found: 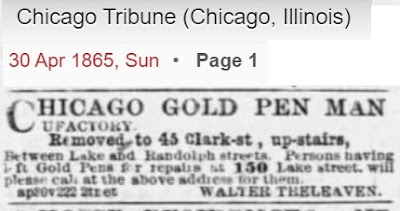 Meanwhile, Giles, Brother & Co. had opened a jewelry store on Lake Street, and by 1865 that firm as claiming to be 'Manufacturer for the trade of the “Chicago Commercial Gold Pen'” (last line of this ad): 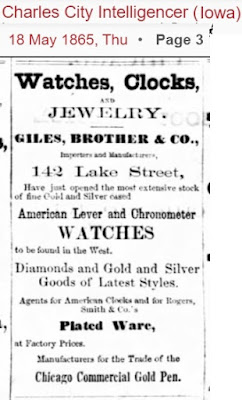 Treleaven remained in the gold pen business for many years, but he had dropped the name “Chicago Gold Pen Manufactory” by 1876: 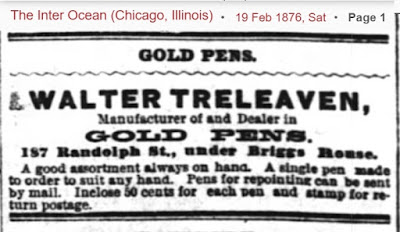 Meanwhile, Aikin, Lambert & Co. was becoming more established in the Chicago area, moving to a prominent location on West Washington Street in 1871.  Note how this announcement in the Chicago Tribune on December 10, 1871 contains back-to-back advertisements for the firm, and it is either “Aikin” or “Aiken” depending on which ad you read: 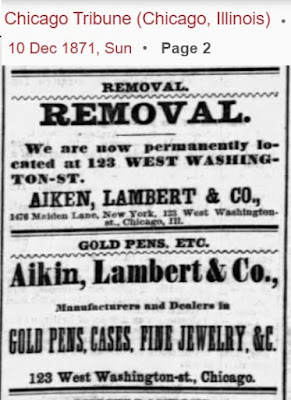 On July 12, 1883, the Chicago Tribune announced the formation of a “new” corporation, The Chicago Gold Pen Manufacturing Company.   The incorporators, in addition to a Samuel F. Estell, were James C. “Aitken” and Henry A. Lambert.

I’m pretty certain this was yet another misspelling for James C. Aikin, and those later pens sporting the “Chicago Gold Pen” name were Aikin Lambert pens made and distributed through the company’s western operations.  So is my little combo sporting an Aikin Lambert nib marked with the name of the company's western subsidiary?  Maybe...

But then there’s this curious footnote, in the Norfolk Virginian on November 18, 1892.  Local jeweler R.L. Hyman of the local jewelry store “The Diamond Palace” announced that he had been made the southern agent for the “Chicago Gold Pen and Pencil Company, one of the largest and finest manufacturers in the United States.” 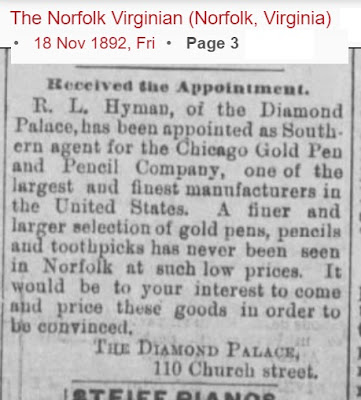 Largest, finest and most invisible apparently.  I’m assuming that Hyman cared enough about his appointment to get the name right of the company appointing him, but I can’t find any other reference to a “Chicago Gold Pen and Pencil Company.”

Another Well Documented Article... I’ve seen pens like this on eBay, but have been hesitant to make a purchase since they often have no manufacturers markings!

Thank you! Note though that I've stopped short of saying that the holder this nib is in was made or even produced by Chicago Gold Pen Co. - the holder could have come from anywhere, but it did provide a great opportunity to research the firm.