So I Wouldn't Bug Nishimura Again

A few years ago at the DC Show, I bought a collection of pencils from a guy on the first day and spent most of the show at my table – a rarity for me – largely ignoring customers as I sat there opening up totes like there might be a Red Ryder bb gun with a compass in the stock and this thing that tells time lurking in there somewhere.  There was a lot of great stuff in that bunch, much of which filled out missing colors and sizes of models I knew about.  I’m an archivist and librarian more than a collector. 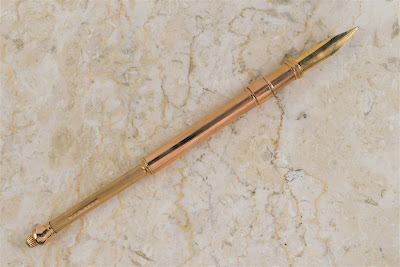 There were a couple reasons I haven’t told you about this one before.  Reason Number 1: since this is a pencil blog, I’d want to show you the pencil part and I can’t.  A broken solder weld at the front end, coupled with a gunked up inside I haven’t been able to free up, means I can’t even post it as a decent display piece: 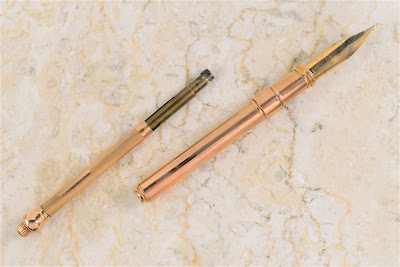 It wasn’t anything I’d put in the parts bins.  The nib is a gorgeous Number 6 sized Fairchild: 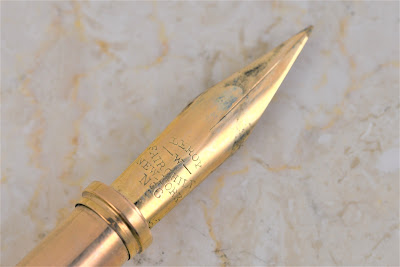 And the real reason I kept it around was the imprint on the extender: 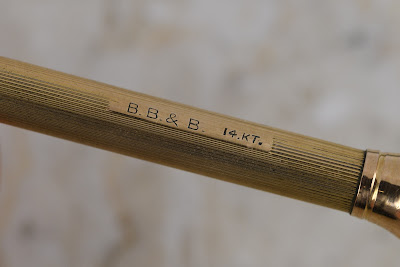 “BB&B” followed by 14k.  Which brings me to Reason Number Two this one hasn’t been featured here . . . I asked David Nishimura what “BB&B” stands for, he told me, and I forgot.  I asked him again, he reminded me again, and I forgot again.

Rinse and repeat.  I’d asked him so many times what this stood for that I felt too sheepish to call, even if I had a Sharpie in one hand ready for him to write it on my forehead.  Fortunately, at a pen show a couple years ago – I think it was Chicago – one of my friends (whoever it was, remind me so I can include you!)  had another example of the breed. 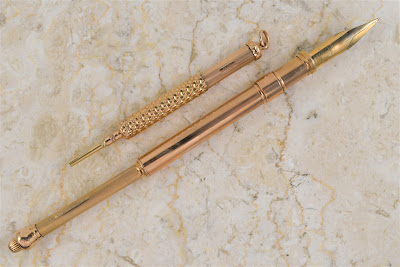 Just like the first one, it’s 14k and also in “rose gold” – that pinkish gold that is alloyed with copper to give it that unique color.  I hate buying gold, and I had to pay every cent the metal in this one was worth, but I’ll do it when the occasion calls for it.  And when the piece means I don’t have to phone a friend for the answer (for the umpteenth time), the occasion called for it. 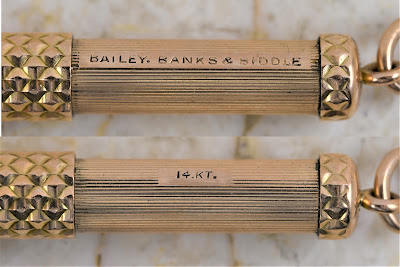 Bailey, Banks & Biddle.  There are modern accounts of this Philadelphia jeweler’s firm out there, but preferring as I do to get information from more direct sources, I rooted around and found an account of the firm’s early history, published in the Harrisburg Daily Independent on the occasion of BB&B’s grand opening of a new store in Philadelphia in 1904: 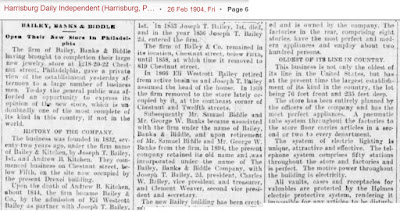 According to this account, Joseph T. Bailey and Andrew B. Kitchen formed Bailey & Kitchen in 1832, which was renamed Bailey & Co. when Kitchen died in 1844.  After the substitution of various partners over the years, Joseph T. Bailey (the second, son of the original Bailey) affiliated with George W. Banks and Samuel Biddle.  Announcement of the new firm’s name, Bailey, Banks and Biddle, appeared in the Philadelphia Inquirer on March 2, 1878: 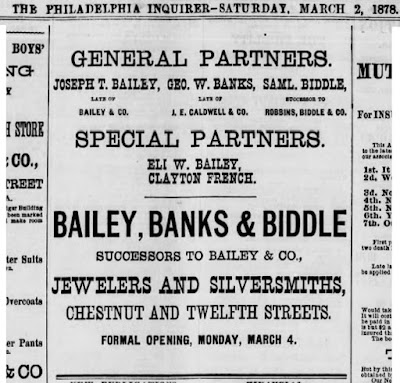 A more formal piece followed in May, after the partners got settled into handsome new quarters at Twelfth and Chestnut in downtown Philadelphia: 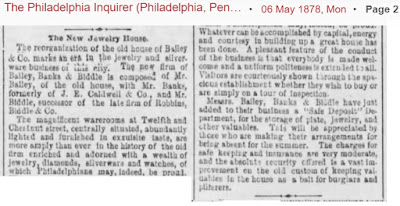 According to both of these announcements, Banks had been affiliated with J.E. Caldwell, another firm profiled here a while back (see https://leadheadpencils.blogspot.com/2017/07/j-e-caldwell-co.html).  While I didn’t run across Banks’ name in the course of that last article, note that the pencil featured in that article, just like these two, was rendered in that unusual rose gold: 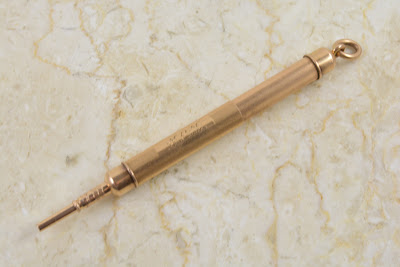 That Caldwell sports a commemorative inscription from 1899, and I think that’s about right for my BB&B pieces, too.  After Banks and Biddle retired, the company was formally organized as a corporation in 1894, styled The Bailey, Banks and Biddle Company.  The earliest mention I found in advertisements offered by the firm was this one, from 1890: 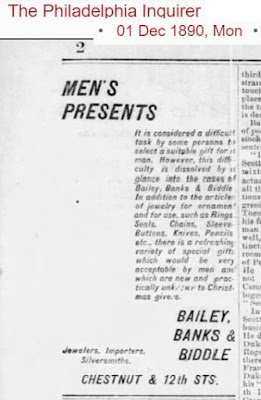 There’s another mention of pencils in 1892 – but in silver, another flavor to keep an eye out for. 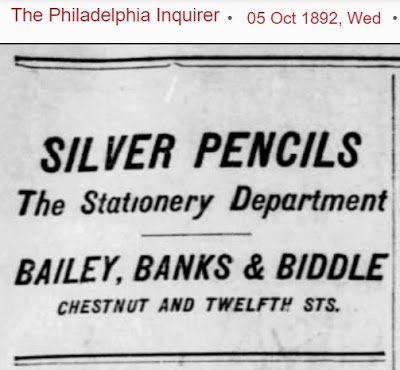 Bailey, Banks & Biddle is still in business, if only in name.  In 2007 (the company's 175th anniversary) there were 70 stores in the chain when it was purchased by Finlay for $200 million, but by the beginning of 2019 only 3 locations remained.  In August, 2019, two of those three were also closed, leaving only one location in Houston, Texas.  In November, the company (BBB Group) filed a Chapter 11 Bankruptcy, listing assets of less than $50,000.00 and a string of unpaid vendors and suppliers (Case number 19-36260, U.S. Bankruptcy Court, Southern District of Texas).  As I write this, it is uncertain whether anything will be left of the firm when the case is over.
Posted by Jon Veley at 3:45 AM

I walked by that store at 1218 Chestnut Street in Philadelphia many times, when I worked for Price Waterhouse in the late 1960's and early 1970's, at 6th and Market Streets. It was across the intersection from Wanamakers, in a very prestigious section of town.

My parents had a Bailey, Banks & Biddle clock.