A Tantalizing Lead for Waterman Historians

This article has been edited and included in The Leadhead's Pencil Blog Volume 4; copies are available print on demand through Amazon here, and I offer an ebook version in pdf format at the Legendary Lead Company here.
If you don't want the book but you enjoy this article, please consider supporting the Blog project here.
As I prepare to fire things up here in the next couple weeks, I’ve stumbled into something that might be nothing . . . but it might also be something fairly important to students of the early history of the L.E. Waterman Company.  Since there have been several articles written by people who have researched this early history heavily, I thought it would be best to lob this one out there and see what others think.  It involves this pair of magic pencils, which I’ve been meaning to write about for some time: 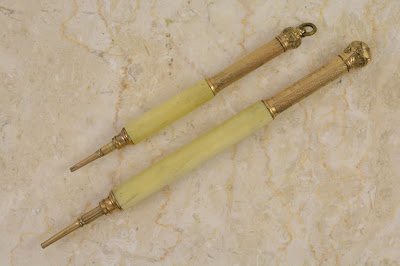 The only thing about these which is unconventional is the unusual name they share, imprinted on the extenders: Ray Mfg. Co.: 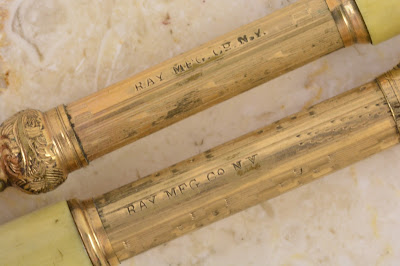 I’ve only been able to learn a few details about the Ray Manufacturing Company, but the few that I have found are fascinating.  The earliest reference to the company is from 1874, when a young Frank T. Pearce left his job at Richard Cross & Sons (before the latter was known as A.T. Cross, after Richard’s son Alonzo) to become Ray’s western sales representative.  According to Pearce’s obituary, Pearce worked for Ray until 1880, when he started his own firm, originally as a partnership under the name of Pearce & Hoagland: 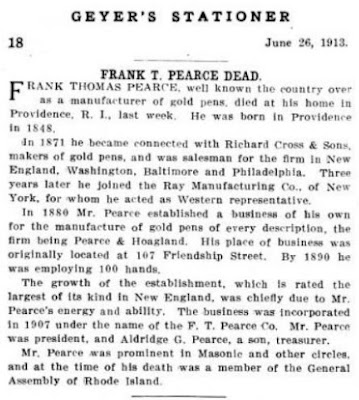 But then there’s this: a small narrative in the August, 1884 edition of The Jewelers’ Circular and Horological Review, which shows the Ray Manufacturing Company’s addresses at 94 and 96 Nassau Street, as well as 129, 131 and 133 Fulton Street, New York:

Hmmm.... the Fulton Street address, right across the street from a cigar store at 136 Fulton, might provide an interesting new detail in the L.E. Waterman story.  Those who have been read The Pennant will recall a series of articles written by Daniel Kirchheimer and George Rimakis, “Blotting Out the Truth,” in which they established that a man named Frank Holland, from Manchester, Connecticut, abruptly set up shop in a corner of that cigar store in 1883 to sell his new Holland Automatic fountain pens.   Frank Holland then abandoned the enterprise just as abruptly, leaving behind his salesman, Lewis Edson Waterman, to tinker with Holland pens and come up with what would become the Waterman feed.

Holland’s choice of location doesn’t seem nearly so random when one considers that it was directly across the street from a manufacturer of hard rubber tubing.and gold pens.  And if Waterman, left in a lurch, needed hard rubber tubing in a hurry imprinted with his name rather than Holland’s, where better to find these parts than a place just a few yards from his front window, which supplied hard rubber parts “drawn to order at short notice”?

It’s an intriguing possibility – especially since Ray appears nowhere in New York Directories of the time.

My friend George Kovalenko posted an article over on his blog, fountainpenhistory.blogspot.com, in which he indicates that Waterman placed an order for his new feeds with a man named Herbert Fisher – but Fisher promptly turned around and applied for a patent for the new feed in his own name, causing years of patent complications that wouldn’t be resolved in Waterman’s favor for many years (George’s article was posted at http://fountainpenhistory.blogspot.com/2016/03/watermans-v-shipmans.html).   Would Waterman have placed subsequent orders with Fisher after this treachery?

There’s more . . . maybe.  It comes in the form of the Ray Manufacturing Company’s obituary:

According to this reference, the Ray Manufacturing Company was dissolved in 1888.

The year 1888 is equally important in L.E. Waterman’s history.  Waterman’s former partner, the stationer Asa Simpson, had a mortgage interest in Waterman’s patents, and in April and May, 1888 he began making a competing pen using Waterman patents -- only to die later that year.  Waterman, for his part, founds the L.E. Waterman Company.

Ray disappears – and the L.E. Waterman Company is making its own pens – in 1888.  Was Ray simply dismantled into oblivion?  Or did a new owner of its equipment simply pick up where it left off?
Posted by Jon Veley at 4:07 AM 1 comment: