A Tale of Two Clips

In an inconspicuous bunch of pencils in an online auction, this guy could be seen peeking out between two nondescript bits of flea market fare: 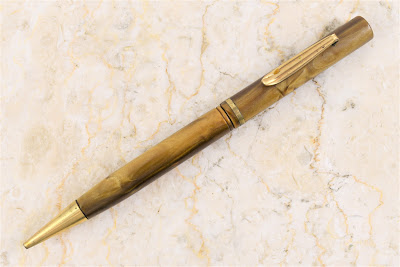 I was hoping when it arrived that it would clean up nicely and that it would have an imprint for LeBoeuf on it somewhere . . . and one out of two isn’t bad.  That plastic just screams LeBoeuf, which was known for attractive celluloids with spectacular depth of color.  And yet, that clip . . . I just couldn’t remember that clip being used by the company, and there was no marking on the pencil anywhere.

So I posted a quick note on Facebook and received confirmation that yes, this is a later LeBoeuf – I had a desk pen some years ago that was also unmarked, except for the P on the nib for the company’s flagship line of pens, the “Pilgrim.”   At the DC show which followed, one of my pushers (reinde me who you are!) added a bit to my unmarked, later LeBoeuf fold with a grey ringtop: 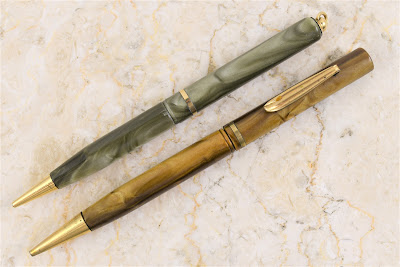 If your initial reaction when you saw that clip was Eisenstadt, you’re in good company.  That’s certainly where the inspiration came from – I showed off an Eisenstadt pencil made by the Rex Manufacturing Company here at the blog very early on (The Leadhead's Pencil Blog Volume 1, page 68): 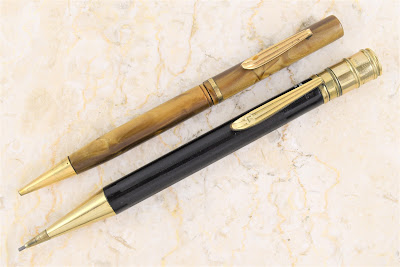 Of course, the clip mountings are totally different, since this uses Rex’s patented clip.  For a better example, I do have one of the company’s pens, with their distinctive “backwards” levers (the tab of the lever faces towards the nib rather than the top of the pen): 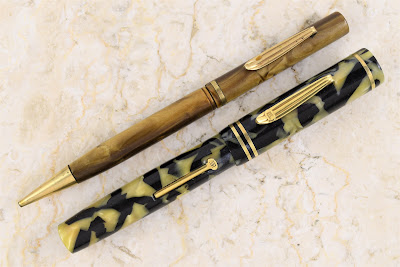 OK, I’m showing off a little with that black and pearl Eisenstadt.  Most are black hard rubber, and these are really tough to find – but this is a pencil blog, right?

Note that Eisenstadt clips, in addition to being longer and more substantial, have the company’s logo of an E nestled within a carpenter’s square at the bottom.  However, the exact clip found on my LeBoeuf has an exact counterpart elsewhere in pencildom: 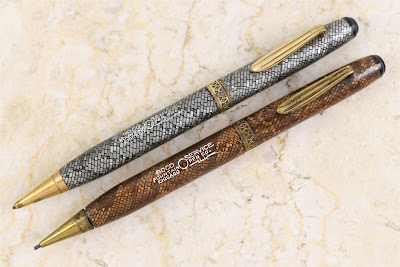 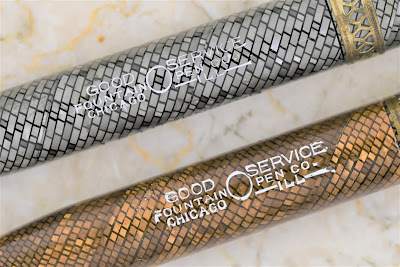 Good Service was a brand name used by Sears Roebuck & Co. on its lower quality pens and pencils – a step below the higher quality Diamond Medal and medium quality Webster brands.  In The Catalogue on page 82, I had suggested these were turned out by National Pen Products, which has widely been regarded as an error - Parker Pen Company was the likely manufacturer, (with, of course, Cross supplying the innards).  Of course, mixing and matching bits and pieces was a hallmark of National, and these have a little bit of everything in them: Parker's outsourced innards from Cross, celluloid reminiscent of that patented by Seth Crocker, a center band that looks more than a little like what is found on some Moores . . . 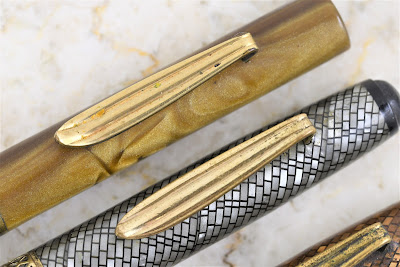 and clips from a late-model LeBoeuf.  Richard Binder’s Glossopedia reports that LeBoeuf filed for bankruptcy in 1933, and the LeBoeuf-Pilgrim Pen Company, Inc. came later.  Which came first?  I’m sure there will be a follow up article when I figure that out.

The Good Service pencils are undoubtedly a Parker product. There is plenty of evidence to support this, including original advertisements (these pens/pencils are called the Golden Jubilee model, btw) and originals in the Parker Archives. Reference Paul’s Fountain Pen Journal Volume 1 Issue 3 for a write up on them. They were made in 1936 for Sears’s 50th Anniversary.

Thanks Matt and Brian, I'll check that stuff out!