If I talked less, people would listen more. It’s like that time Janet said I never listen to a word she says, and I responded (unwisely) “Yes I do!  There’s just too damned many of them!”

I still think that was funny, by the way.  She never has.

People listen more to men of fewer words – people like David Nishimura, who has collected and researched writing instruments for decades.   When David posts an article every so often, you know it’s well thought out, you know it’s right and you know it’s going to be important – at least, to the extent any of this stuff is “important.”

Similarly, when David gives me a call late at night, I know it isn’t just to chat – he’s got something to say.  A few weeks ago, I received just such a call.  “You know those torpedo pencils?” David asked: 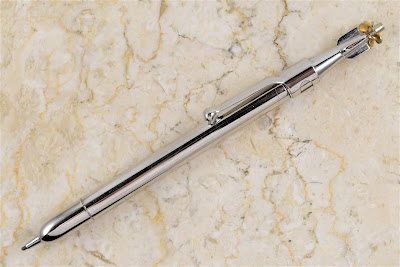 Why yes, yes I do, I said.  Buying one of these was inevitable for me, just because they are really neat, but it took me a while to find one that suited me: since these sit at the intersection of collectible pencils and collectible militariana, the prices on them are usually a lot higher than I could swallow.  When this one found its way to me, it was in a larger collection I had purchased and it made its way straight to the wall o’ pencils.

“I thought they were made by Cross,” I replied.  These pencils are entirely unmarked, so that was just an unsubstantiated inkling, one of those nagging things I thought I might have heard somewhere from a reputable source.  So reputable, in fact, that this example has resided alongside my Cross pencils for years.

It was, David explained, his best guess a few years earlier.  Once he suggested it, people picked up the idea and ran with it, so what started as an offhand (but well considered) hypothesis has accumulated the gravitas of wisdom.

David was calling me to let me know there was a current auction listing that proved his hunch wrong.  He said he thought I should buy it and write about it, and after the auction was over I reported that there was a torpedo heading my way in more ways than one (if the wife found out how much this one cost me): 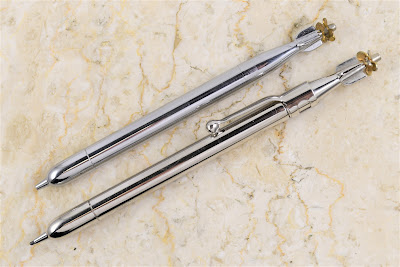 This new one doesn’t have a clip, which given its slightly smaller size is probably intentional.  Oh, and by the way, these come in two sizes.  Like the example I already had, this one is also completely unmarked – the box in which it came, however, is another story.  Indulge me in a fiction as I show this to you: pretend I don’t talk so much, emerging once in a blue moon like some Bobby Fischer of pencils, so that what I’m showing you has all the gravitas of a Nishimura pronouncement: 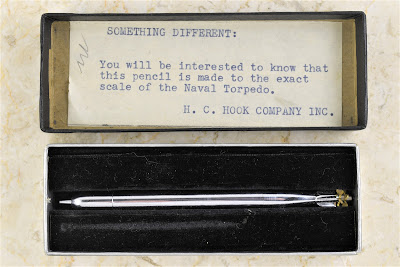 You will be interested to know that this pencil is made to the exact scale of the Naval Torpedo.

What you see is all there is.  There’s no markings on the outside of the box and no instructions underneath the flocked cardboard insert, just this short message glued inside the lid.  That, however, is enough to convince both David and me that the producer of these torpedo pencils was the H.C. Hook Company, Inc., and not Cross.

What I have been able to learn about the company is consistent with this conclusion.  On June 19, 1944, Steel: The Magazine of Metalworking and Metalproducing reported that Henry C. Hook had formed the company along with John Lindegren as a tool and gage engineering service in Worcester, Massachusetts.  The firm was moved to Auburn, Massachusetts shortly after it was established:

There are some discrepancies in when H.C. Hook was founded – another source indicates 1946, and Henry’s daughter Olive, according to her obituary, “For 30 years, she was vice president and treasurer of H.C. Hook Co. in Auburn, Mass., a company founded by her father in 1953. She retired in 1982.”

From the outset, the H.C. Hook Company had strong ties to the United States Navy.  Henry’s daughter Olive was a Wave in the Navy’s medical corps, enlisting in 1943 and serving through the end of World War II.

Henry Hook died on March 23, 1965 at the age of 80, and his death was reported both in the northeast as well as in Fort Lauderdale, where he was a winter resident, suggesting he had retired. 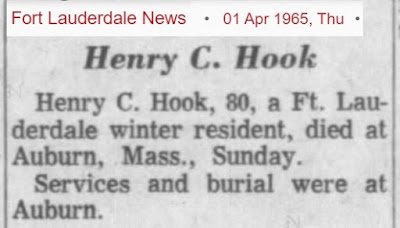 Hook had sold the company to Carl A. Hagberg, another World War II Navy Veteran who, according to Hagberg’s obituary, worked at Norton Company in Worchester for “several years” before working at and owning the H.C. Hook Company until his retirement.  Hagberg died on February 25, 2014 at the age of 88.

After Hagberg retired, the firm was sold again, to Robert Marshalkowski, Jr., whose obituary states that he bought H.C. Hook in 2003 and was its president until 2009.

The Hook and Hagberg family’s connections with the Navy fit nicely into the story of these torpedo pencils, and the pencils are new enough that there are other supporting personal anecdotes along these lines.  After Kiwi Dave blogged about one over at Dave’s Mechanical Pencils, two people posted comments that they had purchased examples new from Navy PX stores, one at the New London Sub Base in New London, Connecticut during the 1950s, and the other “at the gee dunk store in Camp Berry, Great Lakes Naval Training Center in late June of 1958.”

A online auction description preserved at Worthpoint includes a story in which the author claimed his father was a machinist aboard the USS Nereus, a Submarine Tender, who claimed that machinists on board the tender later made these pencils.

Hook clearly had the capacity to make the barrels, and the company’s strong ties to the United States Navy positioned it well to supply on-base stores with souvenir pencils shaped like torpedos.  However, I don’t think David Nishimura’s initial theory that Cross made the pencils is completely dispelled.

Making pencil shells is one thing, but making the mechanisms is a specialized art.  It wouldn’t make sense for H.C. Hook to gear up production to  manufacture robust pencil mechanisms just to knock out a few souvenirs.  It is likely the company would source mechanisms from someone close by – and the firm’s operations in Auburn, Massachusetts are conveniently located near Cross in Providence, Rhode Island.

The action has a very Cross Century-like feel to it, which was what led David Nishimura to make that guess in the first place.  I still believe David is probably right that Cross made the insides of these things; now, however, we finally know who made the outsides and marketed them.

Another mystery solved. Wonderful reading. Having a few of these go through my hands for just a few dollars makes me wish I still had one but soon the flea mkts. will open and I will find another..