One I Thought I Told You About

As I was writing the article that posts tomorrow, I went to refer back to an article I was sure I had posted a long time ago - and after I couldn’t find it, I checked my unpublished pictures folder and sure enough, there it was: 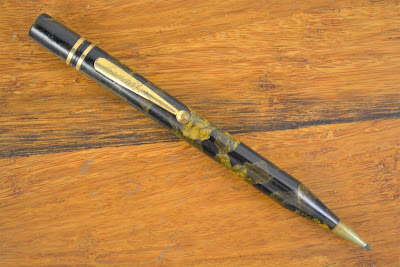 Taken in 2015, during my “dark bamboo flooring” era.  Pictures are still serviceable, but if I hear too much griping I’ll reshoot them.  This is a higher quality pencil in a black and bronze celluloid, and if I had to guess who made it, I’d say it probably wasn’t the name on the clip:  “Ernall.” 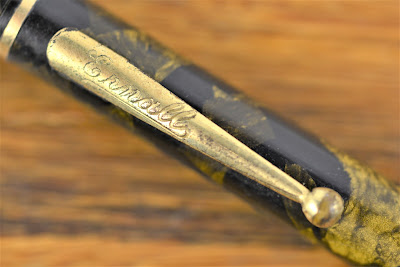 If I had to guess, I’d say Conklin built this pencil - the celluloid is one Conklin used, and that flat top with two bands is very reminiscent of an Endura.  I’m sure I’ve meant to post about this one a couple of times over the years – in 2015, the similarity to a Conklin would have been about the only observation I would have been able to offer, so I probably had it sitting on the shelf waiting for more information.

More information came in 2017, when I wrote American Writing Instrument Trademarks 1870-1953.  In the course of researching that book, I ran across the trademark registration for the Ernall mark found on this clip: 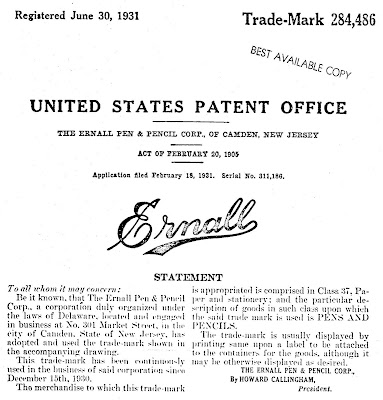 These registration certificates are a gold mine for researchers, and this one is no exception.  The Ernall Pen & Pencil Corporation was located at 301 Market Street, Camden, New Jersey; its president was Howard Callingham; and the company first used the mark found on the clip of my Ernall pencil on December 15, 1930.

I think the reason this one didn’t make Leadhead’s headlines was because this information, while a huge leap forward from what I knew before (which was nothing), still proved unsatisfying.  I was able to find notice of the incorporation of The Ernall Pen and Pencil Corporation, which appeared in The Wilmington, Delaware Morning News on December 27, 1930: 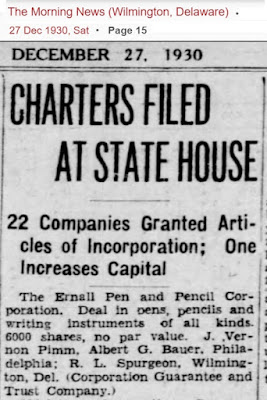 The short announcement identifies J. Vernon Pimm, Albert G. Bauer and R. L. Spurgeon as the incorporators, referencing a “Corporation Guarantee and Trust Company.”  Pimm, Bauer and Spurgeon weren’t pen and pencil men – they were professional corporate front men, under whose names companies would be founded by the real stakeholders – who, for whatever reason, preferred to remain anonymous.  Here are those same three men, forming “The United Liquor Stores Corporation of America” in 1933: 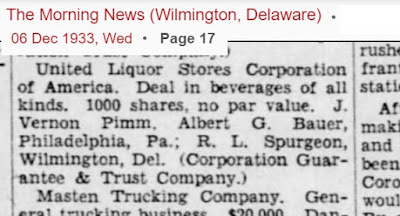 And two of the three of them were in Ohio a few years later, forming the Cambria-Webb Coal Mining Company in Toledo in 1937: 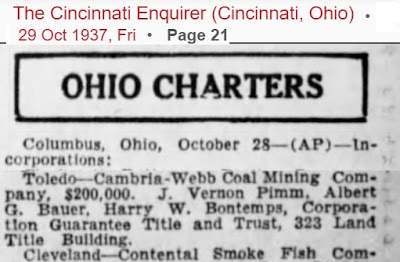 Theirs was a national operation.  The Illinois Secretary of State reports that Pimm, with a business address of 325 Land Title Building, Philadelphia, was an officer in both the Corporation Organization Company and the Corporation Guarantee & Trust Company, both corporations having offices in Chicago: 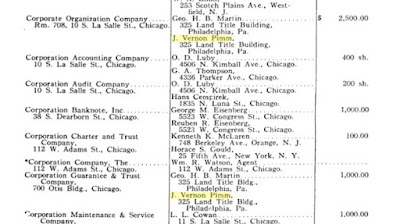 So what of Howard Callingham, the President of Ernall Pen & Pencil?  Unfortunately, it doesn’t look like he was a pen and pencil man, either.  In 1920, he was listed in The Accountant’s Directory and Who’s Who, leading the accounting firm of Callingham, Howard & Co. across the river from Camden in Philadelphia:

Callingham died just ten years after Ernall was incorporated, and while his short obituary mentions his careers as an accountant as well as being a flutist in the Philadelphia Orchestra, there’s no mention of his diversion into writing instruments: 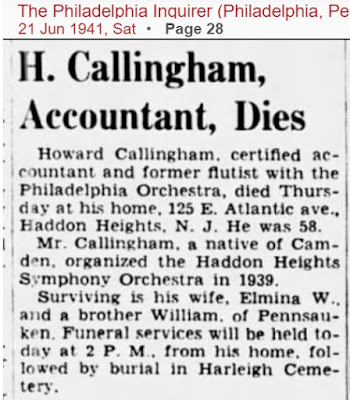 There’s one other clue: on July 26, 1931, a sales manual for the company was copyrighted by a man named William M. Harcourt.

But that too appears to be a dead end: the only newspaper reports I can find for a “William M. Harcourt” is for a freelance writer, a Baltimore native who died in Brooklyn New York in 1935.  Apparently, Ernall’s sales manual was ghost written.

Was Ernall the name of some long forgotten stationer or salesman?  I haven’t found anyone.  Was it a place, or maybe one of those cute contractions, say of “Earn all”?  Dunno.  Whatever Ernall Pen and Pencil Corporation was, the men behind it didn’t want to be known.

Email ThisBlogThis!Share to TwitterShare to FacebookShare to Pinterest
Labels: Ernall