My Sheaffer collection is mostly the result of fishing with hand grenades.  Sometimes I have deliberately targeted a Sheaffer specifically to add to my collection, but most of what I have came from box lots, purchased collections and such.  Sheaffers are diverted from the stream of incoming stuff, and compared to what I’ve got – any differences, no matter how small, and here they stay.  Duplicates are strictly catch and release.

Today’s subject is just such an example.  A lot of two dozen or so relatively interesting things showed up in an auction, and I’d noticed a Sheaffer in there that I knew I’d be comparing to the Sheaffer Balances I had on hand: 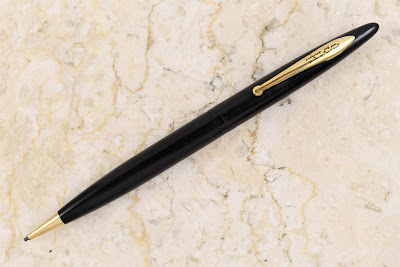 When it arrived just a couple days ago, diverted it was to the Sheaffer corner, where I noticed something: 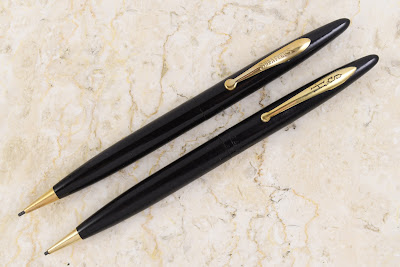 The other bandless Sheaffer Balance pencils I have sport flat ball clips like this (earlier models still have the round ball clips).  This new example has a “rigid radius” clip, introduced in 1935, and every single example of that line in my collection has a band: 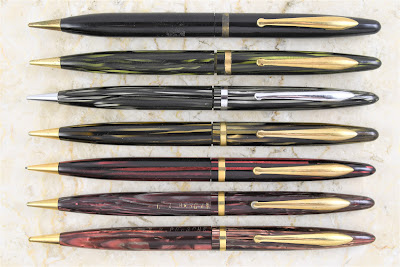 I haven’t been turning my nose up at bandless rigid radius clip Balance pencils; I just haven’t run across any . . . and with as many hand grenades have sent hoards of pencils floating my way over the years, that probably says something.  I checked the catalogs in the PCA’s library, and all the rigid radius clip models had bands.  Bandless models from 1935 and later were a lower-priced line, paired with the earlier flat ball clips on the Junior line, through and including Sheaffer’s 1941 catalog.

So was this a factory error?  No, this was no mistake.  There was a very specific reason why the band was omitted from this one: it would have been in the way. 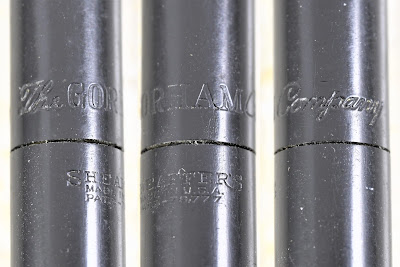 “The GORHAM Company,” is prominently imprinted where that band would otherwise have been, and there are traces of gold flake still visible in the letters.   This was a very special edition made for Gorham, the prominent silvermaker (and producer of some nice Victorian figural pencils, too – see The Leadhead’s Pencil Blog Vol. 2, page 245).

Initials on that clip are a turn-off for most collectors, but on a pencil like this, made for a special customer’s special occasion, I’m all in.  “S.H.” is likely the initials of a prominent person within the Gorham organization in the 1930s, sometime between 1935 and 1941.  I haven’t (yet) figured out who that was.

The time during which this pencil might have been made is also intriguing.  Gorham had been absorbed by Black, Starr & Frost around 1929, according to my research for an earlier article here (see The Leadhead’s Pencil Blog Volume 3, page 227-228), but as I scoured newspapers looking for someone connected with Gorham with the initials S.H., I noticed that advertisements simply identified it as “The Gorham Company” through 1938.  If the transfer happened in 1929, at least the buyers had the good sense to continue using the name they had paid for.

And the Gorham/Sheaffer connection has an interesting twist: both were later acquired by Textron.  That, I truly believe, is a coincidence (and that is rare for me).
Posted by Jon Veley at 3:45 AM