You might have thought there was something wrong with me, since I’ve been blogging again for almost two months and I haven’t even mentioned the Rex Manufacturing Company yet.  Allow me to reassure you that all is well: 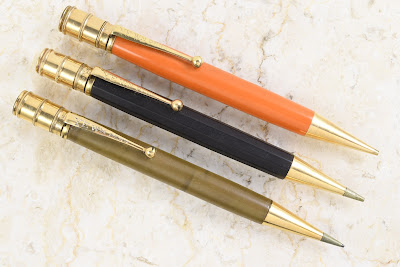 All three of these pencils are marked “Ye Wm Penn” on the clips: 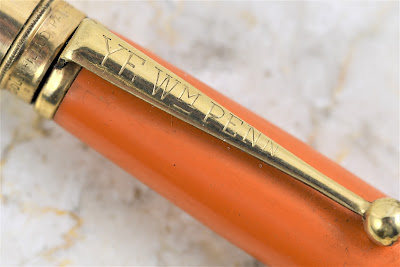 And yes, all three were manufactured by the Rex Manufacturing Company of Providence, Rhode Island, which produced pens and pencils for a wide variety of other pen companies, including John Holland, Pick, National Pen Products (including store brands Webster, Gold Bond and Gold Medal) and probably a dozen more – it’s been a longtime obsession of mine, piecing together the history and trajectory of the biggest pen and pencil company you never heard of!

Two of these three pencils appeared in my last article on this brand – the black one with the unusual faceted barrel has come my way at some point along the line in the last year or two.  The red one has a one piece tip, and bears the earlier McNary patent date of February 19, 1924: 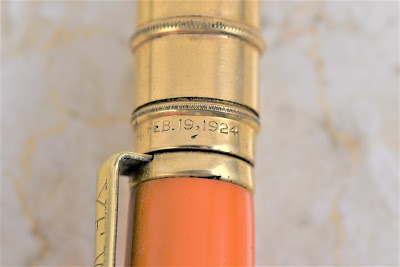 The two black ones both have the two-piece tip associated with later versions of the pencil, and both are  marked August 4, 1925. 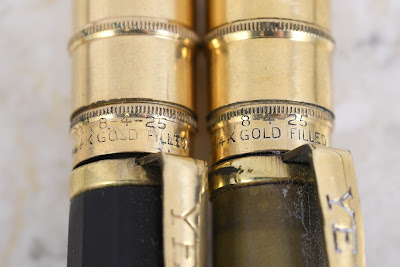 This is one of the four patent dates which are frequently stamped on these pencils at their zenith - I call them the “four horsemen” patents for a bit of dramatic flair, and the full rundown of all four can be found in The Leadhead’s Pencil Blog Volume 2, page 103.

Interestingly, the patent date on these two pencils is for the way the top half of the pencil is put together, not for that two-stage tip you see here.  That was covered by the second of the four horsemen, patent number 1,563,217 issued on November 24, 1925 to Arthur E. Moore: 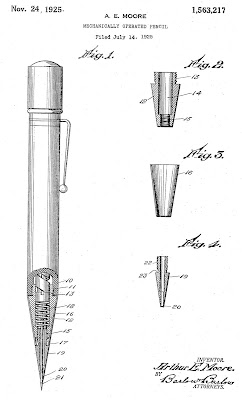 What intrigues me most about these pencils is the name, “Ye Wm Penn.”  It was the only trade name under which Rex marketed its products on its own account, and the challenges I encountered tracking down the trademark inspired me to write American Writing Instrument Trademarks 1870-1953: 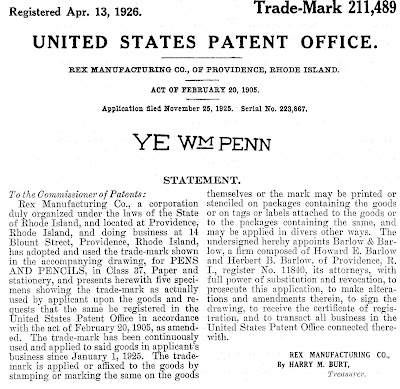 See https://leadheadpencils.blogspot.com/2017/08/the-reason-i-wrote-trademark-book.html for that story – in the end, the trademark registration certificate turned up but didn’t really give me any new information I didn’t already know from previous research. 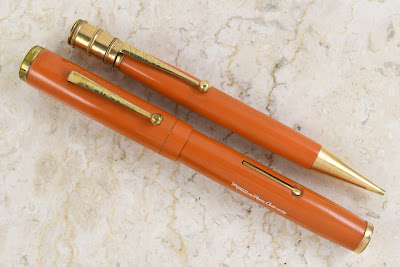 Like the pencils, it has the same trademark on the clip: 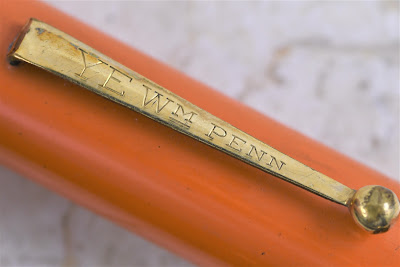 There’s no nib in the pen to show you, but that bit on the barrel gives me just a little more to go on: 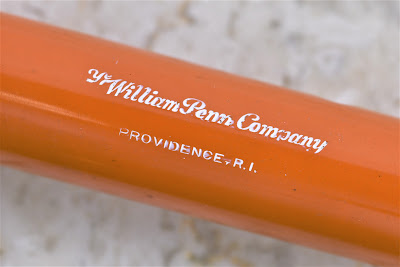 “Ye William Penn Company / Providence, R.I.”  The trademark registration certificate indicates that “Ye Wm Penn” was used on pens as well as pencils, but I was never sure specifically under what name they might have been marketed.

Unfortunately, that extra clue didn’t yield anything else.  There’s no mention in newspapers or anywhere else of a “Ye William Penn Company.”  But fortunately, the dates on which printed materials enter the public domain is up to 1924; next year, 1925 materials will be available – that’s the year in which the trademark registration indicates Rex started using “Ye Wm. Penn” in commerce.
Posted by Jon Veley at 3:45 AM