With a Couple Twists

As Joe Nemecek and I pawed through Ed Fingerman’s stash of Victorian pencils, these two sort of jumped into my hands and refused to leave: 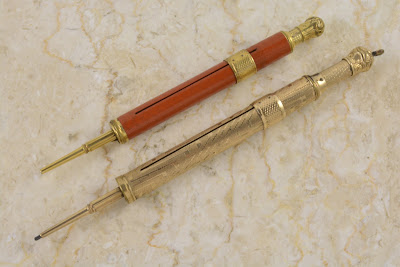 These are both examples of Edward Todd’s typical combination dip pen/pencil, patented by Joseph Monaghan and Thomas Flynn on December 19, 1871, with Flynn assigning his interest to Monaghan: 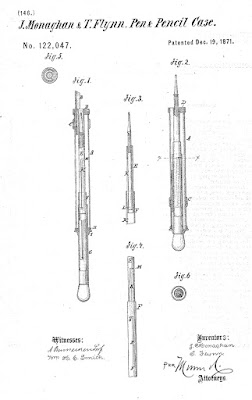 I’ve written about this mechanism a couple of times before here recently, with a black hard rubber example in “Lownds Redux” (https://leadheadpencils.blogspot.com/2016/10/lownds-redux.html) and most recently with an example rendered in 14k in “Packing a Punch” (https://leadheadpencils.blogspot.com/2017/09/packing-punch.html).  But each of these has something which adds a bit more to my collection.

The all-metal example isn’t 14k, but the imprint is a little different from what I’m used to seeing, sort of wrapped around the barrel rather than in straight lines: 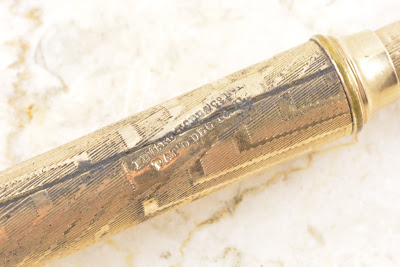 And the nib, in addition to being a nice big number 5, sports Joseph Monaghan’s name: 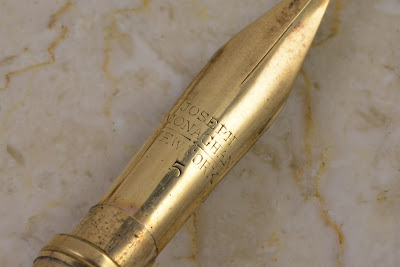 As I had mentioned in “Lownds Redux,” David Moak’s excellent book, Mabie in America, indicates that Edward Todd purchased Kurtz & Monaghan in 1871, renaming it Edward Todd & Co., the same year that the patent for the combo was issued – suggesting that this example might have been one of the earliest ones made under the Edward Todd name.

But this one is not as early as the other example.  I was eager to add it to my collection anyway, since red hard rubber examples of anything Victorian are so much harder to come by.  The nib is an Edward Todd number 3, which might suggest later production (or a later replacement nib): 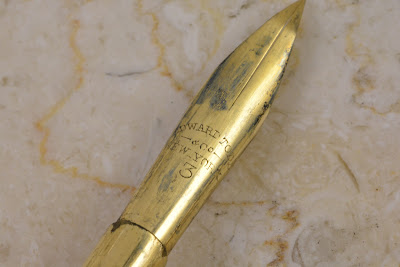 But on closer examination, the imprint was something I had mentioned in “Lownds Redux” . . . something that I had never seen, but would like to: 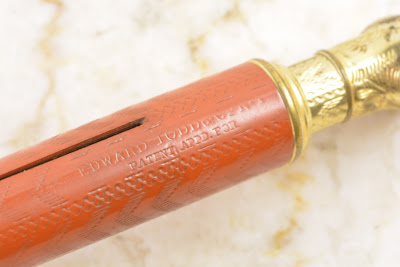 Back in 1871, patents did not include the dates on which inventors applied for their patents, so I found it irresistible to start poking around in an effort to learn with greater certainty when Edward Todd purchased Newton, Kurtz & Co.  In the process, I found some surprising things concerning the genealogy of the New York firms which preceded him.  What developed was a clearer history than I’ve been able to find from any other source . . . one I will share with you starting tomorrow . . .


Note:  direct link to tomorrow's article is https://leadheadpencils.blogspot.com/2018/03/from-bagley-through-todd-part-one.html.
Posted by Jon Veley at 3:45 AM