We've All Had It Wrong

I’ve had occasion to revisit the Supremacy in light of an interesting thin model that turned up recently, shown here alongside its normal-sized counterpart: 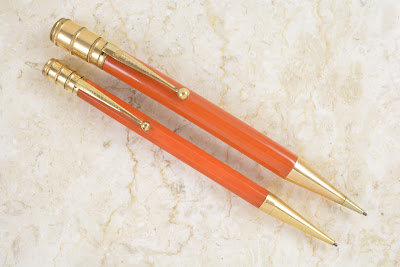 These were made by the Rex Manufacturing Company - and it’s the first time I’ve seen a full length version of their “four horsemen” patent pencils (I’ve seen ringtops marked Edison Pen Company – see http://leadheadpencils.blogspot.com/2015/01/two-out-of-four-horsemen-aint-bad.html).  This one is identical, just slimmer ... down to the clips with that distinctive, olde-English style font: 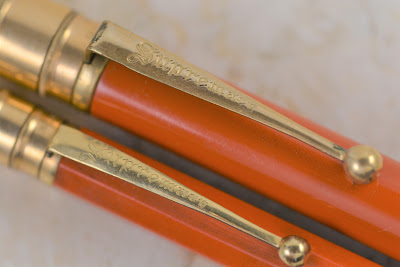 The slim model, however, is marked with McNary’s earlier patent date of February 19, 1924: 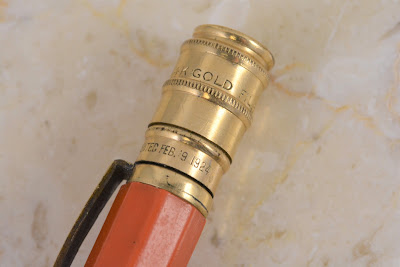 This is one of the few brand which is known to have produced pencils using this earlier patent – Artcraft, John Holland and Pick were also among them.   McNary pencils, at least the hard rubber ones, are normally shorter.  Here’s my early McNary patent Supremacy shown for comparison: 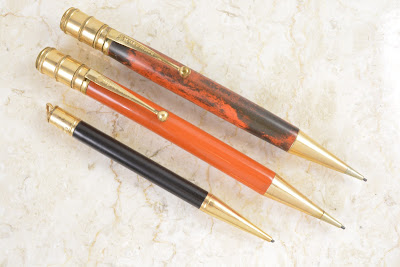 I didn’t express an opinion as to who was behind the Supremacy when I wrote The Catalogue, but since I was writing this one up I decided to take a stab at figuring it out.  What I’ve learned is that several sources out there have it wrong: the notion that the Supremacy was a house brand for Macy’s is, in this case, inaccurate.

At least, as to this Supremacy.

R.H. Macy & Co. did adopt a version of the name for various brands of products but, as several people have commented in passing, they did so for the purposes of capitalizing that “Macy” was included within the name . . . hence, products so branded would be named “SupreMacy” or “Supre-Macy.”  I have a tube of leads which back that up: 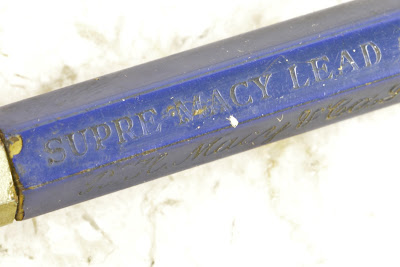 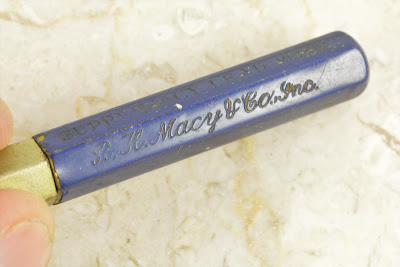 Note that the word is in block print and clearly hyphenated: Supre-Macy.  That’s not a match, but I found one that is.

The clue that broke this one open was observations by a couple pen collectors of a Supremacy-marked combo marked “Supremacy” just like this on the clip and stamped “Supremacy Pen Medford Mass.”  I can’t get permission to use the photos here, but they were posted at http://fountainpenboard.com/forum/index.php?/topic/392-killer-os-red-hard-rubber-combo-supremacy/.  A bit of poking around turned up a notice in The American Stationer on May 4, 1918, in which it was reported that the W.L. Henderson Ink Company, of Waltham, Massachusetts, had relocated to a new facility on Summer Street, Waltham.  The article popped up only because R.C. Kirk, the company’s treasurer, was from Medford: 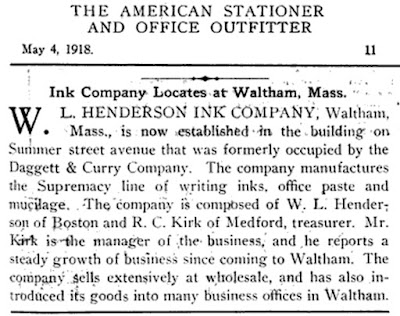 A month later, the company changed its name to the Supremacy Ink Company.  And guess what their labels looked like: 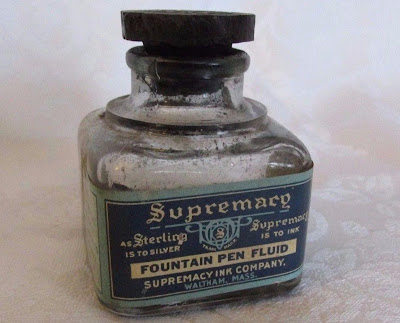 The label indicates a trademark was registered, which might answer the question.  I haven’t listed it in American Writing Instrument Trademarks 1870-1953 because, as I explained, I couldn’t track down all the ink trademarks without expanding the search (and the book) far beyond available resources.  Also, since my search methodology relied on subject matter indices prepared by the patent office, a trademark could remain hopelessly buried if the first named product wasn’t “pen” or “pencil” . . . so a trademark for “ink, pens and pencils” would be indexed under the Is . . . and once the patent office started classifying their index - putting pens and pencils in the paper and stationery category (Class 37), inks became even more remotely listed, along with things like paints.

I searched for awhile, hoping to find a trademark filed by the Supremacy Ink Company or by Henderson Ink for the Supremacy name and logo, hoping it would indicate the mark was used by them also on pens and pencils - no luck yet.  But I did find this:

There’s that word . . . “produce.”  One commentator suggested that the Supremacy fountain pens were made by Kritikson Brothers in Chicago, and I can neither confirm nor refute that.  Who manufactured these pens may be different from for whom they were manufactured – the latter of which was the “producer.”  A Chicago connection might make some sense, even though Waltham, Massachusetts is close to Providence, Rhode Island, where Rex manufactured my Supremacy pencils (at least everything but the barrel).  After all, Rex had significant ties to Chicago, supplying Sears, Montgomery Ward and Clarence E. Barrett.

Nor am I ruling out the possibility that Macy’s later acquired the Supremacy brand from Supremacy Ink Company - but I think it is clear that at the time these writing instruments were made, Macy’s had absolutely nothing to do with it.