My longtime friend John Hall was so proud that one of his pencils was included on the cover of Volume 6.  When the book arrived from the publisher last September, I looked forward to hand-delivering him his copy, signed on the title page, “For Princess.”

“Princess” was our inside joke: years ago, a mutual friend was getting all worked up over something trivial at a pen show – “Settle down, Princess,” I said, and the crack caught John so off guard that he guffawed, back in the days when John could muster a guffaw.  The name stuck.

As John’s COPD worsened, his belly laughs wore down to a smile and a quiet chuckle under his breath.  We still managed to attend six or seven pen shows each year together, hauling his scooter and oxygen in the back of my truck and setting up at adjoining tables.  Our last show together was the 2019 Ohio Show.

I hadn’t seen John since, although we talked on the phone every week or so to catch up.  “I’ll bet you’re bathing in Purel these days,” I joked with him last spring, when the pandemic shut everything down.  “Boy, you ain’t a-f***in’ kidding!” he said.  If you knew John, you can hear him saying that.

When Volume 6 arrived from the publisher, I called John and offered to bring over his copy and a bottle of Scotch.  I’ll set up a lawn chair in your front yard, I said – Amy can bring your book inside along with a drink, and we’ll toast through your front window.  No, John said.  He just wasn’t feeling up to it.

On September 25, 2020, John called me while I was with a client, so I couldn’t answer.  I assumed he’d seen something on eBay that looked interesting or there was amusing drama within our circle of pen friends, but since I don’t have voice mail set up on my cell phone John couldn’t leave a message.  I called back after things quieted down by mid-afternoon, but John didn’t answer.  John had his phone with him all the time, and I couldn’t remember a time he didn’t answer.

I tried again an hour later.  No answer.  No response to increasingly frantic texts, either.

John’s wife Amy called me a couple hours later to confirm my worst fears.  For a couple of days John had been convinced their cat had chewed holes in his oxygen line, because he wasn’t getting any air.

It wasn’t the cat’s fault.

I was allowed to visit John in the hospital Sunday morning.  I’d taken along a couple gifts I’d been saving for the next time I saw him: 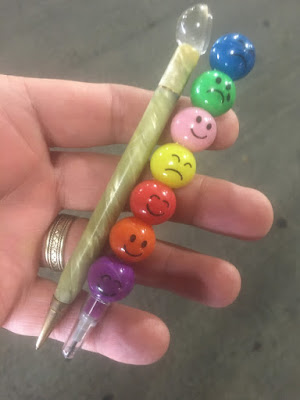 I’d bought a pack of four of those goofy emoji pencils months earlier - it was one of those lots you buy from China for a buck plus fifty cents shipping, then a month or two later they arrive on your doorstep.  I’d originally bought them to present one to Joe Nemecek as a joke - Joe, predictably, was neither amused nor willing to add one to his collection.  I planned to give another one to John the next time I saw him . . . but I never anticipated how the different faces would so perfectly encapsulate everything racing through my head that day.

The pearl pencil on the left was something that had turned up online - and I knew it was destined for John.  These were made by the Nichols Products Corporation, best known for the Tri-Point and those goofy RCA pencils, but this one had the perfect name imprinted on the barrel: The Nichols “Princess Pearl.”

Amy was at home and John’s son was flying into town, so it was just John and I for two hours or so, accompanied by machines beeping away all around us.  I think John knew I was there as I jabbered away about the pencils I’d brought to give him, and I called a few of our mutual friends on speaker so John could hear them say hello.  I was allowed to stay in the room even after John’s family arrived, and John peacefully slipped away late in the afternoon.

It was weeks before I could even talk about John without breaking down, and I will beat myself up for the rest of my life that I didn’t take his call that busy Friday.  Paul Erano asked me to write an obituary for his Fountain Pen Journal - 150 words, he said.  If you count them, there’s exactly 150.

I told myself life goes on, and I started work on a book about the Dur-O-Lite archive, titled “Dur-O-Lite: The Clandestine Company”: 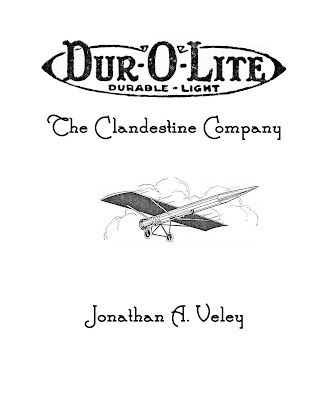 Chapters and photographs came together nicely at first, but progress slowed down after the holidays. By January, I would spend a couple of hours writing and have only a paragraph or two to show for it.  Then for three weeks, I didn’t touch it at all.

My friend Felix Tarasco, who had only just learned about John’s passing from the obituary in Fountain Pen Journal, sent me an email in early February to tell me how sorry he was.  In an instant, all that grief I have been pushing down roared back to the surface and I was consumed for the remainder of the day.

In the introduction to Volume 6, I wrote that I was reviving this blog as a way to stay connected, since a complex, solitary project like the Dur-O-Lite book would have been unbearable during the isolation of the pandemic.  I didn’t listen to my own advice, just as my senses of loss and isolation went off the charts with the death of one of my closest friends.  I shut the world out.

I have never stopped photographing new finds since I last signed off.  As I pawed through them, I remembered how much I really like writing these articles, how many amazing new things I’ve learned, and how much I really, really want to share it all with you.

I know this will help me.  I hope you’ll enjoy them, too.

Email ThisBlogThis!Share to TwitterShare to FacebookShare to Pinterest
Labels: Nichols