The main reason I drove all the way to Chicago for the Fred Krinke auction was for the all-stainless Eversharp Skyline.   There was one other item in that auction I was really hoping to bring home, although it was in distant second place: 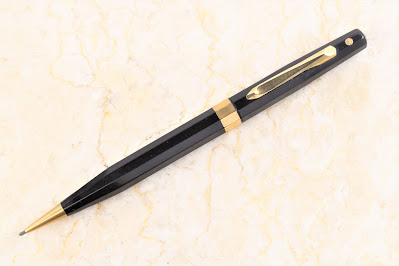 In another article, widely read mostly because of the harsh criticism it generated (Volume 3, page 29), I suggested that perhaps the lack of cutouts in these bands had something to do with the pens they were meant to accompany.  Eversharp-made Gold Bond pencils had cutouts in the band if they accompanied piston-filled Gold Bond pens and lacked them if they accompanied less advanced lever-fillers, so I suggested Eversharp may have done the same thing on its regular line.

The illuminati descended, with several people saying they had cutout-band caps on many a lever-filler.  I don’t recall anyone saying they had plain-band pens with piston fillers, but someone might have.

Never mind it’s easy to switch caps.  Never mind that in the late 30s, Eversharp wasn’t particularly consistent - maybe they intended that at some point then abandoned the idea.  And of course, never mind that there is no known documentation to say either way whether I was right or wrong.  Meh . . . you know what opinions are like, and I have one, too.  Some might say I am one.

My purpose in chasing this one, though, wasn’t to rehash old arguments . . . even though I know I just did (maybe I’m nudging the illuminati a bit to see if anything’s turned up in the years since to prove me right or wrong).  I wanted this one because I’ve never seen one in black before - all the other examples I have seen are green or burgundy: 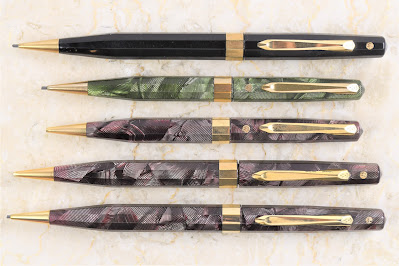 And that, as Forrest Gump would say, is all I’m going to say about that.

But with travel expenses and a day out of the office, I planned to buy more than just these two items if they were going cheap, for resale to offset some of the cost of attending.  The auction included many lots of Eversharp pencils, and many did in fact go very cheap - most of my bids were for friends, and they did very well, but there were three lots I took home for myself. The first was this group: 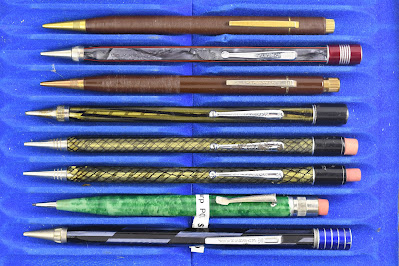 There was only one pencil in this group that interested me at the time - I knew I didn’t have an Eversharp Four Square in that weird grayish/bluish marble with red pinstripes on the corners: 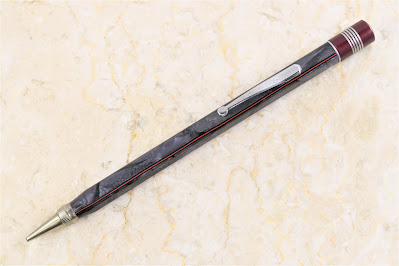 I have scads of these in different colors (see Volume 5, page 130 for the full story - the article also appeared in The Pennant), and I’m always keen to find another color.  This example is from the height of Eversharp’s gimmickry in the series, with the supposedly more ergonomic tip and the reversible eraser cap that neatly conceals the eraser when not in use.  It also sports the viewing window on the back side, with the red spot indicator to show how much lead is left inside: 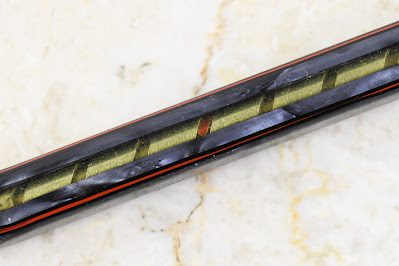 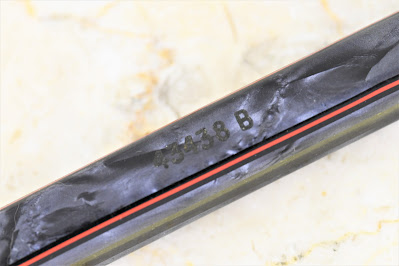 Something I neglected to mention in my last article on these was that Eversharp also had a thin model of this pencil, without the indicator window and with hexagonal barrels: 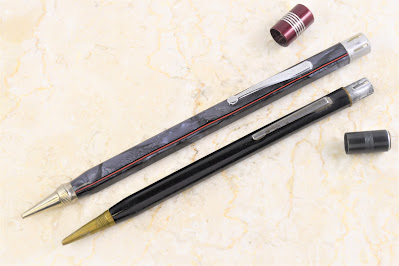 I’ve got a few of these, and the one I found with an orange cap tells me there may be other variations out there to explore: 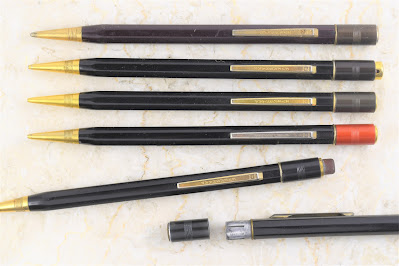 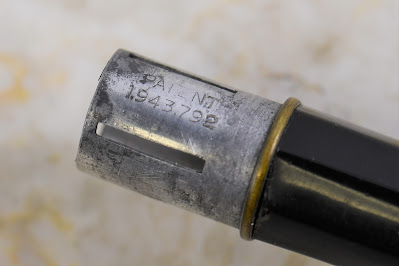 As I pawed through the other items that came with that lot, I noticed there were two variations of the brown pencil – one with ribbing only halfway up the barrel, and the other ribbed all the way to the top: 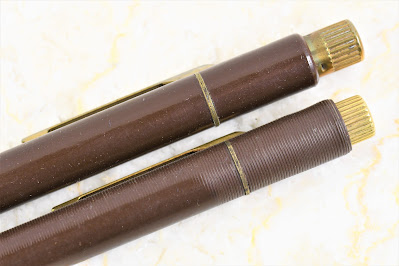 I ended up adding both to the collection: 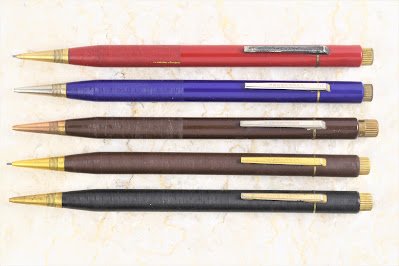 I’d noted the fully-ribbed variant here before when that black one found its way to me (Volume 3, page 89), imprinted with the name of Edd Dawson, the legendary pioneer of pencil collecting.  Time will tell whether the red and blue ones also exist with fully ribbed barrels!

Another lot which was going cheap during the auction included these two Doric repeating pencils, which I bought for resale: 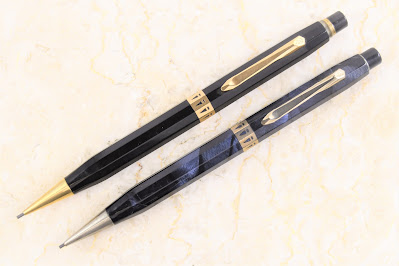 I knew - or thought I knew - that these were duplicates after checking the rudimentary pictures in my “World’s Largest Eversharp Collection” post (Volume 5, page 32).  Here’s a better shot of the Type IV band examples: 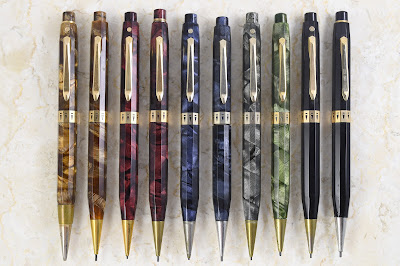 Eversharp must have had trouble with the brown celluloid - note that one has a brass replacement sleeve, likely added to replace deteriorated material, and the other one is starting to go, too . . . even though it’s as NOS as they get, complete with a price sticker.  Incidentally, Eversharp Doric repeaters also come with Type III bands: 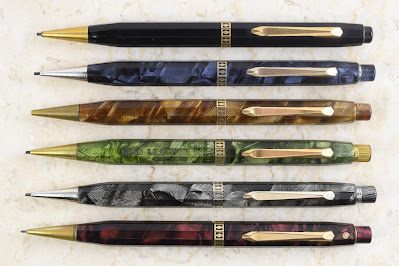 Note the rudimentary brass button on the green example?  All the green ones I have found like this have been advertisers, and all have sported that button.   Maybe the green ones were reserved as lower-cost advertisers  . . . maybe I just haven’t had the luck to find a regular issue example with matching button.

Even though the examples from the Krinke auction appeared to be duplicates, I always make it a habit to compare anything that comes my way to what is already in the collection.  Dang it, I guess these aren’t inventory after all . . . this is something I’ve noticed before, but I don’t think I’ve ever mentioned it here at the blog.  There’s two types of imprints on these, and both of the ones from the Krinke auction have the other one from what is represented in my collection: 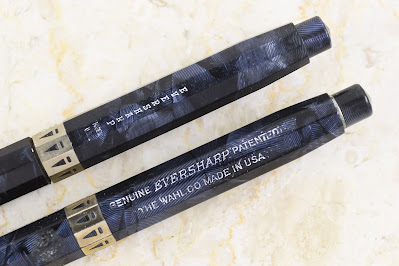 Some sport the simple Eversharp imprint found on all twist-model Dorics, but others feature a more elaborate imprint reading “Genuine Eversharp Patented / The Wahl Co. Made in USA.”  Judging from all of the Type III and Type IV repeaters in my collection, neither imprint is more rare than the other, and I don’t know which came first or whether both were offered at the same time.

Perhaps it’s silly to keep these just because of that little difference, since all they will do is invite me to start chasing alternate imprints on all the other ones . . . but for now, given how little they cost me, here they stay for the time being.

One other lot I wasn’t planning to bid on was a sleeper: 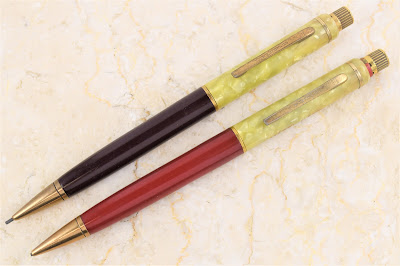 These Skyline-based repeating pencils didn’t have a matching fountain pen to my knowledge, so they haven’t enjoyed the same attention as Dorics and other Eversharp lines that did.  On page 75 of The Catalogue, I lump them in with the “Press Clip II” family - that’s the group with a stapled-on clip and one narrow band mid-barrel.

Mechanically, these built every bit as well as all the other repeaters Eversharp made, and that pearl top – “mother of toilet seat” as it is derisively referred to in some circles – gives it a bit of extra interest.  However, Eversharp skimped a bit on the aesthetics: the trim on these is usually badly corroded, and the gold plating is so thin that it’s often tough to tell whether one of these has chrome or gold trim.  Many of these were advertisers, and while the screen printing is usually partly worn away, at least what’s left is easily removed to make them look nicer.  Grading these new ones on a bell curve, I’d rate their condition near the top of their class: 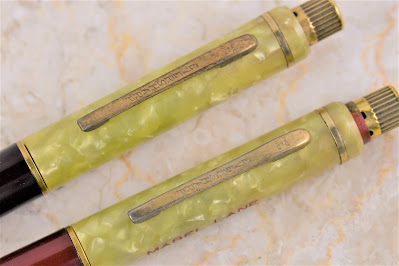 I haven’t delved into this series since The Catalogue was written, so I’m long overdue to post a current family photo: 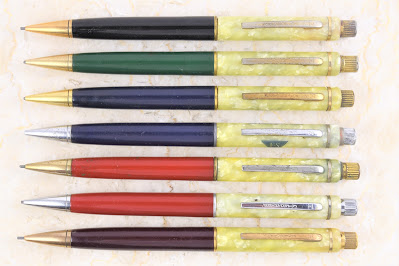 The burgundy example from the Krinke auction is a new one for me, and note that there’s both chrome trim and gold wash (I can’t even bear to call it “plated”) trim examples.  I separated two examples from the rest of the herd to address separately: 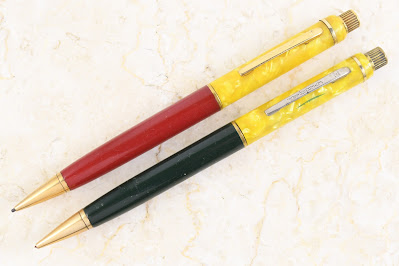 Some of these have a much darker, yellow top.  I think the color is too even to be age discoloration . . . perhaps it’s just a different dye lot, and perhaps some late 40's/early 50's catalog will establish that customers could choose either white or yellow pearl.

Three lots bought on a whim, anticipating 12 pencils for resale . . . and I’m keeping 7 of the 12.  This investing thing is going in the wrong direction!