I’ve saved the most fascinating new wrinkle in the Henber story for last: 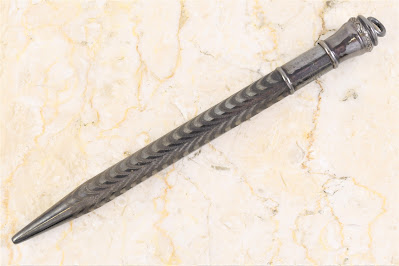 When I saw this one, I instantly recognized it as a Henber.  Of course it’s a Henber, right?  Here’s the ringtop Henbers from the article a couple days ago: 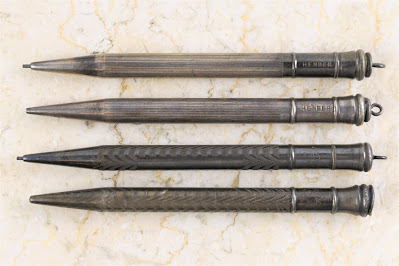 As was the case with yesterday’s installment, I was confident there was a mistake in the listing, but I knew this would be really interesting if the listing was actually right.

The listing was actually right: 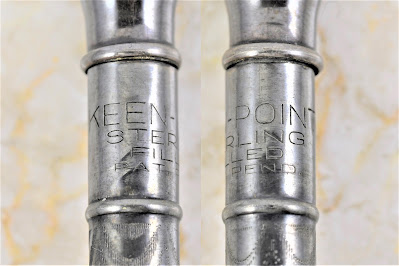 I pull Occam’s Razor out at every opportunity, mostly to regulate my wild imagination.  Occam’s Razor suggests that the far-flung Henber Company in Minneapolis pulled a cool-sounding name out of thin air, slapped it on a pencil and was quickly reprimanded by those who rightfully claimed the name to knock it off.

Occam, however, needs to pack that switchblade away for a moment.  Perhaps that is not the simplest explanation.

The “Keen-Point” name has (until now) been found in two, well-documented and apparently unrelated incarnations.  The earlier one was O.R. Johnson, who offered metal Keen-Point pencils in 1921 and 1922:

Johnson was marketing his Keen-Points at the same time Henber was active, between 1921 and 1923, so there’s a bright line between two possibilities: either Henber blundered into using the name without Johnson’s permission and Johnson put a stop to it, or Johnson was somehow involved with Henber.

And then there was Charles Keeran, who adopted the Keen-Point name after he was ousted from Autopoint the second time in 1924.  Keeran registered a trademark for “Keen-Point” in a distinctive font: 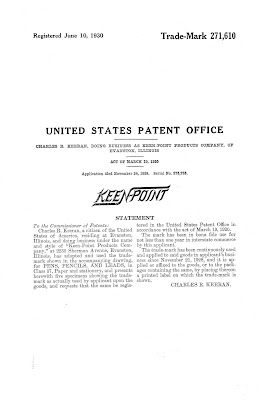 Keeran claimed in his registration that he first used the mark on November 21, 1928 – but that’s this specific mark.  He might have used the words “Keen-Point” earlier, and Keeran’s activities after he left Autopoint are difficult to piece together.  In Chapter 7 of A Century of Autopoint, I show how his patents filed after 1924 show that he first dusted off his “Keeran Products Corporation” to market “The Keeran Pencil,” in 1925, then affiliated himself with Julius Swanberg and Robert Chelton for a short time around 1926.

But there are holes in the story, and plenty of room in the timeline for Keeran to scoot up to Minneapolis for a bit to pick up the pieces of Henber after the company called it quits in early 1923 – perhaps after Samuel Kanner was finished playing around with it.

History is what floats to the surface when facts are assembled in chronological order.  The three wrinkles presented in these last three articles provide tantalizing new facts – the infuriating part is I don’t know in what order to put them:

3.  The Louis F. Dow Co. offered sterling Dow pencils engraved with the same, distinctive chasing on the barrel as the Henber.  One of the examples sports a logo on the box lid dating it to sometime after August, 1923, but that doesn’t mean sterling Dows like this weren’t offered earlier;

4.  Whoever made Samuel Kanner’s “Nupoint” pencils, advertised between 1921 and 1924, also made at least one identical pencil marked “Henber”;

5.  There is a gap between the time O.R. Johnson Co. offered “Keen-Point” pencils in 1921-1922 and when Charles Keeran claimed he first used a stylized “Keen-Point” logo in 1928.  Keeran might have used the name (but not the logo) as early as 1924, when he departed Autopoint.

The artifacts themselves can only tell us so much.  One of these days, I’m hoping some documentary evidence will surface to make some sense out of all this.