One of the distinctive features that makes Henber pencils stand out from the crowd is the way the chasing extends down the barrel past the point at which it begins to narrow down to the tip: 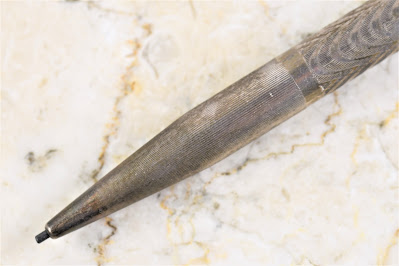 After writing that article, I suppose that feature was rattling around in the back of my mind as I cruised the online auctions – so this one stood out: 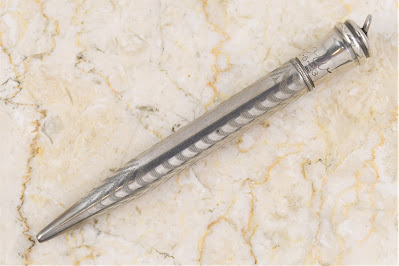 The picture suckered me right in, with that great chasing and a much brighter finish than you’ll see on most Henber pencils (being somewhat of a traditionalist, I never polish silver with nice patina).  However, when this one arrived I saw it was no Henber . . . and I should have remembered what it was: 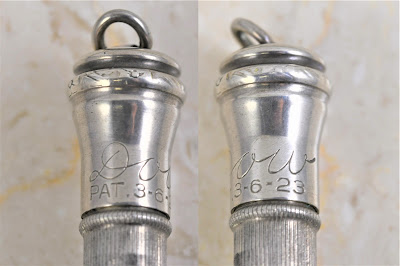 “Dow / Pat. 3-6-23.”  The Dow was one of my early favorites here at the blog, featured in an article titled “The Real Housewives of Minneapolis” (Volume 1, page 282).   At that time, I was focused on the patent history.  The title of the article was derived from the inventors, Elizabeth O’Brien and Mary C. Vierling of Minneapolis, Minnesota, who applied for patent number 1,447,397 on April 6, 1921: 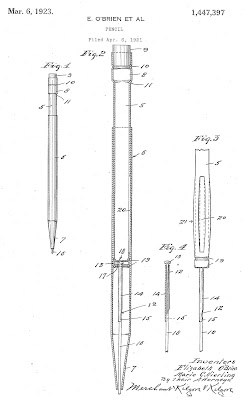 The Dow, produced by the Louis F. Dow Company of Minneapolis, has an inner sleeve which slides inside an outer shell, held in place solely by friction.  The lead simply sticks into the end: 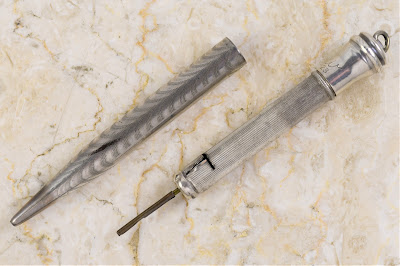 Telescoping tubes held in place by friction were nothing new; in fact, another Minneapolis company, Brown and Bigelow (best known as makers of the Redipoint), had patented a similar design in 1921 - the patent was issued to Brown and Bigelow’s dream team of inventors, Howard L. Fischer and Frank J. Kristofek, on April 19, 1921, just two weeks after O’Brien and Vierling filed an application to patent the Dow: 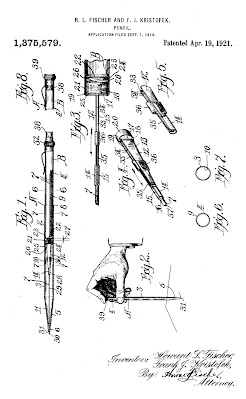 It would be four years before the case was finally decided.  On August 9, 1930, the Federal Appeals Court for the Eighth District issued its opinion affirming the decision of the Minnesota District Court exonerating Dow (Brown Bigelow v. Louis F. Dow Co. (C.C.A. 8) 42 F.2d 785).  The Court noted that the prior art of using frictionally engaging tubes was “a crowded one,” including among many others Sheaffer’s venerable patent for the Sharp Point, issued November 5, 1918 – remember how that spare lead magazine doubles as a drive tube? 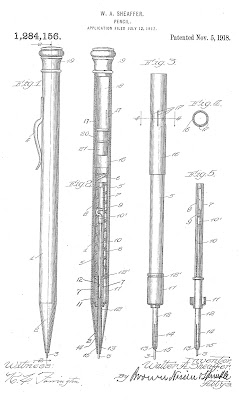 Nice try, Judge Booth said to Brown and Bigelow.  With so many telescoping tube elements in the prior art, in order to uphold a patent, the specific manner in which those tubes engage is the only thing that can be patented.  Since Fischer and Kristofek did not claim the specific way O’Brien and Vierling’s pencil was held together, Fischer and Kristofek couldn’t add that claim to an earlier patent as a “reissue.”

The Court, however, made it clear that it was not ruling that the O’Brien/Vierling patent was valid – Judge Booth only found that it did not infringe on the Fischer/Kristofek “reissued” patent.

The threat of infringement litigation likely started in 1923, when the Dow patent was issued and the Brown and Bigelow reissue application was filed.  That would explain why the advertisements for the Dow I could find were published in the early 1920s, beginning in October, 1922.  This particularly nice ad, for the checking pencil version, ran in Office Appliances in November, 1922: 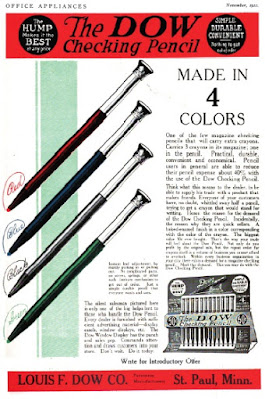 All the advertisements I found were for more humble versions of the pencil such as these, with plain, painted barrels rather than the finely engraved sterling example at the beginning of this article.   Finely engraved . . . exactly like the very uncommon engraving on another Minneapolis brand – the Henber.

Was there a connection between Louis F. Dow and The Henber Company?  Perhaps, but one other detail has me thinking it was as a successor rather than a supplier.  As I filed away my Dow ringtop, I had forgotten that I had a full sized version in the box (you would think I would have remembered that, since it was featured here in Volume 2, at page 42): 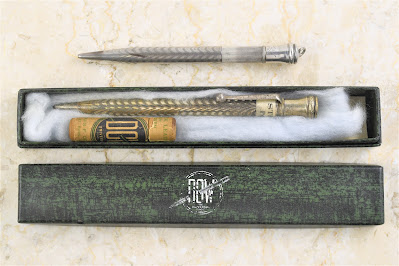 Note the logo on the box: in the years since I last wrote about that pencil, I’ve put together a nifty little reference book titled American Writing Instrument Trademarks 1870-1953, and the trademark registration for that mark is among the more than 2,200 trademarks included in the book: 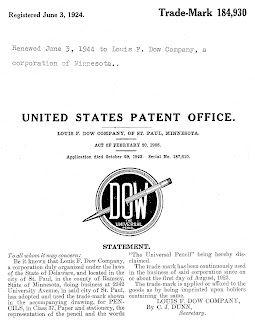 According to the registration certificate, the Louis F. Dow Company first used this mark in August, 1923 – the Henber, according to my research, vanished without a trace in February, 1923.

Were sterling Dow pencils also made earlier, while Henbers were also being made?  Perhaps, although one would expect the flagship, luxury models to be featured prominently in Dow’s 1922 and 1923 advertisements if it was.  The timeline, like Clark Kent entering a phonebooth and emerging as Superman, suggests that Henber’s operations were absorbed by Louis F. Dow.

Maybe.  But that doesn’t explain the other two wrinkles I have to show you.