Checking Off All the Boxes

Note:  this is the third part of a series.  If you landed here directly, part one is posted at https://leadheadpencils.blogspot.com/2021/04/perfect-on-third-try.html.

As mentioned earlier, the sudden, inexplicable demise of the Perfect Point pencil is like a century-old murder investigation.  Something catastrophic must have happened in order for Stull-Boylson to collapse just as it appeared the Perfect Point was rocketing in popularity.  Did the Attleboro firm that made the pencils obstruct Stull-Boylson’s efforts to start making the Perfect Point on its own?  Did the Wahl Company, makers of the “Perfect Point Eversharp” engage in a Trojan Horse operation to get control of the company, only to kill it off?

The first clue I found as I searched for Attleboro pencil manufacturers was a curious reference: 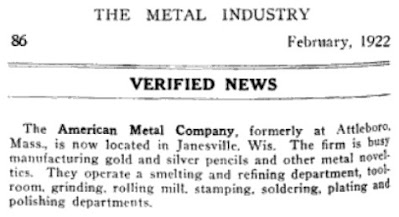 In the February, 1922 edition of The Metal Industry, under “Verified News” a firm named “American Metals Company,” “busy manufacturing gold and silver pencils and other metal novelties,” had packed up its stakes and left Attleboro, Masachusetts, relocating to Janesville, Wisconsin.

That can’t be random, I thought. There is only one logical reason for anyone in the writing instruments business to move to Janesville: The Parker Pen Company.

I’ve described Parker’s entry into the mechanical pencil business as an “Oh Crap” moment: after decades of ignoring mechanical pencils as companions to the company’s pens, Parker realized by 1921 that Sheaffer and Wahl had come out of nowhere to command a significant market share at Parker’s expense.  Pencils were no longer a point of distinction among manufacturers, an extra that could et a company apart from the pack.  Pencils had become a point of parity, and any company that wasn’t offering them by 1921 was falling behind. 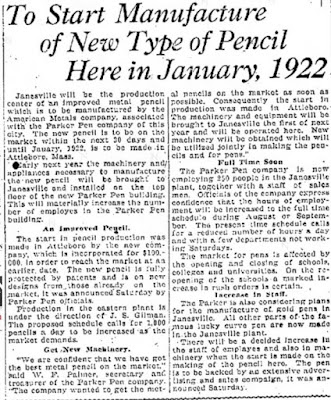 On June 4, 1921, the Janesville Daily Gazette reported that Janesville would soon be the production center for a new mechanical pencil to be made by the American Metals Company, “associated with the Parker Pen Company of this city.”  The article states that production “in the eastern plant” was under the direction of J.S. Gilman, but all of the machinery would be relocated to Janesville and installed on the fourth floor of Parker’s new building by the beginning of 1922.

Although the article states that American Metals Company was a new company, incorporated for $100,000, it stops short of stating that it was incorporated by Parker representatives.  A short piece in The Capital Times (Madison, Wisconsin) on June 7, 1921 stated that American Metals “will be associated with the Parker Pen Company,” suggesting that Parker was in the process of purchasing an ongoing concern: 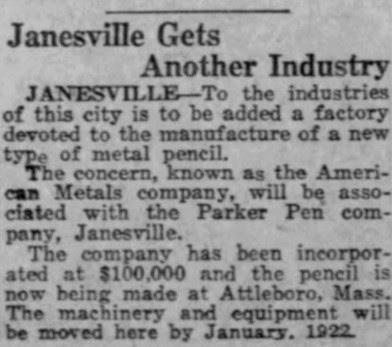 The Janesville Daily Gazette reported on September 24, 1921 that Parker’s new pencils “are now being manufactured in Attleboro, Massachusetts”: 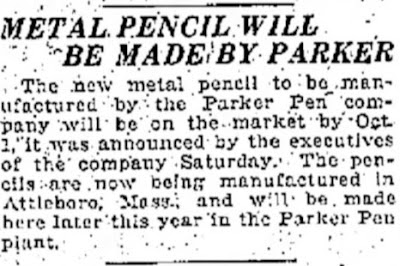 On October 15, 1921, The Janesville Daily Gazette indicated that the pencil was on the market as of that week and 5,000 pencils had been presold “without even a sample to show.”  The article further states that American Metals Company was, at least by that time, a wholly owned subsidiary of Parker: 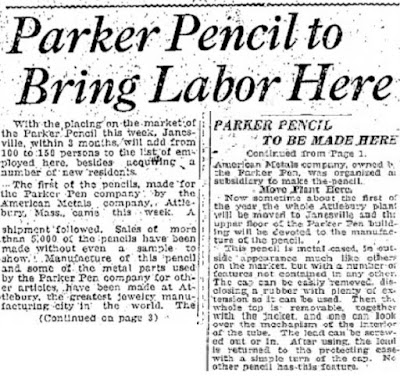 I haven’t been able to find evidence concerning when the “American Metals Company” was established, or by whom.  Another “American Metal Company,” from New York, was one of the largest American smelting companies – it was broken up during World War I when it was discovered that controlling interests in that company were owned by German companies, which used American Metal to divert American metallurgical products for use in the German war effort.

Even if we were to assume that Parker set up all the machinery and equipment to make pencils from scratch, Parker wouldn’t have set everything up in distant Attleboro, only to move its new company to Janesville just a few months later.  There are two possibilities:  either American Metals Company was already in existence and Parker bought it, or Parker set up a new company for the purpose of buying some other existing business.

That suspicion is further supported in Parker’s 1923 catalog, a copy of which resides in the Pen Collectors of America’s library.  The catalog illustrates pencils in “triple plate,” sterling, gold filled and green gold filled: 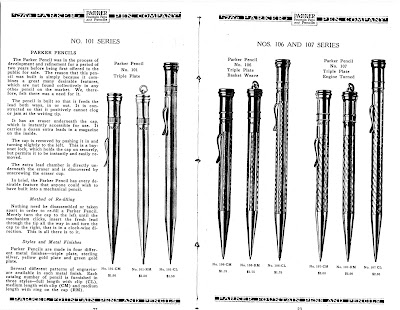 Note the introductory text, in Parker’s own words: 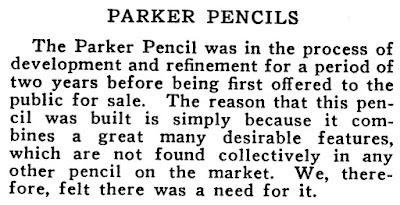 The addition of the American Metals Company to the Parker story explains something else about Parker’s entry into the pencil business: I reported Parker’s patent for what would become Parker’s “Non-Clog” (later “Lucky Lock”) pencil in American Writing Instrument Patents Vol. 2: 1911-1945: 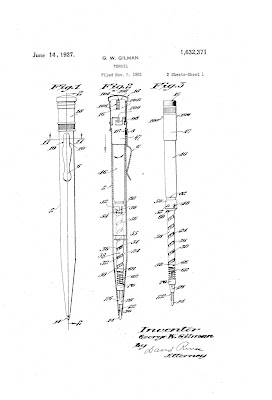 The patent, number 1,632,371, took an unusually long time to be issued.  The inventor was George Washington Gilman – of Attleboro, Massachusetts, and doubtless a relative of the “J.S. Gilman” whom Parker reported was supervising pencil manufacturing in Attleboro.  It was applied for on November 7, 1921 and was assigned, “by mesne assignments,” to Parker when it finally issued on June 14, 1927. 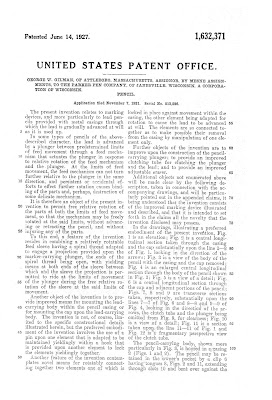 “Mesne assignments” means there was at least one intervening assignee, probably American Metals Company – that would make sense, because Parker likely absorbed and dissolved American Metals by 1927.

Gilman patented two other innovations, both of which issued more quickly and both of which were assigned to American Metals Company.  The first, patent 1,442,720, was for a price marker band, applied for on July 5, 1922 and issued on January 16, 1923.  The text indicates it was made of metal “or other resilient metal,” clipped around a pencil or pen and removed at the point of sale for reuse: 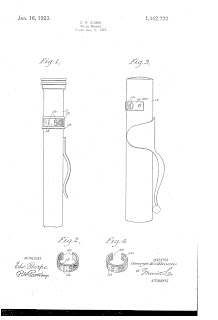 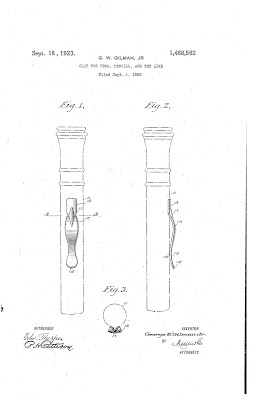 A few early Parker pencils made by American Metals Company have worked their way into my collection.  In ringtop configuration, I’ve found two sizes not shown in Parker’s catalogs: an extra short model, and an extra thin one: 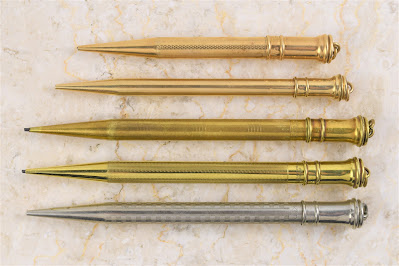 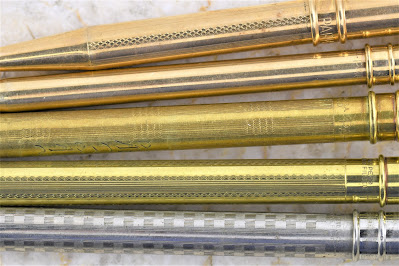 All but one are stamped below the cap; the short stubby example has the stamp on the cap: 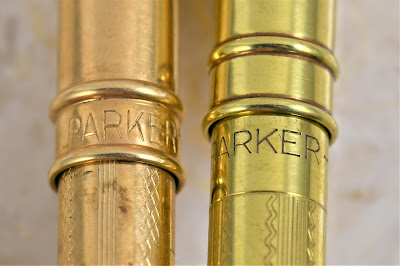 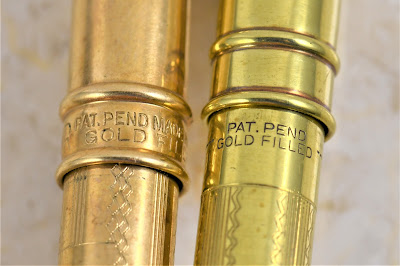 Side clip models track what is shown in Parker’s 1923 catalog, in two sizes: 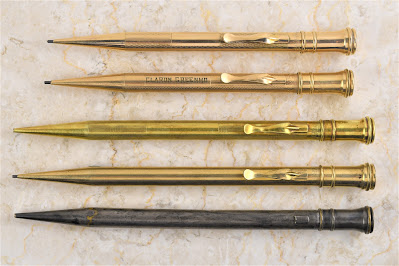 It’s a real shame the clip is broken on that sterling example - that pattern, like undulating waves, isn’t shown in the catalog. 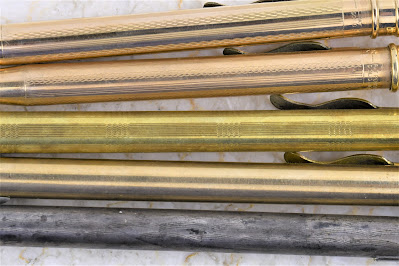 I look at these pencils now with a fresh set of eyes.  Last fall, Wayne Bagley asked me to have a look at a Lucky Lock pencil of his that wasn’t working.  After a bit of fiddling, I figured out how to extract the mechanism and replace it with one I had on hand: 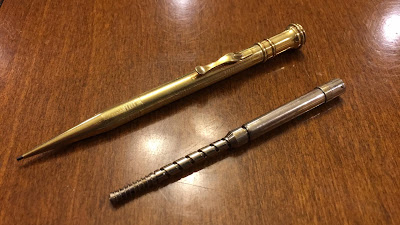 I need to find Wayne’s broken mechanism, so I can further dissect it and compare its components to the Acme – I know that I kept it, but finding it is like roaming a vast junkyard.  I’m sure that when I find it, I’ll also find undeniable similarities: all bells and whistles aside, at the core of a Lucky Lock pencil is that same propel-repel device I found inside the Acme.

History floats to the surface when seemingly random facts are put in order.  When I overlay the Parker, Perfect Point and Acme stories, a seamless version of events emerges:

1.  Jacob Stull invents the Perfect Point sometime prior to June of 1919, when he applied for his patent.  He becomes associated with E.J. Boylson of Attleboro, Massachusetts, who arranges for a firm in Attleboro to manufacture Stull’s new pencil.  I believe that firm was owned by George Washington Gilman and J.S. Gilman – maybe it was called “American Metals Company,” but maybe it was called something else.

2.  Stull-Boylson was a customer of the Gilmans’ “eastern plant,” but the arrangement was not exclusive.  In addition to manufacturing “Perfect Point” pencils, the Gilmans manufactured Acme pencils for jewelry wholesaler Max J. Averbeck using much of the same machinery, but with internal differences developed independently by George Washington Gilman that differentiated the Acme, so that it didn’t infringe on Stull’s patent.

3.  At the same time, George Washington Gilman was  developing another pencil design, which would ultimately become the Lucky Lock.

4.  The Parker Pen Company decided to offer mechanical pencils to accompany its pens – Parker claimed that decision was in 1919, but it was probably in 1921, due to market pressures exacerbated by the 1921 Depression.  Parker didn’t want to start from scratch (and didn’t have time to do so), so the company approached the Gilmans and become interested in acquiring the Gilmans’ company, including the new design George was developing.

5.  By mid-1921, Parker announces that it will become affiliated with American Metals Company, and plans are announced to relocate American Metals from Attleboro to Janesville by the beginning of 1922.  By the end of 1921, American Metals is a wholly-owned subsidiary of Parker; it is unclear whether Parker purchased the company from the Gilmans, or whether it was established by Parker as a standalone company.

6.  At the beginning of 1922, American Metals relocates to Janesville as planned, and its machinery and equipment are installed on the fourth floor of the Parker Pen Company’s new building.

7.  The Gilmans, either through American Metals or through some other company, may have continued to manufacture Perfect Point pencils as the company transitioned to Janesville, but it became increasingly impractical (not to mention awkward) as Parker took over the company.  The Gilmans ceased production of the Acme, and Averbeck is “out of business” as far as pencils are concerned.

8.  Stull-Boylson had no manufacturing capability of its own, and unlike Parker, it had to start from scratch now that the Gilmans’ firm and equipment had become Parker property.  Stull-Boylson scrambled to raise capital in September, 1922, and E.J. Boylson went to Attleboro in October, 1922 to attempt to acquire the machinery, equipment and expertise to continue production of the Perfect Point.  The effort failed, and Stull-Boylson “retired” from the business by mid-1923: the company sold all its remaining stock to a local bookstore and collapsed.

I look at Perfect Point and Acme pencils from a different perspective now, because I think Parker counted the time during which the Gilmans were making Perfect Points and modifying Stull’s design into the Acme as Parker’s two years of “development and refinement” of what would become the Lucky Lock pencil.  Viewed in this light, while the Perfect Point and Acme were independent products with their own separate histories, they are rightly seen as evolutionary steps in the development of Parker’s “Lucky Lock” pencils.