One of Us Needed to Do It

A few years ago my good friend and Loyal Knight David Nishimura penned a nice article for his blog about the Pal line of pencils made by the Hoge Manufacturing Company (the article is posted at https://vintagepensblog.blogspot.com/2016/01/pal-pencils.html).

To sum up, the Pal line was introduced in early 1921, and while David indicates a snippet view indicates there’s a reference to Pal pencils as late as 1928, suffice to say that metal pencils were out of style by the end of the 1920s, replaced by brightly colored celluloids.

American Writing Instrument Trademarks 1870-1953 confirmed what David wrote: the “Pal” mark was registered, and the certificate reveals that the Hoge Manufacturing Company first claimed to use the mark on January 12, 1921: 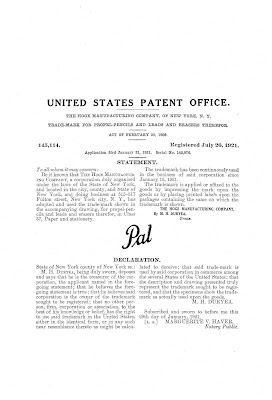 The “Modern,” also manufactured by Hoge, was introduced only the previous year  as mentioned in yesterday’s article (see also “Enough with the Musing” in Volume 3, page 169) . . . at least, that’s the No. 500 propelling Modern.  As my previous article on the brand mentioned, before the Hoge Manufacturing Company delved into propelling pencils, the company offered clutch leadholders under the “Modern” name.  From that earlier article, here’s an advertisement for Hoge’s clutch “Modern,” from The American Stationer on January 2, 1915: 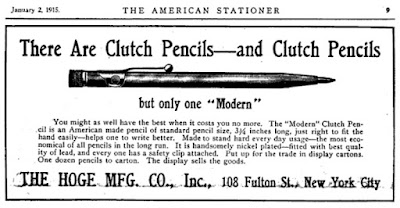 I mentioned recently that it only takes two idiots to set the market in an auction.  Between my interest in the humble budget line of Pal pencils and David’s well-presented article, that makes two potential idiots who might well have set a distorted market for this when this showed up online: 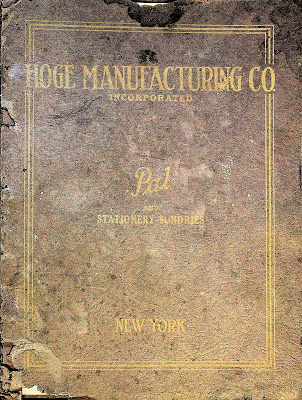 An original catalog of the Hoge Manufacturing Company’s offerings turned up unexpectedly, and David and I both appreciated how unusual it was for one to surface.  We both needed to see what additional details it could add to the story we knew, but we kept our wits about us: either of us would have been happy with a clean, high-quality scan of the catalog, and both of us have the equipment to make such a scan.  Only one of us needed to bid - I was tapped for the job.

I bid the stupid money on the chance that there might be a third idiot out there.  There wasn’t, and I was relieved as the opening bid carried the day.  The catalog is brief – after all, Hoge was largely a one-trick pony, with the Pal as its prized steed: 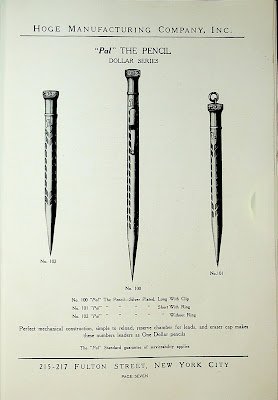 The catalog is undated.  The “Modern” isn’t listed, and neither are the Pal pencils I suspect were referred to in 1928 (I’ll get to that at some point).  The artwork matches that initial flurry of national advertising Hoge generated when the pencil was introduced, so I’m inclined to believe (1) the “Modern,” introduced in 1920, was discontinued quickly for whatever reason and (2) the catalog dates to the early 1920s.

And that is what makes it so fascinating.

As with most trade catalogs of the period, there’s an introductory page which provides a bit of company backgrounds, similar to an “About Us” tab on a modern webpage (modern, that is, in the general sense). The Hoge introduction includes just enough information to piece together something I’ve suspected – but never been able to prove – for years: 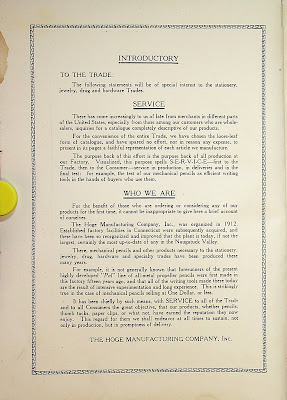 According to the company’s own contemporaneous account of its history, it was founded in 1912 (that bucks a bit of information floating around in several places on the internet, which states that Hampden Hoge founded the company in 1909 – we’ll get to that in a minute).   The catalog identifies Hoge’s location at 157 Fulton Street, New York, which is consistent with what we already knew about the company.  But then there’s a curious detail:  “Established factories in Connecticut were subsequently acquired,” it states.

Curiouser and curiouser, the account becomes.  “For example, it is not generally known that forerunners of the highly developed ‘Pal’ line of all-metal propelling pencils were first made in this factory fifteen years ago,” it states.

The timeline does not appear to line up at first.  If Hoge was founded in 1912 and this catalog is from the early 1920s, that means these “forerunners” were manufactured in Connecticut by someone other than Hoge.  Fortunately, these “proto-Hoges” were still in production when the catalog was published: 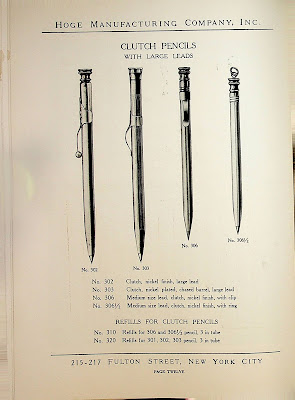 Unmarked clutch pencils such as these are ubiquitous, and I would have trumpeted my suspicions that they were Hoge products a long time ago – if I had not already attributed them conclusively to someone else here at the blog many years ago.  Someone in Connecticut.  In fact, someone in the “Naugatuck Valley,” where Hoge’s snazzy, “most up-to-date” manufacturing facilities were located: 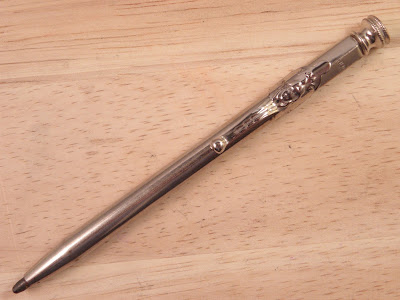 This image is from an article I wrote here at the blog very early on, in Volume 2 at page 255.  The bulk of the article delved into the meaning of the odd face on the accommodation clip, over which the word “UWANTA” is embossed.  After a bit of digging I concluded this was an American Indian’s face, and the clip advertised “UWANTA” cigars: 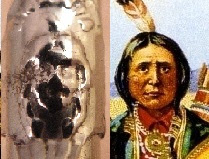 However, before I became sidetracked with the neat story behind the clip, I’d noted something else about these UWANTA pencils – a patent date of June 22, 1915:

Which, I explained, was a reference to patent number 1,114,082, issued to Harry Clarence Welton and assigned to the Mattatuck Manufacturing Company of – you guessed it – Waterbury, Connecticut: 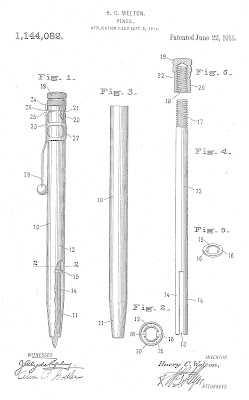 Welton’s patent date doesn’t appear on very many of these, likely because the patent was later invalidated.  After all, there isn’t really anything new about the pencil he devised - Heath was making nearly identical leadholders much earlier, and the Faber “Pony Clip” is exactly the same thing, but with innards made of wood rather than metal.

Hoge’s “Pal” line must have been the tail that wagged the Mattatuck dog for a number of years, given how common they still are today, but metal pencils outside luxury models made by Hicks and the like had largely gone the way of the dodo by 1930.  Hoge reinvented itself, as a manufacturer of stamped metal toys and model trains.

The histories of collectible toys and trains have been much more heavily documented on the internet than writing instruments, and while I haven’t tracked down the original source documents to substantiate the story, all sources agree that the Hoge Manufacturing Company’s toys were manufactured by the Mattatuck Manufacturing Company.

I also found a biographical account of Stuart Edwards Judd, which states that Hoge became a wholly owned subsidiary of Mattatuck in 1940.  Judd, according to this account, served as secretary and treasurer of both companies from 1940 on, becoming the sole owner of Mattatuck when he bought out all of the other shareholders in 1946.  Hoge’s toy lines were discontinued in the late 1940s, after which Hoge served only as a distributor of Mattatuck products until Hoge was finally dissolved in 1958.

Finally, with the missing pieces of the puzzle presented in this Hoge catalog, the entire story is clear.  The Hoge “Manufacturing” Company was a spin-off, set up in 1912 to pursue the exciting new opportunities in the field of writing instruments made in Mattatuck’s factories.  After a few years of spectacular success, Hoge reinvented itself as a toy manufacturer, enjoying additional successes for a couple more decades before folding back into the company from which it originated.

Pencils to toys, dust to dust.