Diamonds Amongst the Rough

Sometimes the circumstances in which a pencil is found suggests its authenticity – “junk box provenance,” I call it.  An online auction brought this one to my doorstep: 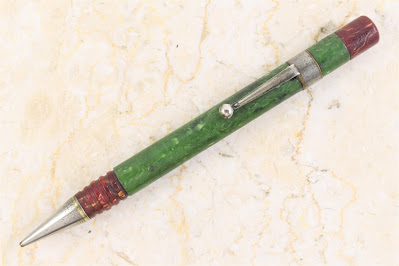 I knew what I would find imprinted near the top when it arrived: “Western Pencil Co. / Los Angeles - USA.”  It was a bit beat up, but I didn’t mind: 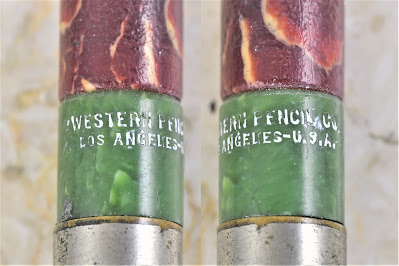 I haven’t seen a two-tone Western before (we won’t count that mismatched jade from the article in Volume 6, page 141).  Someone remarked that the red ends resemble Waterman’s mahogany plastic used on some Model 94 pens and pencils during the 1930s.  I think this has more red in it: 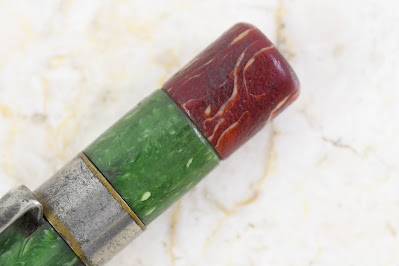 I also think it was made earlier - too early for that Waterman plastic.  The Western Pencil Company was organized by the buyers of the Dollarpoint Pencil Company, also of Los Angeles, which made metal Dollarpoint and Artpoint pencils using the same mechanism in the early 1920s.  Dollarpoint’s entire operation was sold at auction on February 12, 1925 (see Volume 4, page 267); while Western continued to exist at least in name until 1938, the ribbed front section and longer nose on this new addition indicate earlier production than the later ones with smooth, short-tipped noses: 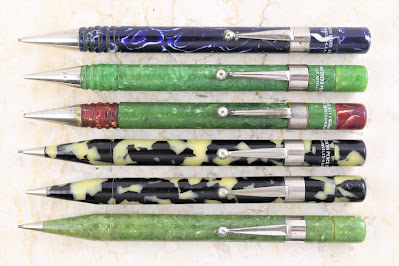 The noses on these are removable, which begs the question whether this was built as a two-tone or whether parts have been replaced – that’s where the junk box provenance comes in.  First, you’d need to find spare Western parts, and as hard as these pencils are to find, that would be a tall order.  Then, consider the other things that accompanied the Western in that lot: 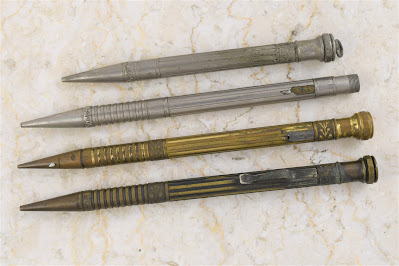 Rough?  Yes, they are . . . but finding a Western in the company of four Artpoints in any condition (let alone what’s left of the harder to find gold filled and “statuary bronze” models) strongly suggests that this bunch came from a source close to the company.   I wouldn't mind finding a Western in all red, but I think it was supposed to be like this.

But speaking of all red Westerns . . . this one slipped under the radar, in another online auction from a different sort of junk box: 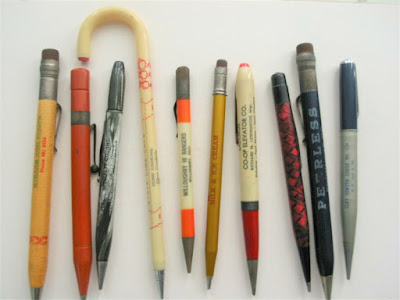 Surrounded by kitsch, a “Duofold-red” Western lay amongst the weeds.  It cleaned up fairly well, although much of the plating on the clip band was gone: 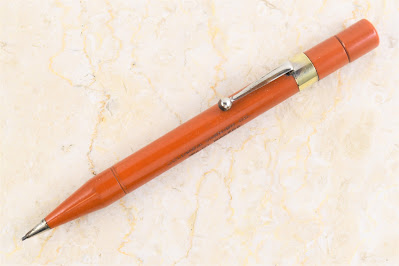 Just as was the case with the later jade examples in my previous article, this one also lacks a manufacturer’s imprint near the top.  The imprint on the side appears to be an ordinary advertiser’s imprint, for Columbia Varnish Company, “Paint Makers”: 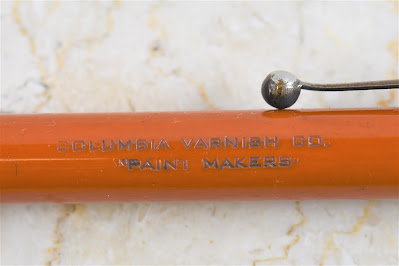 Columbia was located in southern California - a period glass paperweight indicates the company had offices in Fresno, Beverly Hills, and Los Angeles . . . hmmm, Los Angeles, just like Western.  The company was founded by Osmund Olsen, who according to his obituary, published in the North Hollywood Valley Times on August 9, 1954, was a Chicago native who moved to California and founded Columbia Varnish in 1915.  Help wanted ads from Columbia indicate the company’s plant in Los Angeles was located at 2460 E. 24th - not a match for either the old Dollarpoint location (1001 W. 16th) or where the Western Pencil Company was doing business when it was liquidated in 1938 (1821 E. Randolph).

I am so starved for more information about the Western Pencil Company that I’m tracking down an advertiser’s address just to be sure there’s no connection with the company.  No stone has been left unturned, so it’s time to file this one away . . . 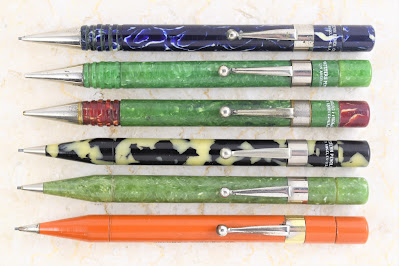