I knew I had written about this one at some point, but since I couldn’t identify it, it took forever to remember when . . . 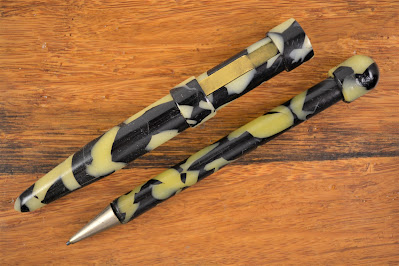 The article (Volume 4, page 12) was little more than a cry for help.  For six long years, it’s been lounging in the “worthy of inclusion, but I don’t know where” section at the museum.  In the time since, I repaired one of these in jade for Joe Nemecek – “fixed,” in the sense of rearranging the pieces so everything fit back together.  I also found the inside of a third example in cracked eggshell: 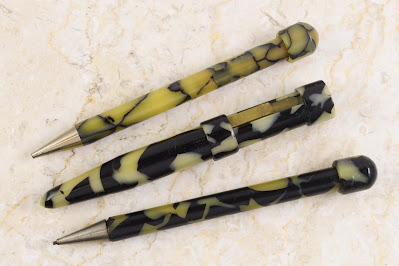 Thanks to the Krinke auction, I now know where this one fits in.  The opening bid of $100 for it had already been met online, so I took a “just in case” picture of it that turned out reasonably well: 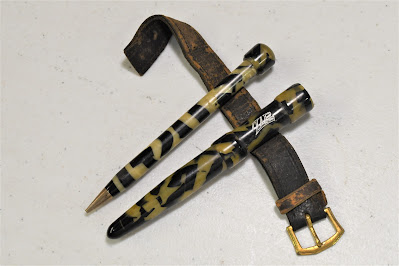 There’s an old saying that it only takes two idiots to set the market, and by the end of the auction I found myself the bigger idiot of the two.  My winning bid of $110 was much more than I wanted to pay for this one . . . chalk it up as six years of pent-up frustration begging for release and a follow up article here at the blog.  Besides, now I can get some better shots: 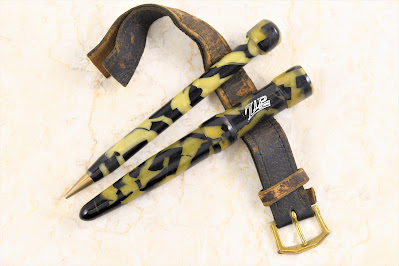 “Zip” it reads in clever script, with the alluring “Pat. Pend.” message tucked inside the lettering: 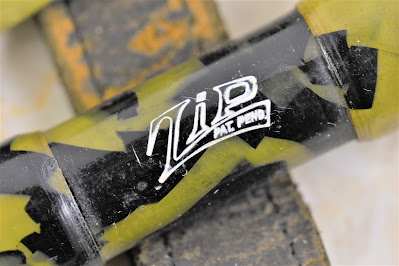 The bar on the barrel serves a dual function, adding just enough friction to hold the pencil in place as well as securing a wrist strap – sort of a concealed carry for writers, I suppose. 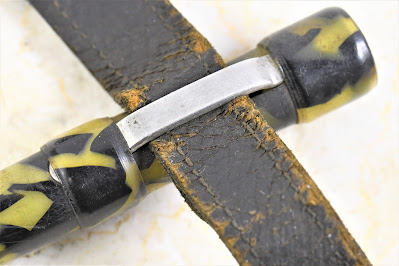 Nope . . . but I’ll bet all of the other examples of the Zip also read “Pat. Pend.,” because I did list a patent which would have prevented a zippy, pending patent application for the Zip from being granted: 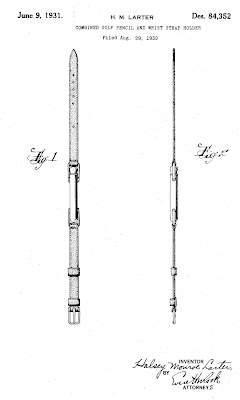 Halsey Monroe Larter filed a design patent application for a wrist mounted, sheathed pencil on August 29, 1930, and his application was granted on June 9, 1931 as Design Patent 84,352 (assigned, by the way, to William S. Hick’s Sons).  Larter, by the way, has appeared here at the blog before: he also patented that massive, multicolor Cartier pencil I wrote about some time ago (Volume 4, page 208).

The fact that Larter was awarded a design patent to protect the appearance, rather than a utility patent for his pencil’s function, is instructive.  Wrist straps securing writing instruments had been the subject of numerous utility patents in the 19th Century and were in the prior art, as were sheathed pencils.

I don’t think a utility patent application for the Zip was ever granted.  An examiner who pointed out that straps and sheathed pencils were both in the prior art, and the answer “but mine is turned sideways” likely wouldn’t differentiate it enough from what had already been done.

I did some poking around in my post-1945 patent database, and I found something even closer to the Zip: 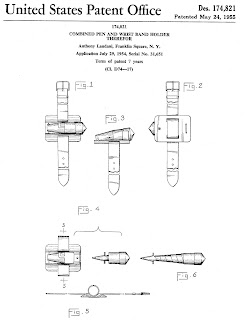 On May 24, 1955, Anthony Laudani was awarded a design patent 174,821 (protecting the appearance, as opposed to a utility patent for the function) for something very similar to the Zip – but note that the pencil telescopes to full length as it is drawn from the sheath, something that was patented by utility patents issued to both Edward Todd and William S. Hicks in the late 19th century (see “The Hicks Variation” in Volume 5, page 96).

Even with a brand name in hand, I haven’t been able to find anything to indicate the who, when, or where behind these pencils.  I’m just one step closer, so here’s to hoping someone will read this second, more targeted cry for help and fill in more details in what I am sure will be a great story.

While I remain unable to answer the question of who was behind the Zip, I did find the answer to another question: why only this example is imprinted with that cool Zip logo.  As I was thinking about that, I wondered whether they actually were imprinted . . . just very poorly.  After all, I probably would have been looking for plain text, and if this imprint were faint, it might be mistaken for random scratches on the barrel.  I looked more closely at my other example and sure enough: 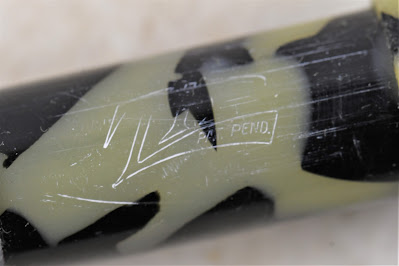 There it is – and I’ll bet Joe’s jade example has traces of zippiness, too!
Posted by Jon Veley at 3:45 AM

Email ThisBlogThis!Share to TwitterShare to FacebookShare to Pinterest
Labels: Zip