Never again will I forget that The Proclaimers were from Scotland after my visit there in 2018.  Late one night in Inverness, some of my fellow travelers and I went to the pub next door to our hotel – a very traditional Scottish pub with the improbable name of “Johnny Foxes.”  The live band was playing a surreal mix of music, and when John Denver’s “Take Me Home, Country Roads” was on tap, the entire audience was belting out “WEST VIRGINIA” like we’d all been there.

We were likely the only ones who actually had been.

The song ended.  The crowd was out of breath, sweating from jumping around, and a bit hoarse.  But then . . . then the quiet opening of The Proclaimers’ catchy 80's tune “I’m Gonna Be (500 Miles)” instantly re-energized the packed bar.  Things got exponentially sweatier as the audience crowded onto the dance floor, bouncing in unison to the beat and yelling out every word along with the band.  The singer’s lips were moving, but you couldn’t hear him.

In the weeks leading up to the Fred Krinke auction, as I browsed through the online catalog there was only one item that had me wondering to myself whether it would be worth the drive.  Never mind the long-overdue time off, a roadtrip, and the spectacle of the auction . . . would I drive 500 miles just for that one thing?

Da da da (da da da) . . . the earworm crawled into my head and got comfortable, escorting me all the way to Chicago and back.  I suppose I could have turned on the radio to clear it out, but I kind of liked it.  Da Da Da Dun Diddle Un Diddle Un Diddle Uh Da Da, I said out loud to myself, more than a few times I’m sure.

What had me havering all the way to Chicago was this one pencil.  I needed to see it in person and examine it, though, before I would bid serious money on it.  I satisfied myself that I would at the preview table, but I asked to take a few pictures of it before the auction, in case I didn’t win it: 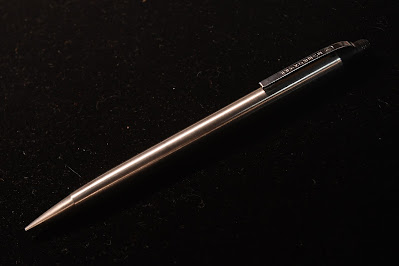 “Skyline Noir,” I called this raw image when I posted it on Facebook.   I took better “just in case” pictures of it, but I thought this one best captured perfectly my anticipation and suspense as the auction marched forward until we reached Lot 2278.  Would anyone else see what I was seeing?

Bidding was frenzied at the outset, steadily increasing in $10 increments . . . then $25 increments.  Fortunately it stopped, well short of my existential “what the hell am I doing” number, and all of my “just in case” shots were no longer needed.  Here it is in proper lighting, flanked by the other two items that were included in the lot: 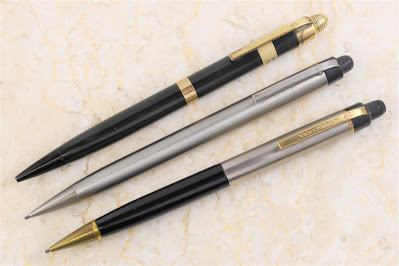 The green Eversharp Skyline, even with its mismatched black plastic nose, was an upgrade from the one in my collection with its price band - I swapped out the nose and added it to the collection. 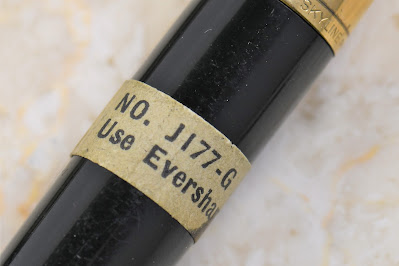 At the bottom is a Skyline with a stainless upper section and gold filled trim; an extremely rare piece in its own right (see Volume 4, page 193). 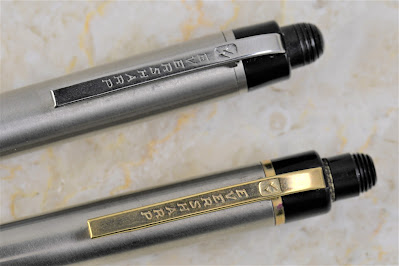 But that middle one . . . I have never seen or heard of a Skyline pencil with a full-length stainless steel barrel, and the reason I needed a hands-on examination of it was to reassure myself that this is indeed a factory piece, and not someone having a bit of fun.

I’ve expressed concern in the past about adding steel tubing to the top of an otherwise ordinary “presentation” Skyline (with a gold-filled top end), but I’ve long since dismissed that possibility as being very unlikely – those derbies are so difficult to remove and replace that it wouldn’t seem worth the effort, even if the result was worth ten or twenty times the value of a gold filled example.

But this . . . the stakes would be higher should it prove legitimate, but the feat of “making” one is also exponentially harder since the barrel material is tapered to fit the profile, rather than just straight tubing.  I looked for signs of a skilled metalworker having a bit of fun, and I found none.  Besides, the stainless clip assembly is found only on these stainless models – finding one, let alone successfully grafting it in place without breaking it – is next to impossible. 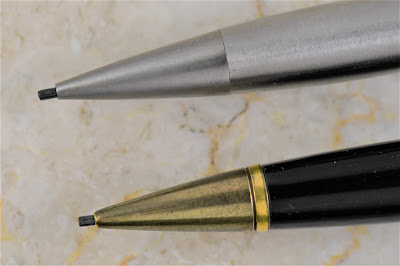 Unlike the other more typical examples that accompanied it, this has a brushed, almost satin nickel look to it – and note the absence of the typical groove you always see about a sixteenth of an inch from the end towards the barrel.

I removed the tip to be sure the steel sleeve was secured to its lining – if it slid off easily, I’d be concerned.  It doesn’t budge.

Does the word “prototype” fit?  I think not - by stickler standards (and we pen and pencil folk are loaded with sticklers), a prototype would be an evolutionary step in the development of a production piece.  To my knowledge, full stainless-barrel Skylines were never put into regular production . . . subject, of course, to the possibility that someone may someday stumble across a box of these bearing model number and price bands.

“Lunchbox special” doesn’t make much sense, either, since the stainless steel clip was used only on some known stainless models . . . there wouldn’t have been extras just laying around waiting for a bored worker to spend a bit of time off cobbling something together, and the tip appears to be a one-off.   No, I think this is better described as a shop piece or experimental model, and its one I’ll be going along with for the rest of my days: 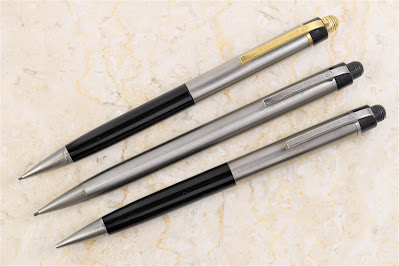 Of course, I still have a nagging feeling that this subcollection might still be incomplete.  Skyline pens exist with sterling silver caps rather than stainless, but I’ve never seen a sterling Skyline pencil.