Some of my Parker-fan friends rankle a little bit when I write about their beloved brand, because I don’t seem to have a lot of positive things to say about it.  I’m really not a Parker hater, and I’ve got enough examples in my collection to back up that statement.

The perception that I am anti-Parker, I believe, comes from the fact that I don’t treat Parker any different than when I’m writing about any other brand.  For example, whenever I write about a dumb idea that came from Wahl, nary a blip of discontent is expressed. People have long accepted that Wahl had dumb ideas long before I came along, so even if I’m writing about a new boner from the company, it’s accepted.

What I enjoy about writing this blog is writing about things that haven’t been written about or thought about before.  When it comes to Parker, a disproportionate amount of what has been written before sings the company’s praises, to the point that it is almost taboo to suggest the company made any mistakes.  It’s become almost like some prized show dog that is only expected to crap turds made of solid gold, so if I suggest that one doesn’t smell like daisies the devotees of the brand take almost a personal offense.  “Wounded bears,” I once referred to them . . . predictably, I suppose, that didn’t help.

Parker is as fascinating to me as every other brand, but posting an article just showing off a wide range of colors in a model you’ve already seen and admired for decades is . . . boring.  As with any other brand, Parker is more interesting when the company failed or flubbed, and the flubs haven’t been written about nearly as much as the company’s triumphs.  If I’m writing about Parker and I’m writing about something that hasn’t been written before, more often than with other brands I’m documenting a swing and a miss.  Remember, Babe Ruth not only dominated baseball with home runs – he also was a leader in the number of times he struck out.  To carry on the metaphor, perhaps Parker was always swinging for the fences.

I took some heat a few years ago when I wrote an article that suggested those crappy later Conklin pencils with washer clips might actually have been made by Parker (Volume 5, page 187 - that’s where the “wounded bear” comment comes from): 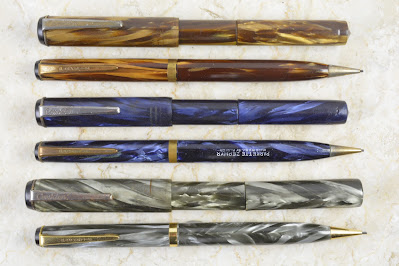 The pens shown in that picture are Conklins, and the pencils are Parker “Zephyrs.”

I made another Conklin-Parker connection when I showed off the insides of a similarly cringeworthy Conklin Minuteman pencil, sporting one of Parker’s distinctive (and patented) lead cartridges, though unmarked and painted red (Volume 5, page 165): 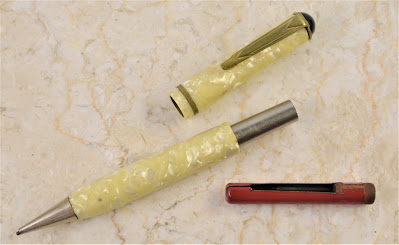 I hope the last two articles have softened up the Parker crowd, because I have to circle back around to that point in light of a recent find.  When I referred to every beginner’s “halycon” days, in which we all were excited by things we really shouldn’t have been excited about at the time, I don’t think I was alone when I thought there must be a connection between Parker and the Penman, a low-quality brand that often sported arrow clips – just like a Parker, I thought in those early days: 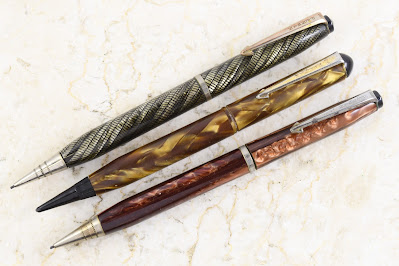 Incidentally, you’ll find the mosiac plastic that top example was made from on some later Conklins . . . that might just be a coincidence, and it isn’t the point of today’s story.  That middle one?  Yes, it is made from that same brown Parker Zephyr plastic, but that isn’t the point of today’s story, either – in the case of the Penman, these pencils are fundamentally different from anything Parker is known to have made.  The Penman, like so many other low-quality brands, is a cheap, nose-drive pencil, and the barrel halves unscrew to reveal an eraser stuck into the bushing that joins them.

When I last poked my beloved wounded bears out there, the consensus was that Parker must have sold off leftover plastic to the hucksters who made those terrible Conklin pens, never sullying its good name by associating itself with such a low-quality production.  As for the Conklin Minuteman with the Parker lead cartridge?  Crickets.

The Parker sloppy seconds argument seems to work just as well with the Penman as it does for those Conklin pens, and in fact might seem even stronger since the only things that brown one has in common with a Parker is the color of the plastic and a Duofold-style washer clip in the shape of an arrow, made long after Parker’s patent on the washer clip expired.

After all, Parker never made anything like the Penman, right?  I’ll just set a red pill here in front of you . . . whether you take it is up to you: 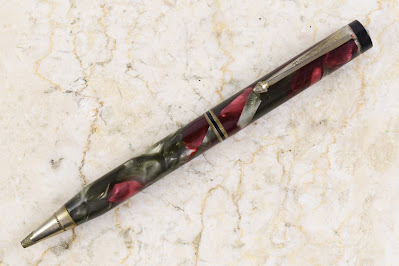 I was certain the online auctioneer was adding pizzaz to his or her listing, but yes . . . this one is clearly marked “Parker” on the clip: 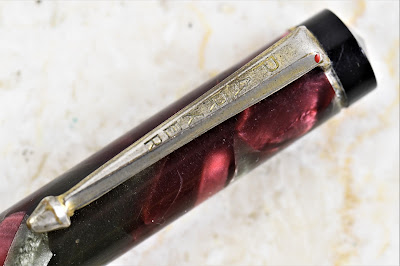 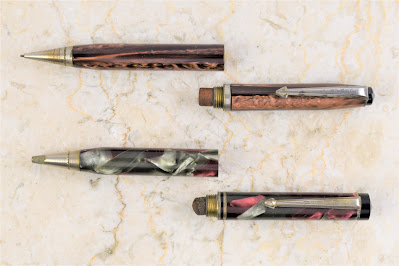 We can continue to make excuses for Parker, but the only excuse left is that some huckster made a blatantly suicidal decision to put Parker’s name on a low-budget imitation that wasn’t going to fool anyone.  If we deny Parker had anything to do with stuff like this, we are denying an increasing pile of evidence to the contrary:  now we have the same plastics, a rudimentary version of Parker’s patented lead cartridge, and now a Parker-marked pencil constructed the same way as nearly every low-budget production made during the 1940s.

I think this is an extremely rare glimpse behind Parker’s gilded curtain.  Like any other business, Parker had to find ways to survive.

I’d offer you a blue pill as an alternative to that red one, but I’m fresh out.

UPDATE: on the day this article posted, Trevis Young commented that he had found something similar, a later pen marked Mabie Todd with that same clip, in a lizard-skin plastic: 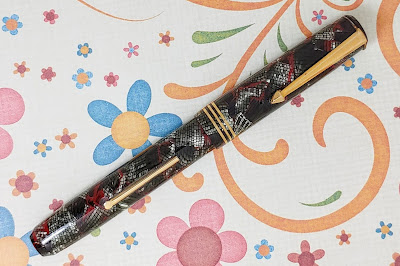 By chance, that very day I was spending some time researching the “Wilrite,” a third-tier brand from New York - and I had found an advertisement in the September 27, 1941 issue of the Pottstown, Pennsylvania Mercury that puts an exclamation point on the end of this article: 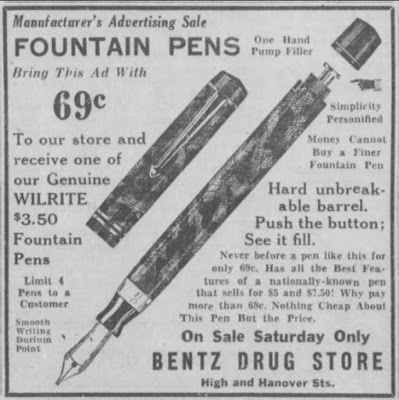 There’s the same plastic, same clip . . . and it’s a button-filler, “with all the Best Features of a nationally-known pen . . .” such as the button-filled Parker Duofold.  And last but not least, notice the nib illustrated, with that funny arc below the breather hole: 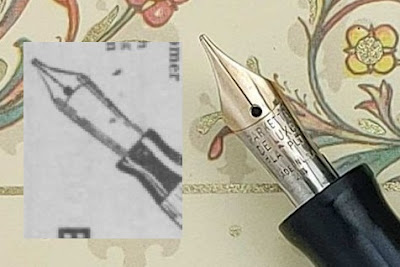 Just like a Parkette, but arched the opposite way.
Posted by Jon Veley at 3:45 AM