The Weirdness of Coral

One article in particular from Volume 6 prompted virulent discussion, and the general consensus that emerged from that debate was that my hypothesis was incorrect.  The tempest in our little teapot centered around the use and intent of the “X-Seal” on certain pens and pencils made by the Wahl Company: 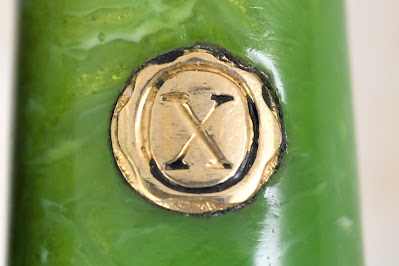 My theory in that article (Volume 6, page 110) was that the circle around the X is actually the letter “O,” and that might stand for “Oxford,” Wahl’s budget line.  That suggestion was not well received, as several devotees of the brand offered their own theories.

The front runner among these theories, offered by Syd Saperstein, was that these X-Seal pens and pencils were assembled from leftover parts in 1939, and those parts which had been drilled for double-check seals that had not yet been installed were filled with a different seal that would not commit Wahl to honor a factory warranty.   He further suggested that if it truly was the letter “O” surrounding an X, it could equally mean XO for “closeout,” rather than OX for “Oxford.”

Everyone agrees there is no documentary evidence to prove what Wahl was thinking when these X-Seals were implemented, and since no one alive today was working the factory floor when it happened, there is no surviving first-hand account of what was intended.

In fact, there’s no evidence that Wahl “meant” anything, or that these X-Seal items were marketed consistently in any unified way – given the probability that they were assembled from leftover parts from discontinued models, any marketing plan might have resembled a garage sale more than a slick campaign.

The argument, therefore, concerned which unsubstantiated theory had the best internal consistency.  My suggestion, “OX for Oxford,” took a beating because known X-Seal examples are marked Eversharp, not Oxford.  That is, the X-Seal examples known at the time I wrote the article . . . 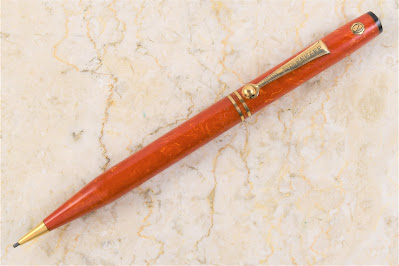 These no longer slip quietly under the radar when they appear.  I paid handsomely for this one, since the price included both a beautiful pencil and a shot at redemption.  Here it is, alongside the jade example from my previous article: 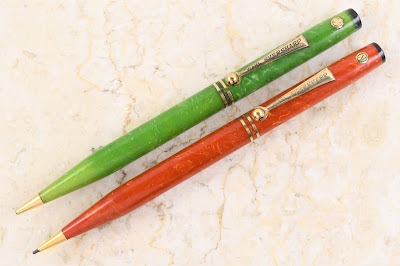 As is the case with the other example, this one is also built around a flattop Eversharp fitted with an Equipoised mechanism, originally introduced just prior to the rollout of the Doric line in 1931 - probably in 1930.  The top would originally have had a groove into which a gold band would separate the colored plastic from the black end, which was voided by machining down the top end slightly: 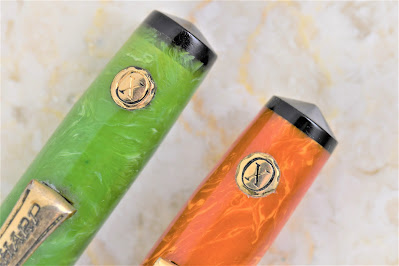 Also like the jade example, this one sports the slightly longer and later roller clip, marked “Wahl Eversharp”: 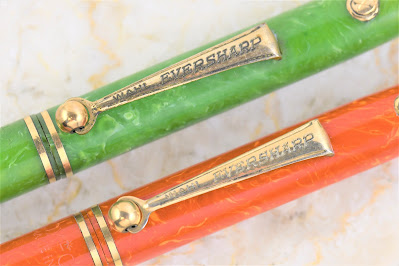 Then things get really interesting.  The jade example is imprinted simply with “Made in USA” on the lower barrel: 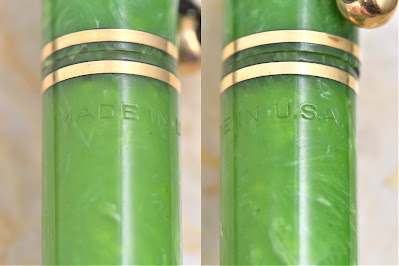 This coral example, however, has an imprint I haven’t seen on any other Eversharp – “OXFORD / Made in USA”: 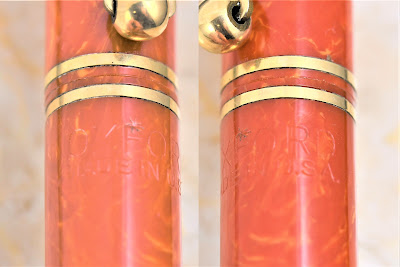 I’m not saying that ALL X-Seals were marketed as Oxfords, but here is the hard, undeniable proof that at least this one was.  It fits as nicely into my theory as that last missing jigsaw puzzle piece that turns up under the couch months after you were trying to piece things together.  Here it is, next to the Oxford-clip coral pencil that caused me to come up with that theory in the first place: 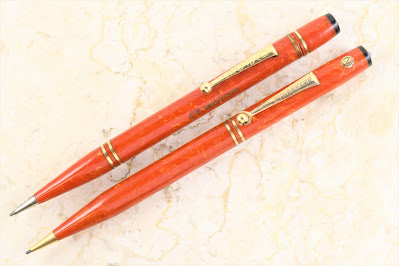 Weirdness seems to coalesce primarily around the coral-colored examples in this series.  Here’s a family photo of all my coral “Tempoint-styled” pencils (or “Signature style, or whatever you prefer to call them): 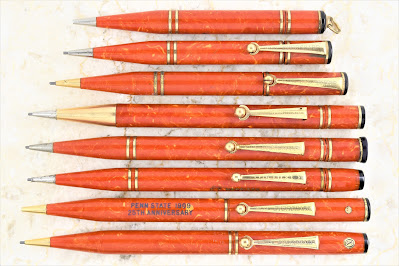 This includes the “normal” ones - the top three are part of the regular line, although the longer, military-clip examples are harder to find.  The fourth one is an undocumented variant, which marries a 1924-or-so long nose onto what is otherwise the same pencil as the regular, full-length example right below it (what looks like a flared top end is actually one of the original price wafers which was snapped onto the top.

(For the full story on the long-nose coral pencil, see Volume 3, page 14.  Those price wafers were detailed in a pair of early article posted here, now in Volume 1, pages 93 and 135.)

Next is the Oxford, and you can see how just a few modifications to a leftover from the regular line created a very different-looking pencil.

The bottom two show how the later, Equipoised-mechanism incarnation of this series was modified to create my Oxford “X-seal” pencil.  The flattop turned up at the Chicago show years ago, and its commemorative imprint doesn’t detract from its appearance to me, since it adds a bit more to this story: 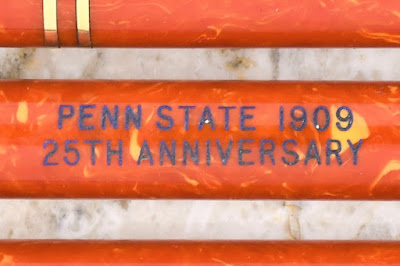 The 25th Anniversary of Penn State’s Class of ‘09 would have been in 1934, so Wahl apparently had a supply of completed coral flattop pencils left over long after the line was formally discontinued in 1930. Perhaps the streamlining of the top end and addition of X-seals occurred after this pencil was imprinted and sold in 1934, using unfinished barrels lacking their top band.  That would be consistent with Syd’s theory that the X-seal pencils were hastily assembled from leftover parts in 1939.

Maybe we are all right.  Perhaps Wahl was unwilling to commit to warranting pencils made from parts that were 10 years old, so the “X” was just something different, more artful than just drilling a hole in a double-check seal to make it clear there was no factory warranty.  Perhaps if it is an O rather than just a circle, it was intended at some point to mean XO for closeout, although as of this writing no documentary evidence supports that.

Perhaps, as my pencil strongly suggests, Wahl associated these closeouts with its low-budget Oxford line as a less clumsy, more elegant solution to both of these.  At least we now know Wahl did so once.

I think Wahl might have done all of the above, and maybe I was just a little bit right, too.