The Tail that Wagged the Dog

After an eight-hour drive, it only took me an hour or so to preview the auction lots I specifically came to see at the Krinke auction – the two pencils I needed to preview (the stainless Eversharp Skyline as well as another one I’ll tell you about later), plus a dozen or so other things my friends wanted me to look over before they decided how much to bid for them.

Oh, but there were thousands of other things there to look at, too, and this was the closest thing to a pen show I had been able to experience for a year . . . it would be such a pity not to geek out over the rest of the auction fare, just for kicks.  So I kicked.

One curious lot that I didn’t think I needed was this Eversharp/Wahl Pen store display: 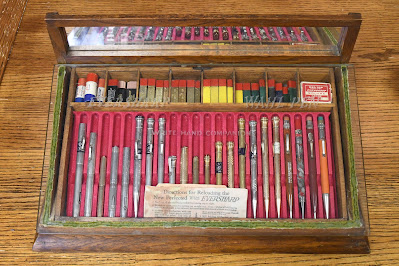 “Curious,” I thought, in how it was being offered for sale.  The display had been in Fred Krinke’s Fountain Pen Shop since it opened in 1922, according to legend, and it was being sold as one lot, complete with its contents.  However, there was no reason to include the what was in the box – yes, it was fully stocked with fountain pens, pencils, and leads, but this clearly wasn’t the original stock. 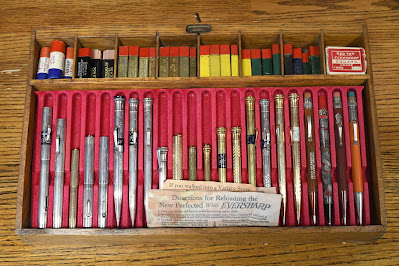 Those red, white and blue lead containers in the upper left cubby hole are V-Mail leads from World War II, and the plastic lead containers in the next cubicle are from the late 1930s.  Similarly, the pens and pencils span at least a decade . . . the only thing these items had in common was that Fred Krinke thought they all looked nice together in this case.  As for the leads . . . well, I’ve got a few of those to spare already.

From what I could tell online, I didn’t see anything I’d want to add to my collection . . . just inventory for the next pen show, whenever that happens.  A closer examination confirmed that assessment . . . with the exception of just one item: 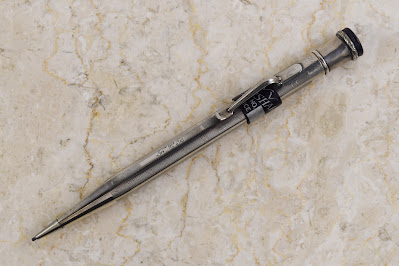 If it looks a little bit fat, good eye – this is a rare oversized Eversharp metal pencil.  If you noticed the pattern – “wave,” the company called it – bonus points.

If you noticed that it’s an oversized Eversharp metal pencil with the wave pattern . . . well, you must read this blog a lot.  I’ve found just a handful of these oversized pencils over the years.  Some take .075" lead, some take standard .046" lead, but all of the ones I have found have either plain metal barrels or the “Grecian Border” pattern: 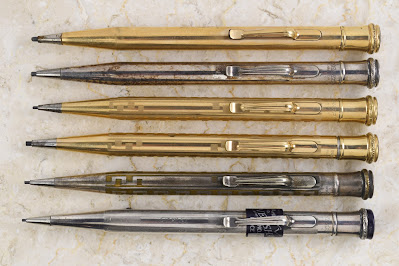 The last time I visited the subject of the oversized metal Eversharp (Volume 4, page 96), I mentioned that the gold filled example is illustrated in the 1928 Wahl catalog but the Oxidized Grecian Border (silver filled over brass, with the brass exposed by the chasing) was not.  That’s technically correct, but I should have been more clear – 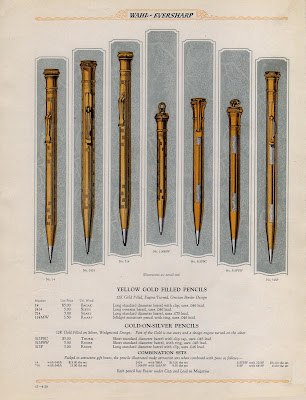 The catalog shows the gold filled oversized pencil, second from left, with the grecian border pattern, designated model J414 (the regular full-length pencil to its left was model 14, and I’m betting J means oversize, and 4 means .046" lead).  Immediately to the right of the oversized is the standard diameter model, made to accommodate .075" lead and designated model 714 (the prefix “7" must mean .075" lead), so I’d bet that an oversized Grecian Border pencil with .075" lead would be model J714.  Oversized pencils with plain barrels are not found in the 1928 catalog – neither in silver plate nor gold filled.

The wave pattern, however, isn’t cataloged in any size at all in 1928.  Unfortunately, the PCA library doesn’t include catalogs for 1927 or 1926; a low-quality copy of a 1926 dealer’s flyer shows a “New Big Barrel, Big Lead Eversharp,” but it looks like that is the typical mottled hard rubber or jade celluloid model, not an all-metal one.  The 1925 catalog illustrates wave pencils, but only in ringtop and standard diameter clip models: 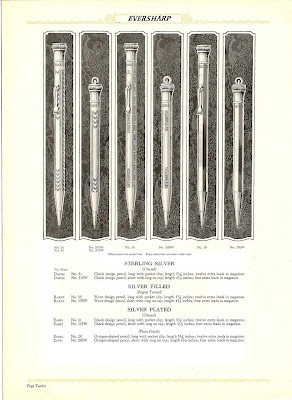 According to this, the standard issue wave pencil was model 35, which would make this oversized example a model J435 if Eversharp was consistent (I know that’s a mighty big if – we’ll see if a catalog ever shows up to substantiate this).   Here’s the oversized model shown next to the standard issue model 35, for comparison: 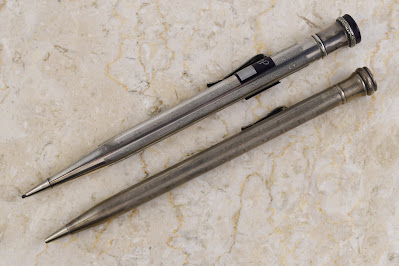 Whatever it was called, I had to have it if possible . . . but it was the only item in that case that interested me.  Even the case itself didn’t particularly interest me, since I have an entire double printer’s cabinet which houses my “world’s largest” Eversharp collection, with still a third of the drawers vacant: 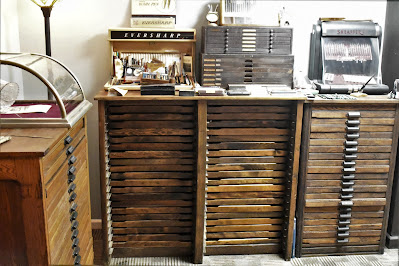 I messaged Trevis Young, a metal Wahl pen fanatic, to see how much he might pitch in for the pens if I gave chase during the bidding, then sat on pins and needles.  The auctioneer’s only other pause in the bidding to hype up an item was for this lot, but his pitch focused on the fact that this case had been in Fred’s shop, allegedly since it was founded in 1922, and that it was offered intact, just as it had been left until this auction.  No attention was drawn to the items inside.

The opening bid was $500.00, and they had that bid from the online peanut gallery.  I bid $550.00, and for a moment bidding stalled . . . long enough that Trevis told me later he nearly jumped in, just in case I was sleeping at the switch.  Just before the hammer fell, someone else jumped in, but at the end of the day I was the highest bid, at $950.00.

The price was mighty steep for one pencil and a case I didn’t really need, but Trevis was true to his word and he took a few items to help defray some of the cost.  Back in my hotel room, I went through what was in the case, and when I took out my prized new pencil, I found something I didn’t notice during the preview: 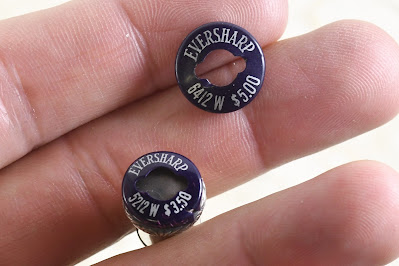 The pencil is fitted with one of the price “wafers” Eversharp used in the late 1920s, and unlike most of these the lettering isn’t worn at all.  And . . . a second pristine price wafer was in one of those cubby holes with the leads!

But there’s a problem.  The pencil also has a price band, with no model number, and neither of the wafers has a model number matching what I suspect the number would be for the pencil.  Also, those holes with side cutouts were generally used on ringtop models, so they slide over the ring to secure on the barrel end, and the spare one is bigger than the pencil’s diameter.

I hit the books looking for any reference to these numbers, and I found them in the 1929 catalog.  As I suspected, the wafer on my pencil was added later, just for a bit of NOS goodness, or maybe just as a convenient place to keep it.  Model 5212w designated a ringtop pen in jade green (“w” in Eversharpese meant “with ring”): 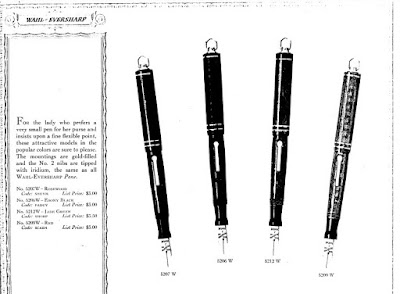 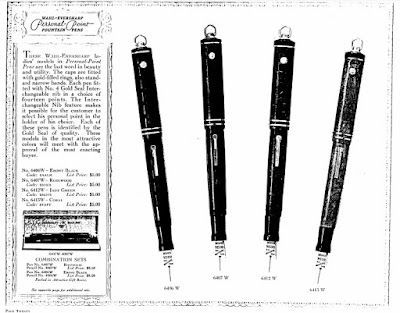 That was a bit disappointing, but not a total loss – I’m confident there’s an Eversharp collector or two out there who needs these rings to add some correct NOS flavor to these exact pens, and that will also help offset the cost!

My apologies to any underbidders who wanted to see and handle the contents of this case intact, before they are separated to the four winds into my hands, Trevis, and other collectors.  As a consolation, Trevis and I agreed that before I shipped him his pens, I’d take the time to shoot better pictures of what was included, exactly as it came to me.  First up are the pens: 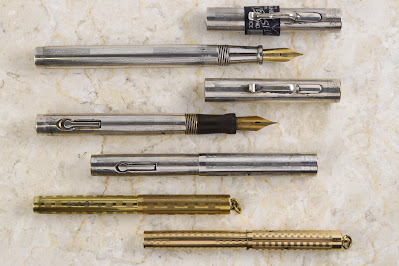 The top example has interesting flourishes on either side of the imprint that I haven’t seen before: 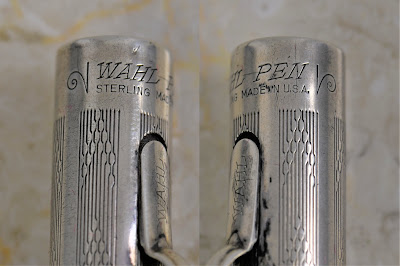 Two of the ringtops are earlier models, carrying over design features from the Boston Fountain Pen Company, which Wahl acquired in 1917: 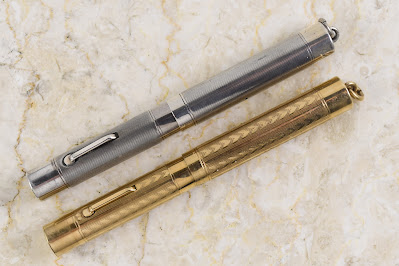 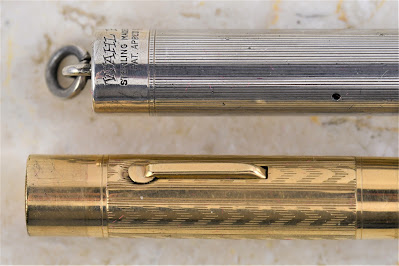 Next are some Eversharp metal pencils, including two post-1924 model in “ripple” with the matching engraving on the works inside: 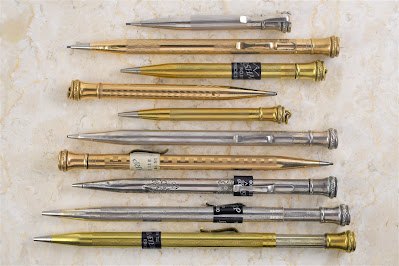 The second one from the bottom also had another neat feature on top: 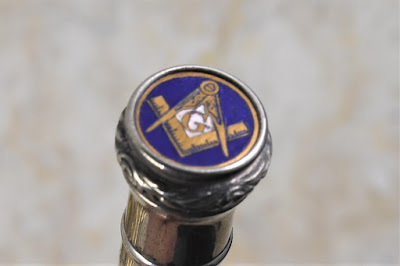 An instruction sheet found in the case would have been correct for those post-1924 models, as it illustrates the “New, Perfected Wahl Eversharp.” 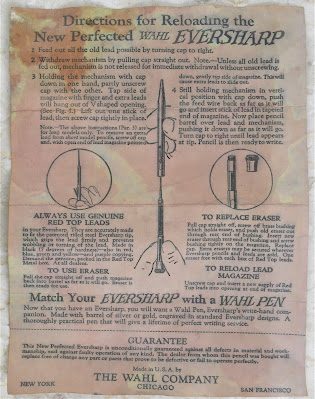 The last four pencils in the case are relatively unremarkable: 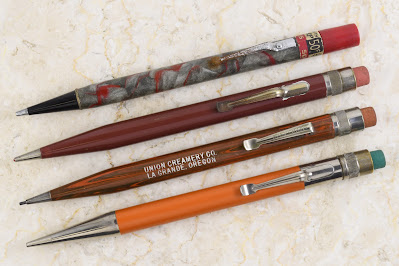 However, the one with the price banded is an upgrade to the one I have, and I’ll also keep that enamel-over-aluminum pencil in an unusual color I haven’t seen before, something close to Parker’s “Pompeiian.”

As for the case itself . . . well, now that it’s here, I have put it to good use.  I’ve long thought it a shame to confine my early Heath-clip Ever Sharp pencils to that printer’s cabinet, and this cabinet is early – not as early as the Heath-clip pencils of 1914-1915, but note that the “S” in Eversharp is a bit bigger: 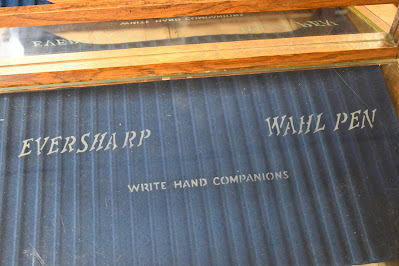 That is only found on very early Wahl stuff – after the Boston pen acquisition at the beginning of 1917, but perhaps a transitional step from “Ever Sharp” (two words) to the truncated Eversharp of 1918.

Nevertheless, my earliest and most prized Ever Sharp pencils now reside comfortably in Fred Krinke’s case.  I’ve kept the leads in there for now, as a nod to his legacy, as well as the small slip of paper I found inside: 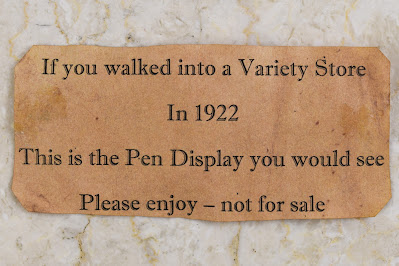 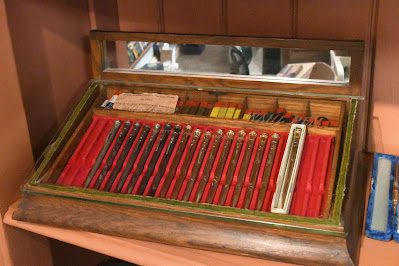 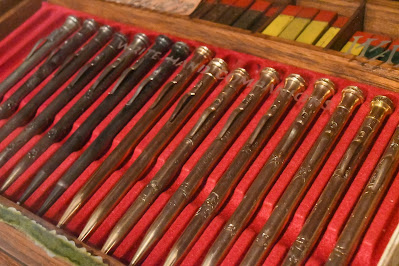 The Krinke Auction you attended sounded neat, but fell on a weekend I was working. $950 sounds like a good price- for the Original Ephemera you gained and the Quality/Historical value of the said items though nice to add to a 'collection' will be preserved for years to come at your 'museum'!
I'm glad you continue to share the LeadHeadPencil Blog and continue to document your findings in the many books you've authored and researched!

Those "flourishes" are each half of a stylized Wahl "W", which is also commonly seen on the Wahl-made warranted nibs used in the company's subbrand models.