“Auction of a Lifetime”

I wasn’t planning to attend the auction of Fred Krinke’s collection at first.  Fred was a well-known pillar in our pen community, the third-generation proprietor of The Fountain Pen Shop in Los Angeles, California.  Since I have never made it to a Los Angeles show, I didn’t know Fred well – although I think I might have met him at one of the DC pen shows back in the day.  Mostly, I knew Fred by reputation as the generous donor who shared his collection of vintage catalogs with the Pen Collectors of America (these would later form the backbone of the PCA’s library).

It was billed as “The Auction of a Lifetime,” but when the catalog was finally made available just a couple weeks before the auction started, nobody was sure whose lifetime we were talking about . . . many lots were parts and damaged pieces, and the descriptions were disconcerting: one item, for example, was described as having a cracked and warped barrel, but concluded with “overall excellent condition.”

I wondered, as did many of my friends, in what dictionary this curious definition of “overall excellent condition” might be found.

Then there’s this nagging, stupid virus thing . . . when I initially suggested I might make the drive, Janet pointed out that after being so careful and so concerned for so long, it didn’t make sense to put myself in a situation where I might be exposed.  In early February, that logic made sense . . . after all, with the vaccine coming out, things will be back to normal soon and there will be plenty of time for pen shows.

By late February, I was no longer buying into that logic.  I had been doing what my government has told me to do like a good boy for a year, and I hadn’t missed a single day of work since the Baltimore Show (which started, ironically, exactly one year before Day Two of the Krinke auction).  Vaccines had arrived, but my government has decided I wouldn’t be important enough to get one in the foreseeable future.  The new moron who replaced the old moron in our Nation’s highest office was so effective in his promise to employ the Defense Production Act that if he had been president during World War II we’d all be speaking German or Japanese by now.

I decided if I was going to be unvaccinated sitting duck,  and that wasn’t going to change any time soon, I might as well be enjoying myself while I inevitably catch the bug.  And I really, really, REALLY needed a day off.

Several friends had been sending me messages to ask if I would be attending the auction.  Just like me, they wanted “boots on the ground” at the auction to examine the items that interested them firsthand - plus, the buyers’ premium was only 15% if you were there in person, as opposed to (gulp) 23% if you bid online.  As for the technology . . . nobody trusted it completely, and it’s impossible to react as quickly as a live bidder can. 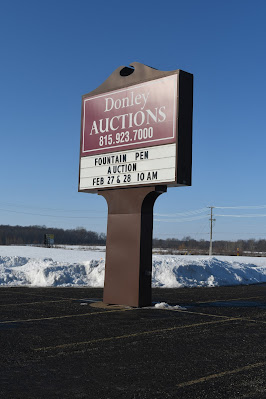 Previewing an auction in person is a must if you are planning to bid.  There was just one thing I absolutely needed to see in person because I wanted to be sure . . . I’ll get to that one tomorrow.  But since I was there (and I had plenty of pent-up pencil deprivation, without any pen shows in a year), I spent a couple hours of quality handling-the-goodies time. 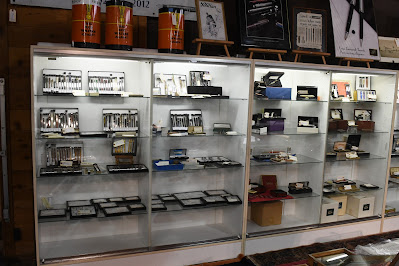 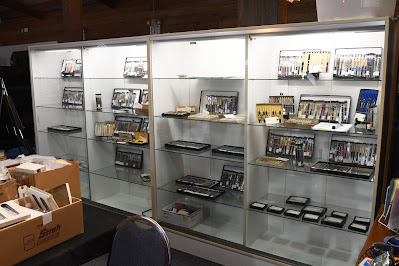 And I noticed things I hadn’t noticed before.

Evening was upon me in no time, and after a nice dinner at the steakhouse across the parking lot from the hotel, I sat outside and enjoyed a cigar.  It felt almost like a pen show, relaxing after a few hours seeing friends and geeking out a bit, with the anticipation of what tomorrow would bring: 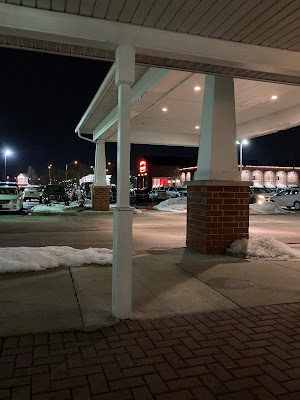 Maybe, I thought, if the bug scared away the in-person crowd I’d have the opportunity to take home more than just the one thing that brought me there.  The next day saw just a few live bidders, three of whom I knew: Roger Wooten was there to help the organizers with the auction.  Brian Anderson and Eric Magnuson were there, too. 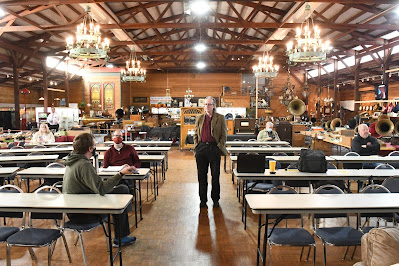 By the end of the day, it was location, location, location . . . the two signature lots from the first day of the auction were spectacular but extremely cumbersome to ship safely.  A guy who was there in person, with a big truck to get them home in one piece, and for no more than the cost than the gas he would have bought anyway, was successful: 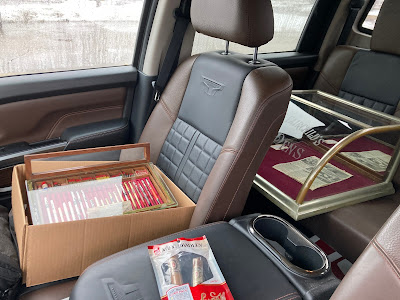 Nothing really interested me that was up for bids on the second day of the auction, so Sunday morning I headed back to Leadquarters to spread out the day’s haul . . . 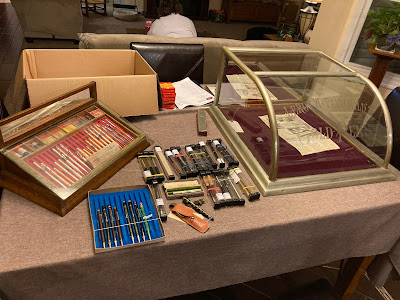 . . . and this doesn’t include the things I bid on for four of my friends!

When I closed out Volume 6, I expressed my hopes that if/when I ever started posting articles here again, it would motivated by the objects of my affection themselves rather than the doomsday-driven need to connect with others because of the bug.  I’ve been quietly writing articles here in the time since, waiting for a catalyst to trigger the avalanche.

It's nice that your blog is active again--I missed it.

Big auctions are quite a rarity and in some cases are important milestones relating to certain brands and rare pieces. Although I guess most collections get well picked through before the auction stage is confirmed!
However many remember the Bouras auction that kicked off the 1990s and it is interesting to try and list the key auctions that have taken place in the last 30 years - some of them perhaps at an individual pen show.
Documenting the auction detail and the hammer prices would be an interesting record but they do not always tell you much about the real condition and circumstances of sale. One requires a reliable individuals observations and we get that from Jon- Many thanks. I wish I could have been there if only for the atmosphere- even if it was very different!