An Indelible Mark on History

It isn’t like me to make a cavalier remark like “sheathed pencils have been done before” without showing you where it was done before, but if I did in the course of yesterday’s article, that tiny diversion would have taken me so far down a side track that switching back would have been a challenge.

And . . . that comment gave me a nice segue to write about something that has long fascinated me, yet arguably falls outside the scope of this blog.  Were Clark’s Indelible Pencils “mechanical?”  I suppose not: 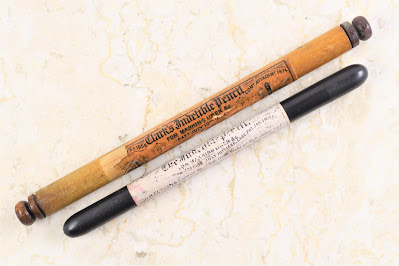 Unless, of course, you count pulling a sheathed wood pencil from a wood case as a mechanical action.  Add a wrist strap, and you have a wooden Zip: 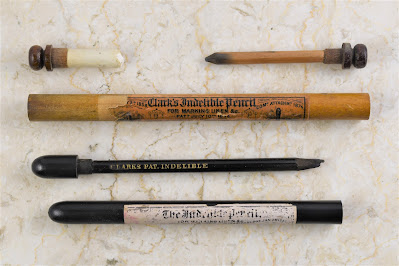 The two examples that have come my way are not in pristine condition, but given that they were intended to be consumed and thrown away, the fact that any have survived at all with their paper labels is impressive: 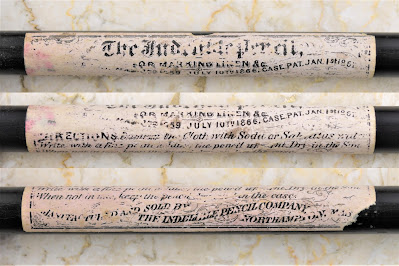 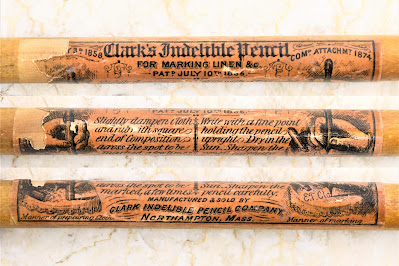 It is a tribute to the large number that was made, increasing the odds that a few would still be around in reasonably good condition – they don’t come along every day, but maybe very other day or so.

According to the better of these two labels, the Clark Indelible Pencil Company was located in Northampton, Massachusetts.  A broadside I ran across somewhere indicated that during the Civil War, Herman K. Zahm was Clark’s “sole agent for the New England states.” 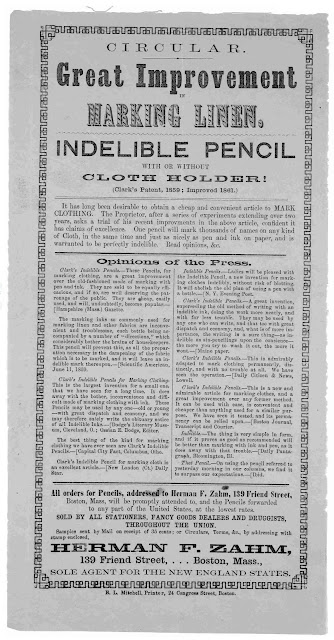 Although the broadside is undated, there’s subtle details which make it clear Clark’s pencils were not being exported to the rebellious South at the time it was printed.  It says the pencils were available “through the Union” and also identifies “Clark’s Patent, 1859; Improved 1861":

The 1861 patent date here is interesting, because all the examples of these I have seen bear an 1866 patent date, after hostilities ended.  The better of my two examples has three partial dates: 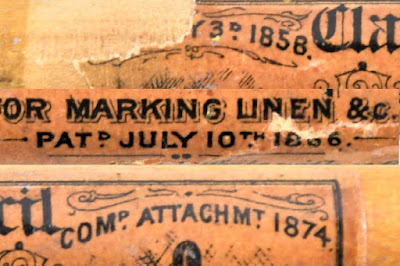 Triple crap.  May 3, 1858 fell on a Monday, not on a Tuesday when all American patents were issued.  Either the date is wrong, or that isn’t an American patent.  With a dead end there, time to look for “Clark’s Patent 1859" referred to in the broadside:

That’s more like it.  Edson P. Clark of Holyoke, Massachusetts was awarded patent number 24,195 on May 31, 1859 for a new composition of pencil lead, which contained silver nitrate as an additive.  Since the patent was for the composition rather than the pencil itself, there’s no illustration of the pencil itself: 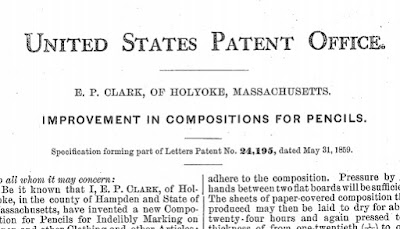 Hmm.... May 31, 1859 is just a bit off from that May 3, 1858 date seen on many Clark’s pencils.   Was that a typo?  If so, it was a consistent and frequent typo, since it appears on nearly all of these.  Maybe it was a bit of sleight of hand, giving the appearance of being issued a year earlier than it really was?  No, nobody ever did that back in the day . . .  OK, my sarcasm is showing.

Until a foreign patent issued May 3, 1858 turns up, I’m guessing Clark wanted an extra year of seniority, and once the little white lie was out there, he wasn’t able to take it back gracefully. 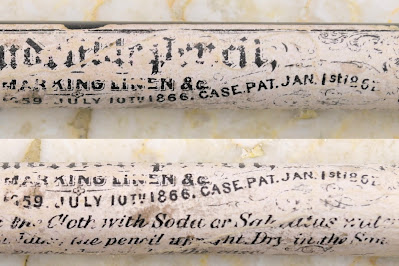 There it is, in American Writing Instrument Patents 1799-1910.  I would have found it even if I didn’t have a cheat sheet from a better example:

Again, this patent covered only the composition of the lead (this time, adding both gypsum and silver nitrate to the graphite), so there aren’t any pictures of the pencils themselves: 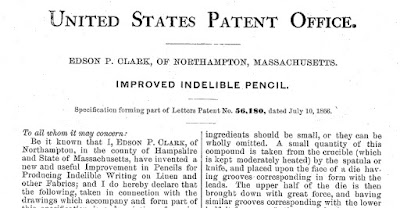 However, note that my lesser example refers to “Case Pat. Jany 1 1867.”  Yep, it’s listed in the book – the date refers to patent number 60,885.  It was issued to William B. Hale and assigned to the “Northampton Indelible Pencil Company”: 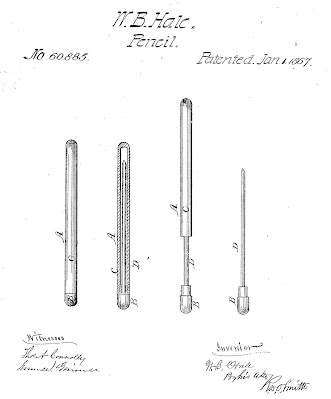 There’s the Clark’s Indelible, in sheathed pencil form – and that is the bottom of the rabbit hole from yesterday’s article with a sign pointing at it that read “enter here to see where sheathed pencils have been done before.”

The last date provided on the Clark label is that curious “Comp. Attachmt. 1874.”  My patent book include a pencil attachment, issued in 1874 to a guy in the area: Levi L. Tower of Boston received patent 155,272 on September 22, 1874 for an eraser attachment that doubled as a point protector: 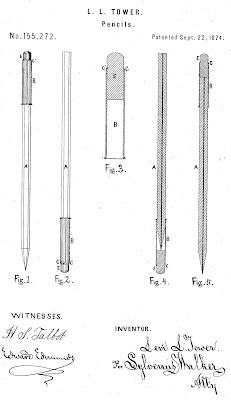 I think the Clark Indelible Pencil could be had with this optional, Tower patented attachment.  The better of my two labels illustrates the closed pencil being used to dampen surfaces before writing with the pencil with the “square end of Composition,” suggesting the label is short for “Composition Attachment”: 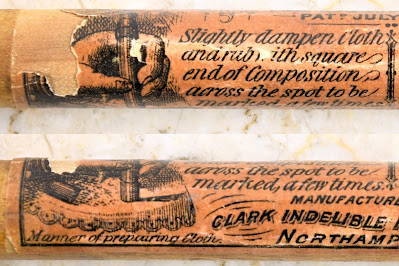 Since the pencil case lacks any square-ended composition, this must have been something sold separately.  Although “Composition” might equally refer to the eraser-like substance attached to the knob at the other end of these shown earlier, the label clearly shows a closed pencil case with something on the end of it being used to rub the surface.

If there was an attachment for Clark’s Indelible Pencil, it might not have been the only product sold separately in the Clark’s Indelible family of products.  In October, 1867, The Uniform Trade List Circular published a list of “Entertaining Games” offered by D.B. Brooks & Brother in Boston: 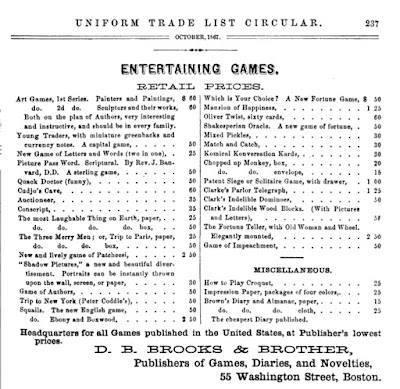 Here kid – go play with some blocks covered in silver nitrate.  Ah, the good old days; what didn’t kill us apparently made us stronger.
Posted by Jon Veley at 3:45 AM

Oh!, silver nitrate won’t kill you. But just like bleach, you shouldn’t take it internally. Silver nitrate is used as eye drops for newborns to prevent transmission of gonorrhea from the mother and to cauterize nosebleeds.