One school of thought, when you encounter wadded-up paperwork that’s more than 100 years old, is that it should be left alone.  “Do no harm” is a common sentiment when it comes to messing with things that might be lost forever if disturbed.

I interpret “do no harm” from a different perspective.  If a piece of paper is disintegrating from age anyway, I feel the only benefit to leaving it alone is to enjoy a fading glimpse of how a box’s contents looked a century ago.  Fading, and inevitably nearing its end.

That, in my opinion, is its own sort of harm.  Given a choice, I think there is more value in preserving the information a piece of paper can pass on than in the paper itself.  Document, document, document is my mantra – if a piece of paper is falling apart anyway, I think it is best that it disintegrate while giving its last full measure to pass on whatever message it contains.

With the contents of this Hoge box, this was going to be a challenge.  As I mentioned yesterday, no amount of care during previewing could prevent more bits of the paperwork from breaking off like snow.  It had at best one last unfolding to see what it said. Here is the paperwork as it appeared in the catalog: 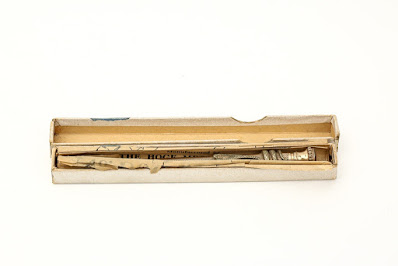 I keep letter-sized, PVC-free document holders on hand for just this purpose, but wrangling old pages into them to flatten them out is always difficult, particularly when they are deteriorated this badly.  I hold the open end of the plastic frame open, then starting from the bottom of the paper, I slide it in as far as possible, working little folds out as I go.  This paper was nearly torn in half and much of the top was already gone, but after ten or so tense minutes (taking nary a breath), I was finally able to exhale, as it flattened out enough to reveal its contents: 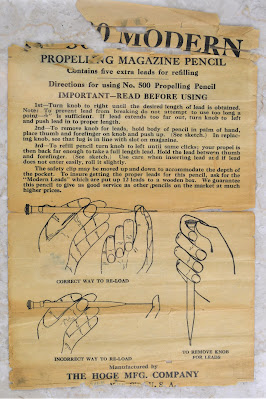 The paperwork, like the box, had nothing to do with the Pearce pencil around which it was wrapped . . . but fortunately, it had everything to do with the box.  “Modern” in this context had nothing whatsoever to do with A.A. Waterman, which at one point adopted the name “Modern Pen Company” (the full story on that clarification appeared here in Volume 3, page 169).

As illustrated in that previous article, Hoge’s “No. 500 Modern” propelling pencils were introduced by the company in Geyer’s Stationer on July 15, 1920: 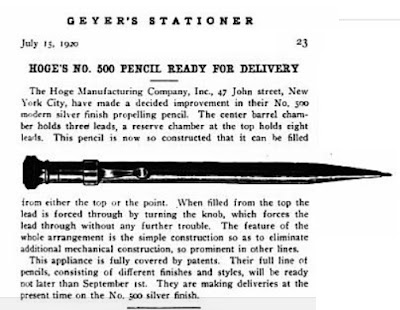 The announcement indicated that as of that writing, Hoge was already “making deliveries” of the No. 500 in silver finish, but that “Their full line of pencils, consisting of different finishes and styles, will be ready not later than September 1st.”

I’ve never seen a Hoge No. 500 Modern in anything other than a plain, nickel plated barrel, nor in different sizes or configurations from what is shown.

As for the paperwork - now that it is in its protective case, it’s possible to remove it but I am doubtful I could do it in one piece.  It has now served its purpose - communicating a little information, now to be preserved electronically as well as in books.  It now has legs and will still convey its message long after I’m gone, for much longer than it would had I left in that box to decay into oblivion. 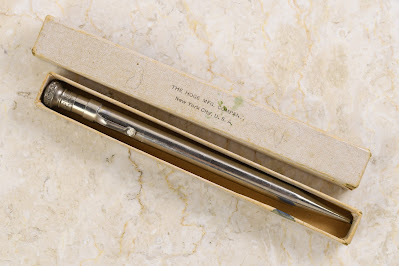 And it now rests comfortably in the “M” section on the wall o’ pencils, a carryover from the days when I wasn’t sure where to put the “Modern” other than alphabetized by the name on it: 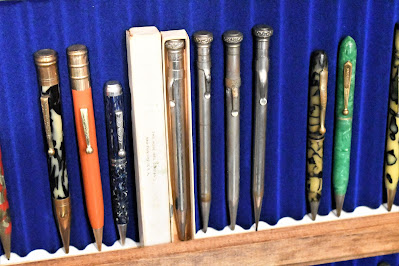 Maybe I should move it to the “H” section for Hoge, or at least down to the “P” section alongside its better known Hoge product, the “Pal” line of pencils.

Hmmm... that reminds me that there’s something else I need to show you ...