The Rex Manufacturing Company has been a long-running fascination of mine.  The company supplied so many pen manufacturers, and had its hand in so many unmarked pencils from the early 1920s, that I’ve never understood how the company remained virtually unknown until I started writing about it.  It’s like an elephant hiding behind a telephone pole.

Nearly everything the company made was marked only with the names of the customers for which they were made, and only one brand name – “Ye Wm. Penn” – belonged to Rex (see Volume 5, page 77).

That’s why I make an extra effort to bring home pencils that are actually marked with the Rex name.  Extra effort was definitely required in the case of this one: 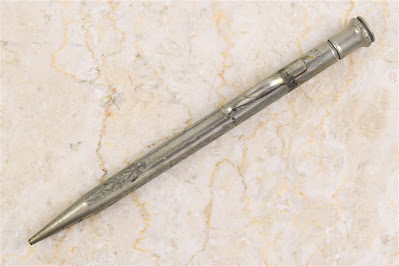 It came to me by way of Loyal Knight Eric Magnuson, and it used to be much easier for Eric and me to swap things back in forth.  He used to live here in the Columbus area, so he’d stop by the museum every so often to chat a bit, play with some pencils and offload a few that I just had to have.  Now that Eric has graduated from Ohio State, he’s moved to the Chicago area for his new job, so it’s been some time since we’ve seen each other.

After he moved, Eric asked if I’d be interested in a big, bulky Eversharp store display, still fully stocked with 1940s-era leads.   I wryly noted that I was probably running a little low and could use some more leads (for those who don’t know, I run the Legendary Lead Company, with a stock of pencil leads that will last us all for decades), but the more pertinent question was how the heck he planned to get it to me if it was so big, bulky and heavy.

No worries, he said.  His parents still lived in Columbus and would be visiting him shortly, and he’d happily volunteer them to schlepp this albatross back home with them, where I could pick it up locally.  And, while we were at it, a few pencils could ride along as stowaways.

Eric is one of the good ones - he’s keenly attentive to the things he knows his friends like, and when he knows he’s got something a cult follower of a brand will love, he’s fair with them.  I’m fair with him, too.  The price I paid was more than most collectors would pay for this one, but not nearly as much as a ruthless extortionist would have pulled from my wallet with a gratuitous, evil “bwa-ha-ha-ha.”

Eric’s the sort of guy who keeps this fun, so I have no qualms about calling this the “Eric Magnuson Memorial Family Portrait”: 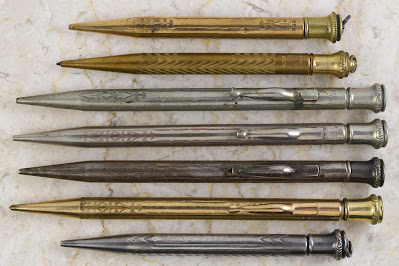 For as few Rex metal pencils as are out there, it’s interesting how many different variations there are on the imprints the company used.  All but one of the ringtops I’ve found simply sport the word “Rex” in distinctive, arched lettering: 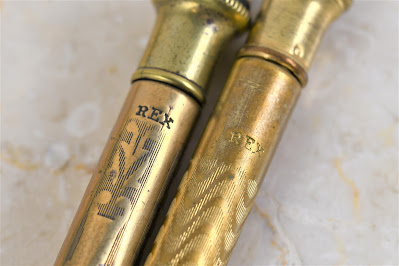 Since the company obviously knew the importance of registering trademarks (Exhibit A: “Ye Wm. Penn”), I would have expected a trademark to have been filed for this mark.  Perhaps one was: before Rex delved headlong into developing writing instruments, the company was a general metal specialties firm, so the mark may have been registered under some other category that would be nearly impossible to find in pre-1946 trademark indices (see the introduction to American Writing Instrument Trademarks 1870-1953).  Perhaps also it was used only locally, relying on state protection of the mark like many of the marks found in Trade-Marks of the Jewelry and Kindred Trades (see the appendix in American Writing Instrument Trademarks).

In retrospect, it seems silly that I questioned whether full-length pencils with clips, marked “Rexhold” in that same arched lettering, were attributable to Rex (Volume 2, page 166). 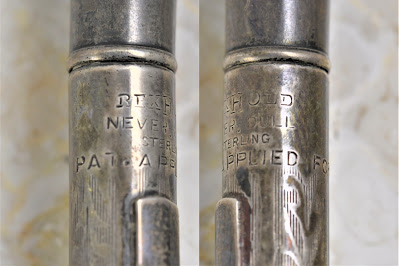 I theorized when this one turned up that the “hold” part of the Rexhold name referred to the clip, but I was hesitant to state that as fact at the time – I love it when time proves me right, and I still rankle a bit when something I stated as fact proves to be wrong.  Time has proven me right on this one (Volume 3, page 276); the pencil I received from Eric is identical, with simply “Rex” in arched lettering, together with “Pat. Applied for”: 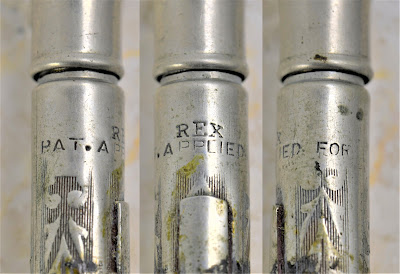 Note that the Rexhold-marked example includes another phrase: “Never Dull.”  The Never Dull name was later used heavily by Eclipse, which makes for a nice connection.  One of my other examples drops the “hold” but also has the Never Dull name: 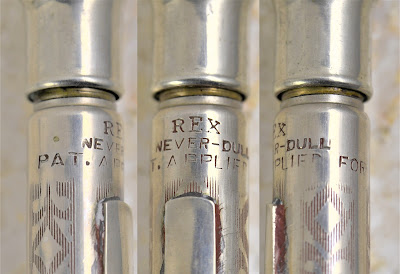 Last but not least are my favorites in this grouping - more formal, elegant examples bearing the name of the biggest little company you never heard of: 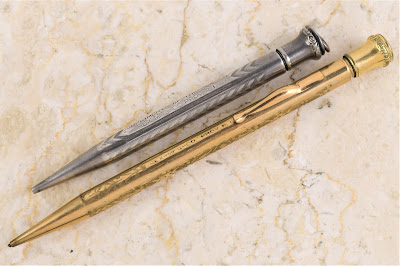 One is marked Rex Mfg. Co - Providence, RI, and the other adds another layer of charm: 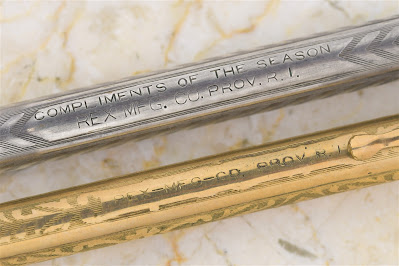 “Compliments of the Season.”
Posted by Jon Veley at 3:45 AM