A Century of Autopoint isn’t just about Autopoint; it’s about the people who were involved with the Autopoint story and Charles Keeran in particular.  I discussed Keeran’s early life in a previous article here (see “There But For the Grace of God”), which was covered in the first chapter of A Century of Autopoint.  After Keeran got the boot from Autopoint the second time in 1924, he didn’t depart completely from the story.  As that previously mentioned article covered, he landed at Dur-O-Lite for a time and maintained a decades-long epic of a feud with his former colleagues at Wahl.

In Chapter 7 of the book, “Exit Stage Left,” I’ve strung together all of the clues which provide insight into Keeran’s activities after 1924.  One of his landing places, albeit very briefly, was at another Chicago pencil company, the Rite-Rite Manufacturing Company.  On page 82, you’ll find this picture of some early Rite-Rite pencils: 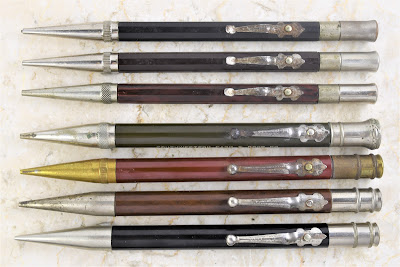 Something that has puzzled me, since long before I sat down to write the Autopoint book, was the “Patd.” imprint on these clips: 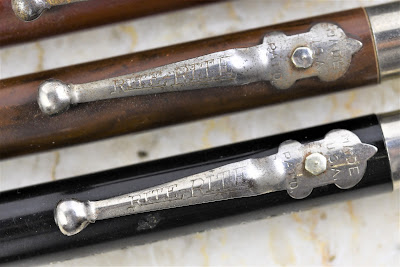 I’ve never seen a patent for that clip, exactly . . . although the one I found that is the closest is one that was issued to Charles Keeran for a similar clip, and found on early Realite pencils and then continued on Autopoints after the two companies merged.  Here are early Realite pencils from 1922-1924 sporting the clip: 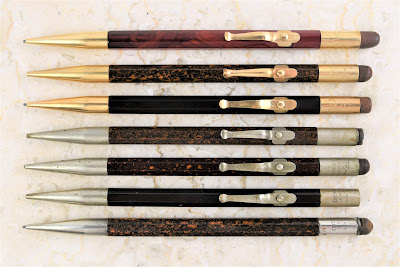 Keeran didn’t apply for a patent for this clip until May 24, 1924 – right around the time he got the boot from Autopoint the second time, which was probably the inspiration for his application.  It wasn’t issued until April 26, 1927 as number 1,625,809: 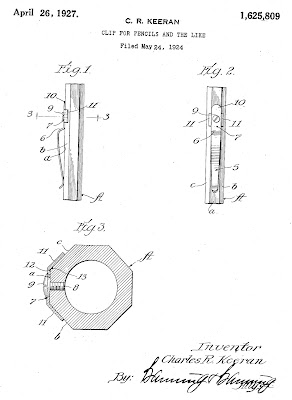 Note that Keeran’s patented clip, like the ones found on these Rite Rites, is contoured around the barrel, so only one bolt is needed to secure it and keep it from spinning.  Is it possible that Keeran got mad at Autopoint, packed up all his toys including the single-bolt clip and took everything over to Rite-Rite, hence the “Patd.”?

I don’t think so.  And what I do think shines a flashlight into the inky blackness of the United States Patent Office.

First, Keeran’s patent was assigned to Autopoint, probably as part of his severance from the company.  If Keeran walked into Rite-Rite’s door, he wasn’t bringing with him the rights to use that clip.  Maybe there was a license agreement, but there’s a better explanation.

As I was pawing through that 1931 Van Valkenburg catalog the other day looking for Listo clips, I found another page relevant to today’s story: 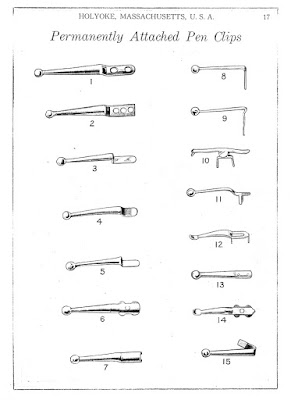 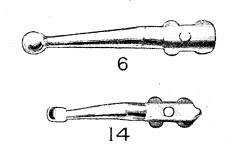 There’s no way Van Valkenburg would have secured a utility patent for these clips by 1931, since Keeran’s nearly identical clip had just been patented in 1927.  No, I believe there was a design patent issued to Valkenburg to protect the distinctive look of these clips – and that’s somewhere in the black hole.

My methodology in researching and writing American Writing Instrument Patents, both volumes, was fairly straightforward.  I started by going through every patent in category 401, the category in which most writing instrument patents reside, and I compiled a database of the pen and pencil ones.  Next, I went through other random categories scattered across the USPTO in which known pen or pencil patents would have been filed.  That’s how all the design patents wound up in the book – I had a few known design patents, figured out in what categories they were filed and then researched all of them.

The system wasn’t perfect, but then again – neither is the Patent Office.  Human beings were picking what categories to put things into, and as long as there are humans there are human errors.  With artificial intelligence, doubly so.

After I’d exhausted every line of inquiry, I organized the books in spreadsheet form, sorted in different ways – by date, by description, by inventor, by assignee and finally, by location.  If you have a patent date or number, the first section will do just fine.  But say you want to look at all the “clip design” patents?  That’s where a tool like my books really shines.

As long as the data is good.  There’s a hole somewhere.

Here’s the page in the book on which I was confident I would find a design patent issued for a clip sometime in the 1920s (next to Colonel Mustard in the library, of course): 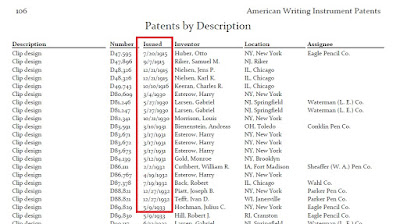 I went back and retraced my steps, painstakingly checking over my research.  All the categories I checked were to my knowledge the right ones, and yes, I did correctly report all the relevant patents filed in those categories.

My guess is that someone found an insane place in which to file design patents for clips sometime in 1916, and that person consistently did so until 1930.  And I haven’t found that place.  Eventually a clip will turn up with a patent number on it from the 1920s, and with any luck, that will be the key that unlocks that one particular file drawer in that improbably immense filing cabinet we call the patent office.

And when that happens, I’ll have plenty more to report to you.
Posted by Jon Veley at 3:45 AM