For several years, Joe and I have sparred over who has more varieties of Chilton pencils, and while I think Joe has pulled out in front of me, there was a time when I gave him a run for his money (the article I posted here on March 16, 2013 was titled “Neck and Neck” - see The Leadhead’s Pencil Blog Volume 2, page 97).

That doesn’t mean I haven’t found some Chiltons that are worthy of note to show you, though: 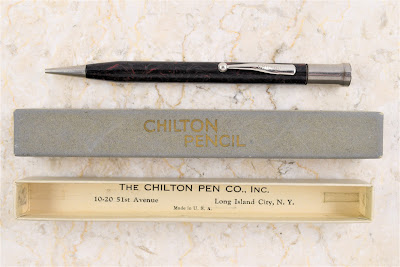 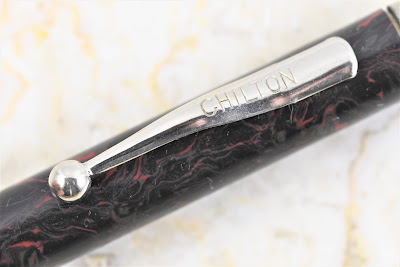 Not to mention the silver rather than gold filled trim - I’m not going to call it “reverse trim,” since I haven’t seen any other examples in that color plastic to know what it was or wasn’t “supposed to” have.  But as for that top - that flared shape is nicknamed a “Boston” top by Chilton collectors, and should denote somewhat earlier production, before the company moved to Long Island City, New York.

Just a few weeks ago on April 27 (https://leadheadpencils.blogspot.com/2020/04/the-chilton-article-i-meant-to-write.html), I explained that there wasn’t a bright line to separate flared “Boston” caps and bulbous “Long Island” caps on the day of the company’s big move.  According to advertisements, Chilton moved to New York between June and October, 1929, and the first advertisement which shows the new colors being offered by the company (and which appears to show that flared cap on a pen) was from September, 1930.

Not that the company didn’t use up some leftover parts even later, though: 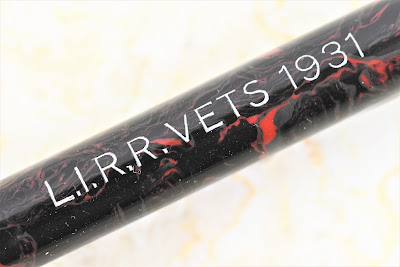 “L.I.R.R. VETS 1931.” While there’s any number of ways to read the first part of the inscription (I get a commemorative event for former employees of the Long Island Railroad), the last bit makes it clear that Boston caps were used on Chilton products – at least some of them – as late as 1931.

And on different note, a couple online auctions brought a pair of black Seth Crocker Repeating Pencils to my doorstep to go with the burgundy example I wrote about back in 2014 (see “The Patent Book Passes a Harsh Test” in The Leadhead’s Pencil Blog Vol. 3 at page 84). 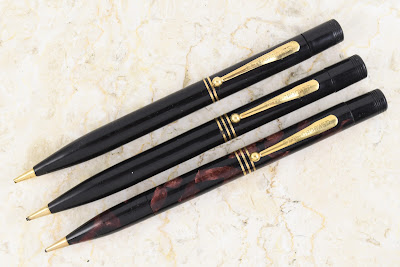 The first one to come up for bids was the one with the two bands - no sooner had it closed then the seller listed the one with three bands, and the OCD completest in me had to give chase, knowing the underbidder from the first go-round was likely to be even more determined.  I paid more than I wanted to, but I was glad I did when it arrived and I learned that the extra band might have denoted a larger size . . .

That's Joe Nemecek's picture of his two examples.  Joe also has both sizes, but both have three bands.  However, there’s a slight difference here: Joe’s smaller one is marked “Sears” on the clip rather than “Seth Crocker.”  The name is likely a hat tip to Seth Chilton Crocker’s father, Seth Sears Crocker, rather than a riff on the mail order giant – although Sears, Roebuck & Co. as a seller of pens and pencils likely had a hand in swiftly putting a stop to Seth Chilton Crocker’s use of dad’s middle name on a line of writing instruments.

As the story goes, the Seth Crocker Pen Company was set up by Seth Chilton Crocker after he got the boot from his fellow shareholders in Chilton, in 1932.  While I didn’t find any advertisements or announcements of the company’s formation, the patent for the Seth Crocker Repeating Pencil was applied for in 1932, and the company was dissolved by the State of Massachusetts effective March 29, 1938, suggesting it had become inactive well before that date.

The Seth Crocker Pen Company and the Crocker Pen Company are the bookends on either side of the Chilton story, at the later and earlier ends of the company’s history.  I planned to start this article with something from that other, earlier bookend, but as the story developed, there was more to it than I typically put in these “Lazy Sunday” posts.   That full story tomorrow . . .
Posted by Jon Veley at 3:45 AM