There are times when I feel like I both know a lot about something and I don’t know anything at all, so I can be thought of both as brilliant as an idiot at the same time.  Such is the case with this one: 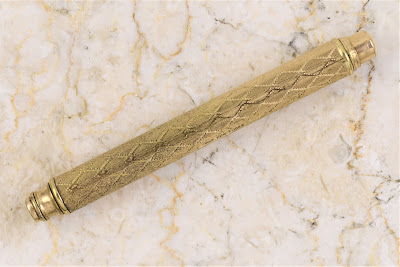 My friend Mir Vicem posted pictures of this one online a while back, and I was eager to get my hands on it.  Mir occasionally offers me pencils, and I’ve felt bad that my aversion to buying gold (and limited resources with which to do so) has more often than not squelched a deal.  What this one lacked in precious metal it more than made up for in other respects, and I was able to spare what it took to bring this one back for closer inspection: 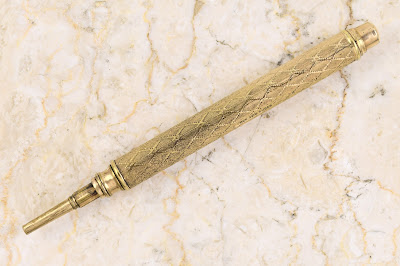 This is an unusual “dropper” pencil (at least, that’s what Joe Nemecek and I call them).  Face the barrel point down and push the button on top, and the mechanism drops down and locks into place.  There weren’t a lot of these out there, and after more than a century plenty of gunk has had the chance to work its way into these most of the time.  This one, whether by design or whether it has been kept in a better-than-average environment for most of its life, works extremely well. 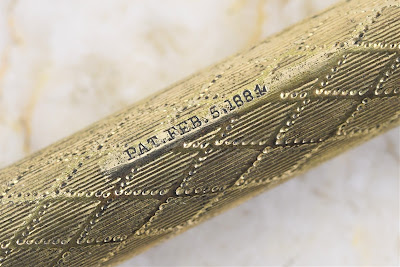 For me, a good portion of the value to this lies in that nice, crisp imprint on the barrel.  As an aside, one of the ways I cut down on the black shadows you get when photographing metal is to have a white piece of paper between me and the object I’m shooting to reflect more light.  Most of the time, the shots look better when I do that, but this time for whatever reason I like both.  I’ve spent too much time trying to decide which one to use, so here’s the other one: 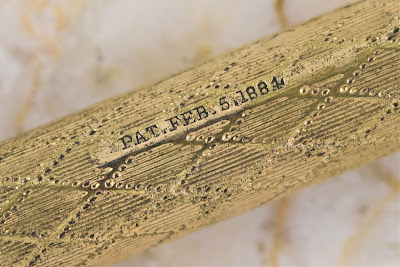 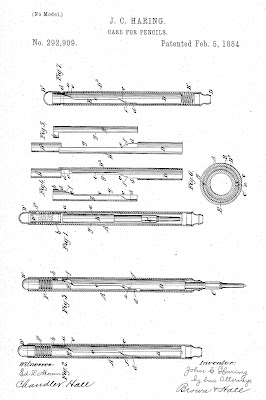 Without Haring’s name on the pencil, the question of who made, produced or marketed Haring’s patented pencil remains unanswered.  I list six patents to Haring’s credit in American Writing Instrument Patents.  His earliest, issued as number 214,820 on April 29, 1879, was for a gun-shaped pencil: 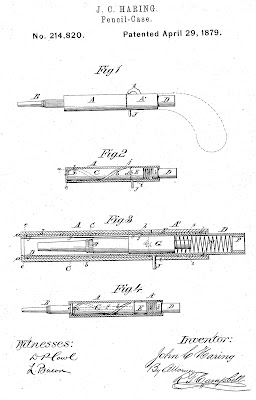 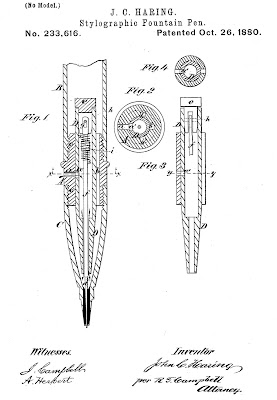 After a break, 1884 proved to be Haring’s most prolific year.  After the patent for today’s pencil was issued, he also received two other patents that year.  On May 6, he received patent 298,084 for another stylographic pen, along with his co-inventor, Charles H. Court: 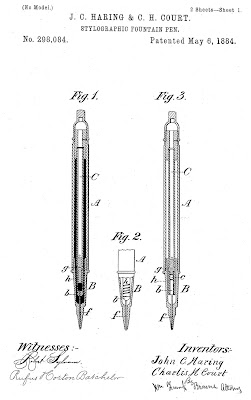 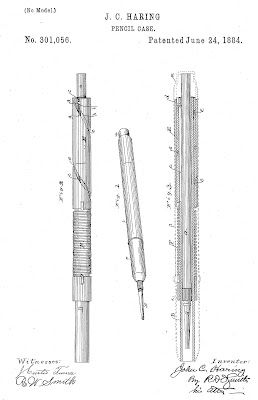 Court wasn’t his coinventor on this one, but he is listed as a witness at the end of the patent, along with a William J. Rouget: 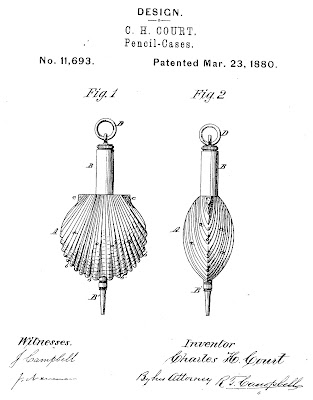 We come infuriatingly close to learning who Charles H. Court was in a reported court case, Cross v. Livermore, over whether the use of iridium on pen nibs by Livermore violated Alonzo T. Cross’ patents. 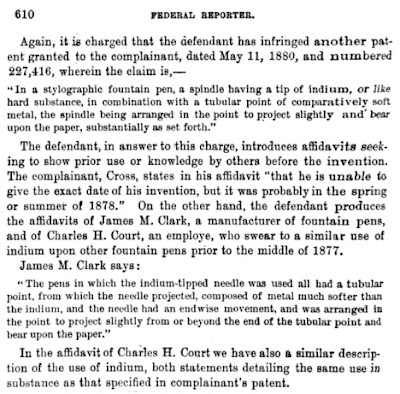 One area in which American Writing Instrument Patents excels is a section of the book I added as an afterthought, sorting patents by location.  Jersey City should ring a bell as the home of Ephraim S. Johnson, and a shell pencil like this marked E.S. Johnson would go a long way towards proving this was Haring’s association.  But another prolific inventor in town at the time was Charles H. Downe, who like Haring took out patents on both stylographic pens and pencils.  Also like Haring, Downes didn’t assign his patents to others.

But he did license them, to the Mackinnon Pen Company, and in another court case (French v. Foley, 11 Fed. 801, S.D. New York 1882) we know that Mackinnon stylographic pens were made by “Clarke.” 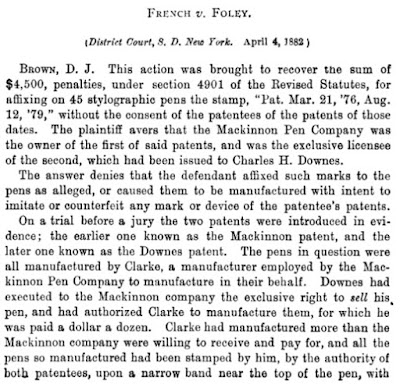 Was “Clarke” the same as our James M. Clark (without an “e”)?  I think so, because that detail would fit very nicely into this tangled web. 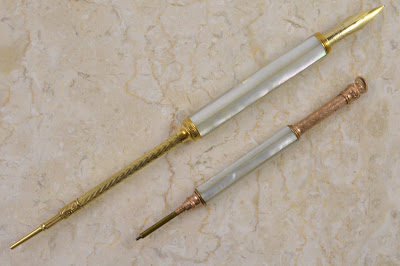 So, as the title of this article suggests, I both know a lot and know nothing about James Haring and his 1884 patent dropper pencil.  Other than it might have been made through a partnership with Court, or perhaps by James Clark, with a little help from Ephraim S. Johnson.

And then there’s one last detail to add to the mix.  Twenty five years after Haring’s dropper pencil patent was issued, he resurfaced to take out one last patent, for an unusual “polypoint” multicolor pencil: 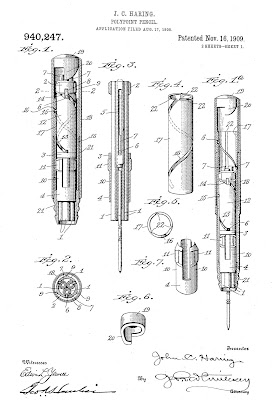 David Nishimura has an example - a three-color magic pencil - and he posted an article about it over at his blog back in 2015 (see https://vintagepensblog.blogspot.com/2015/10/polypoint-three-color-magic-pencil.html).  The following are David’s pictures, used with his blessing:

Haring’s patent for this unusual configuration didn’t involve any of the Jersey boys though – this last Haring patent was assigned to Edward Todd.  Certainly an association 25 years later says nothing about Haring’s activities during the 1880s.