I’ve only seen one other of these - it was shown to me at The Ohio Show last year, and now I know that I didn’t look at it closely enough: 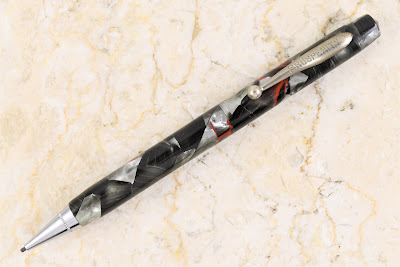 “Prosperity” is the name on the clip, and story of the Prosperity was told by Daniel Kirchheimer and published in the Writing Equipment Society Journal in 2007 (the article is still available at Daniel’s website, at https://danielkirchheimercom.files.wordpress.com/2015/12/prosperity.pdf).
As stated in his article, there was Prosperity, the Sheaffer subbrand, and Prosperity Pen Company of New York City, the notorious pyramid scheme – like Amway but with fountain pens.

While the Sheaffer Prosperity-marked pens had “Made by Sheaffer” proudly imprinted on their barrels (and some had Univer clips, as well), the barrel on mine lacks any imprint.  However, this one does fall within the Sheaffer subset: 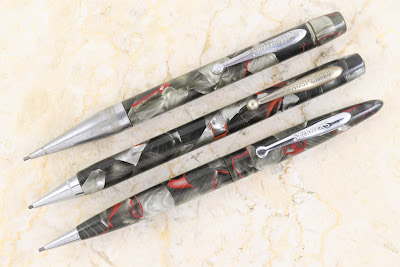 The grey marbled plastic with red veins is a celluloid frequently encountered on Sheaffers from the 1930s, although with a little less black in them than you see in the Prosperity.  Note also that the clips are the same, but the Prosperity has a ball clip typical of earlier Balance-era products (we’ll get back to that in a minute).  I’ve posed it between these two examples because the Sheaffer Jr. at top has a nose drive mechanism, while the regular Balance line used a rear-drive mechanism.

We’ll get back to that in a minute, too.

Daniel documented the New York City Prosperity Pen’s meteoric rise in 1932 and inexplicable disappearance, and newspaper references I found confirm this.  In Tampa, one commentator wryly noted in December, 1932 that pens called “Prosperity” likely “can be filled only with black ink”:

The Prosperity Pen scam was devised by the Prosperity Sales Plan Corporation, which was headquartered at 347 Fifth Avenue, New York.  “Salesmen” were lured in with a classic gimmick: that their profits were “limited” to $50,000.00.  Within a matter of weeks, “this ‘prosperity’ fountain pen racket” was the subject of several inquiries to the Better Business Bureau, and correspondence from the company was being turned over to postal inspectors for investigation, as reported in The Minneapolis Star on January 13, 1933: 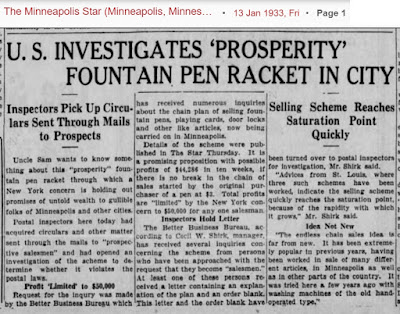 The promise of fast, easy, and (above all) plentiful cash spread like wildfire in early 1933, leading to one sharply worded column in The Ithaca Journal on January 21: 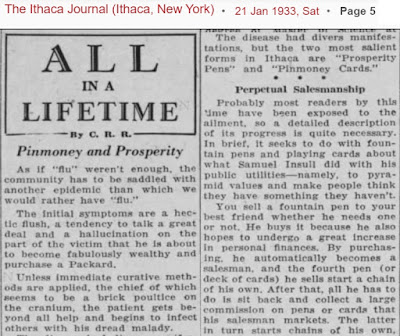 “As if the ‘flu’ wasn’t enough, the community has to be saddled with another epidemic than which we would rather have the ‘flu.’

“The initial symptoms are a hectic flush, a tendency to talk a great deal and a hallucination on the part of the victim that he is about to become fabulously wealthy and purchase a Packard.”

Prosperity Pen spawned several copycat systems and received both national advertising and national attention, which begs the question: if so many people were duped into this get-rich-quick system, why are the pens all these people were supposedly selling so hard to come by?  The answer, I believe, was that the Prosperity Sales Plan Corporation’s profit model was to get in, oversaturate, and get out quickly before the authorities had time to act.

Just a couple months later, on March 16, 1933, Prosperity was shifting gears, encouraging all its salesmen “and all those who want to make more money” to embark on its latest venture: the Prosperity “Pillo-robe,” a “cushion, pillow, motor-robe, duffle-bag, beach bag and blanket, all in one”: 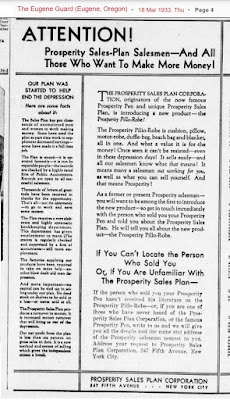 There may have been a sucker born every minute, but at this point Prosperity was looking for two.  “Prosperity Pen” was already becoming a cautionary tale, the equivalent of Brooklyn Bridges for sale in the American press.  Nobody wanted anything to do with owning one by the end of the year.

The spectacular rise and fall of the Prosperity Pen Company of New York begs the question: if Sheaffer was marketing pens under the Prosperity name at the time, even as a lowly subbrand, why would such a litigious company tolerate the sullying of a name with which it was associated?  The answer, I believe, is that Sheaffer wasn’t using the name at the time, and when Sheaffer did, it wasn’t using it here.

All of the advertisements I found for the Prosperity Pen were in Canada, and the vast majority of them – even though they were in reseller’s advertisements, not official Sheaffer announcements – indicate they were proudly made by Sheaffer.  The earliest I found was in The Edmonton Journal in far-flung Alberta, on December 17, 1938, five years after the New York Prosperity folks had abandoned pens for “Pillo-robes”: 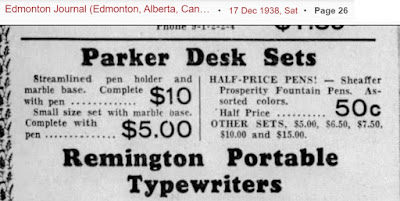 Perhaps the prominent connection between Prosperity and Sheaffer (at least on the pens) was to clarify and distinguish these from the earlier Prosperity Pen – just in case folks in the Great White North had heard rumblings of a huckster by the same name south of the border.  Since I’ve never seen a Prosperity pencil matching the earlier brand, that might explain why Sheaffer felt no need to similarly imprint the pencils. 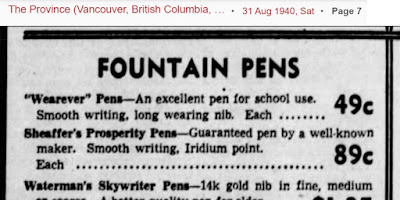 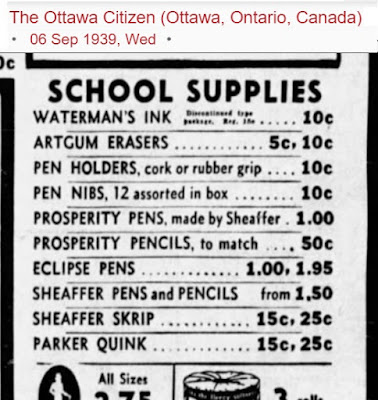 Most advertisements like this dried up by the third quarter of 1940.  The last advertisement I could find for “Sheaffers Prosperity Pens” and pencils was published on March 19, 1941, in the Chilliwack Progress (British Columbia).  The good folks of Chilliwack might still have had a few leftovers: 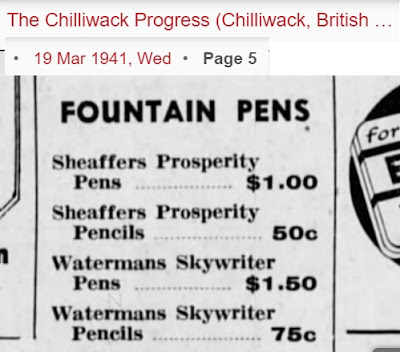 All the evidence points towards the Sheaffer Prosperity being a Canadian subbrand, offered widely between 1938 and 1940 – and maybe just into 1941.  And remember that ball clip on my Prosperity? 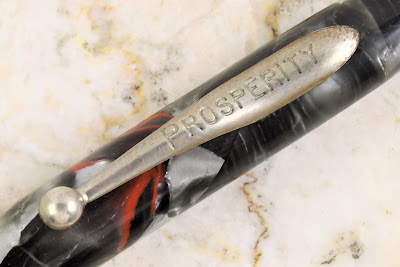 By 1938, Sheaffer had discontinued the ball clip on its regular line of products, first flattening the ball and then adopting the “rigid radius” clip.  The ball clip was still used on subbrands through the mid-1930s, but the flattened clip seen on WASP pens and pencils was in full swing by the time the Prosperity advertisements appear.

Everywhere, that is . . . except Canada, which continued using ball clips long after their American cousins had left them by the wayside.

And while this last fact isn’t as compelling as what’s already been presented, it’s worth mentioning: when this one showed up online, I imported it from a seller in Canada.

I ran all this by Daniel, who agrees that all the evidence points north for the Sheaffer Prosperity but says there isn’t any definitive evidence to indicate that production of these was exclusively Canadian.  So for now, there’s the best answers I have to my two questions: made between 1938 and 1940 (or maybe ‘41), and yes, probably Canadian.

But now I have a third question.  And it’s the most interesting part.

There were a couple characteristics I pointed out about my new addition early in this article.  First, I said that it was a nose drive pencil.  The back half is just wedged in there to hold the cap on: 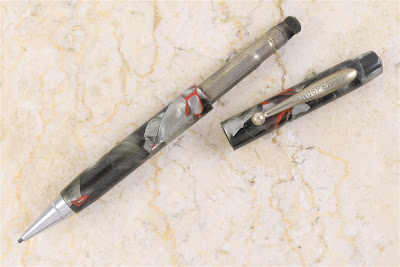 But did you notice what kind of nose drive it is?  Those dimples around the nose cone look very much like what you’d see on a Parker. 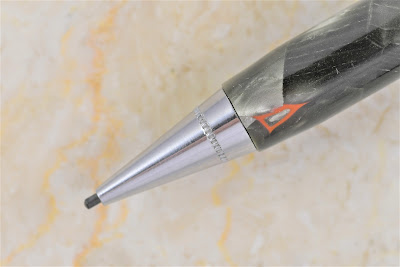 Here it is, next to a Parkette Deluxe: 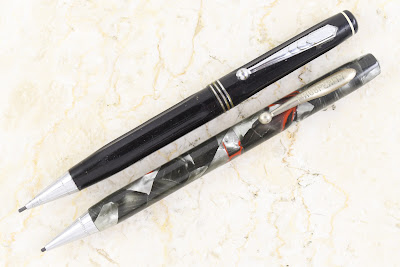 I’ve seen that sort of thing before.  Here’s the Prosperity, alongside a Sheaffer from the 1940s with those same dimples: 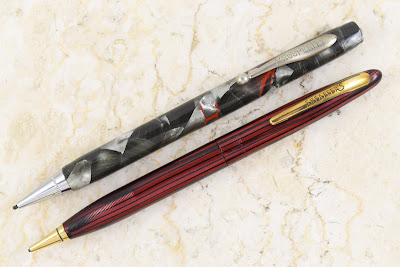 I wrote about that carmine Sheaffer earlier here (see The Leadhead’s Pencil Blog Vol. 3, page 145).  “Could it be that Cross also supplied a few mechanisms to Sheaffer?” I asked.  “Maybe,” was my inconclusive and perhaps overlawyerly answer.  I’d noted some subtle differences in what are really identical innards to a Cross-built Parker mechanism.

The years during which this Prosperity was made (1938-1940ish) fit squarely within the “screw it” epoch of Parker pencils, during which Parker sourced twist drive mechanisms from Cross and wrapped them up in any plastic that happened to match the pens they were to accompany.  Is this a Cross mechanism inside my Prosperity?  I believe it is.

But I’m not done yet by a longshot and now, I’m thinking there may be even more to it than that.  Here’s the Prosperity next to a Sheaffer I’ve never written about, because I haven’t quite been able to figure it out: 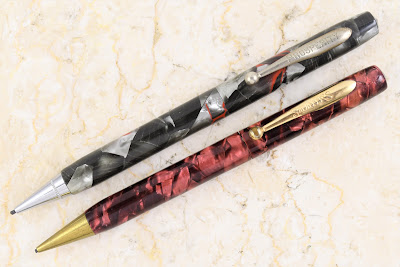 It doesn’t have dimples around the nose, but it is a nose-drive pencil, just like the Prosperity.  And that color . . . it’s not like anything I’ve ever seen on a Sheaffer, but it’s exactly like what I’ve seen on something else: 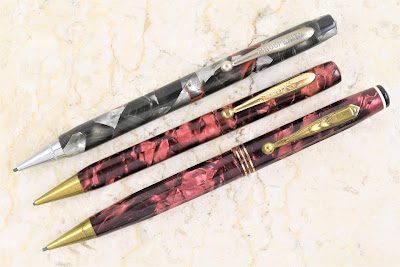 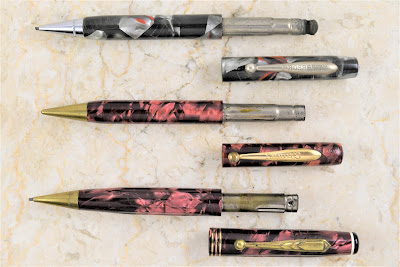 Now we’ll come to the last bit.  At the beginning of this article, I’d noted the similarities of the Prosperity to Sheaffer’s grey pearl with red veins.  But I’d noted that the Prosperity had a little more black in it than the typical Sheaffer celluloid.  Oh, but it has just about the right amount of black in it for something else: 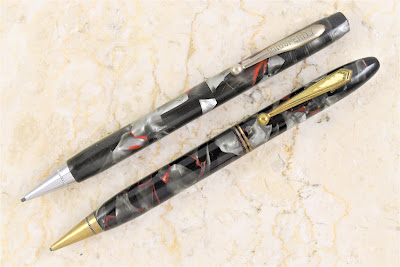 Like a Parker Parkette.  And then there’s this odd little guy, which I’ve had lounging alongside my other Parkettes just because I wasn’t sure where else to put it: 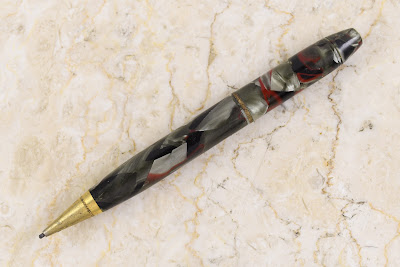 But next to that Sheaffer Jr. pencil back at the beginning of this article: 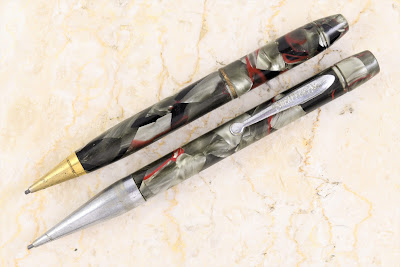 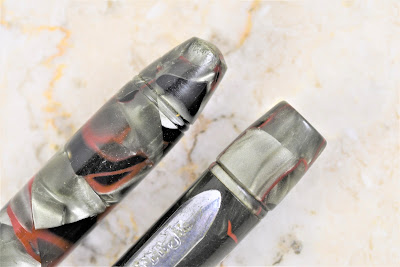 Email ThisBlogThis!Share to TwitterShare to FacebookShare to Pinterest
Labels: Private