I’ve only got one example of these to show you - I haven’t really chased them, because outside of the name on the clip, there really isn’t anything special about it: 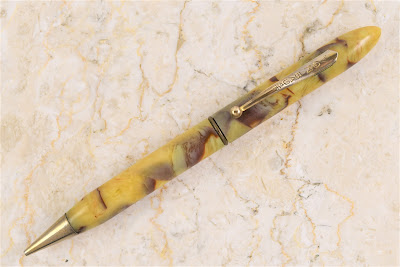 The name on the clip is “Von Baust”: 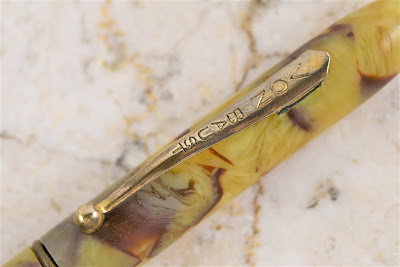 They come in fountain pens as well as pencils, with the pens being the same low quality product with a cheap steel nib.  Von Bausts show up in pen forum and group discussions every so often, usually with the original poster asking if anybody knows anything about it, followed by a rousing chorus of chirping crickets.

The Von Baust scam – and all the evidence points towards it being nothing more than that – started in mid-1932, when dry cleaners across the country began running promotional advertisements offering free pen and pencil sets in cooperation with the “Von Baust Ink Company,” promoting the introduction of “the new acid-proof, waterproof, fadeless ink”: 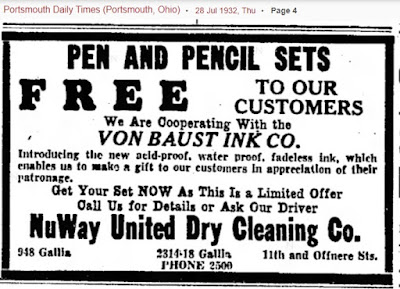 Now let’s think about that: dry cleaners offering a promotion for a bulletproof ink . . . and when the advertisements showed what these pen and pencil sets looked like, they were really vague.  In November 1932, the Valley Morning Star ran this ad by American Cleaners, including some stock art appearing to show something like this: 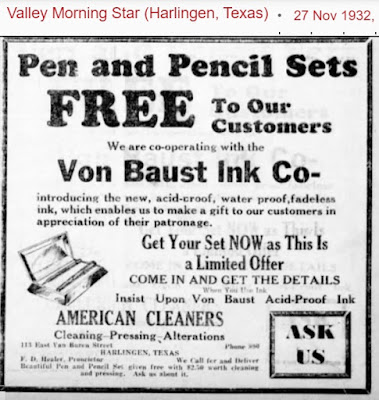 A month later, on December 6, 1932, the Pampa Daily News in Texas published the clearest artwork showing these free pens and pencils, but they looked nothing like the examples I’ve seen: 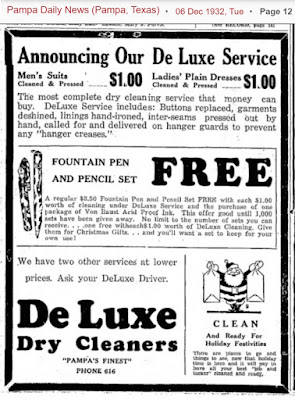 There’s a reason for the ambiguity: the promised pens and pencils likely never existed, or were only made as samples to con dry cleaners across the country into paying for pens and pencils knowing they would never be delivered.  Indiana authorities caught onto the scheme quickly, after a man named “R.E. Reynolds” fleeced a local dry cleaner for $15.  “The merchandise, which was to have been delivered later, never arrived.” 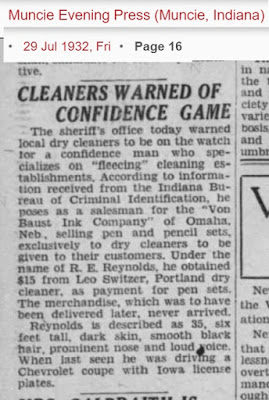 After ten different merchants in Connecticut complained to the Better Business Bureau, Hartford Police had a sit down with the Von Baust salesmen, and on March 26, 1933, The Hartford Courant reported that police “persuaded them that they were not welcome in Hartford and advised them to leave the state.” 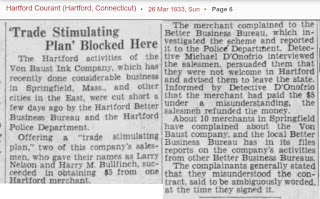 Apparently the hucksters were unwelcome elsewhere, too.  In late 1933, the same advertisements appear, but this time, local businesses in far-flung New Mexico were offering pen and pencil sets in conjunction with the “Trainers Ink Company.” 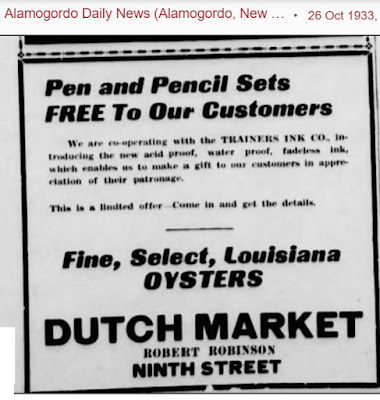 And then these guys really stepped over the line.  On September 29, 1933, the Clovis New Mexico News-Journal ran an advertisement claiming that “WITH EACH DOLLAR PURCHASE WE GIVE ABSOLUTELY FREE A COMPLETE LIFE TIME PEN AND PENCIL SET TOGETHER WITH A PACKAGE (MAKING A PINT) OF TRAINER’S FADELESS INK”: 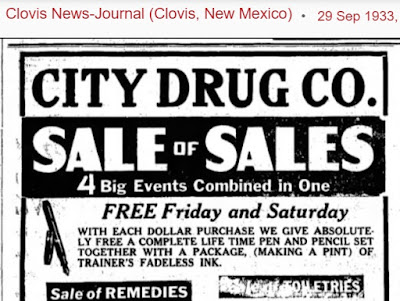 These “Life Time” sets, if they existed at all, were not Sheaffer’s trademarked “Lifetime” sets, but I wouldn’t put it past them to use correction fluid to add white dots to whatever they were giving away.  I haven’t seen a pencil marked “Trainer’s,” but I do have one marked “Lifetime.” 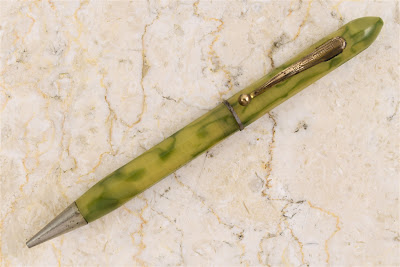 If you were expecting Sheaffer quality, and if you actually got one of these, you would be disappointed; the only way you would have gotten your money’s worth is if it truly were free. 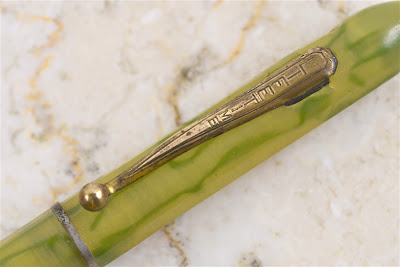 The Federal Trade Commission intervened.  On April 2, 1934, a cease and desist order was entered with United Advertisers, Inc., which “conducted its business under various names and styles of Von Baust Ink Co., Trainer Ink Co., and Kamerette Sales Co.”  Von Baust – it was revealed – never existed.

As for “Kamerettes,” advertisements during the same period offer free (or nearly free) cameras, using the same sorts of gimmicks.  One advertisement from May 7, 1933 shows one of them actually offered for sale, at 15 cents: 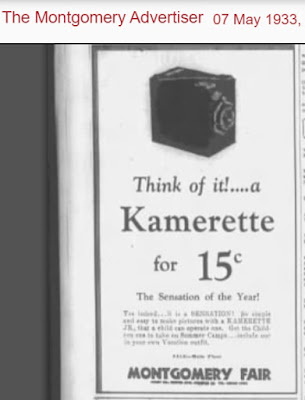 The laundry list of prohibitions gives a clear picture of the game United Advertisers was playing.  The FTC consent order made the company promise:

1.  That it wouldn’t claim to be selling products of Von Baust Ink Company or any company other than itself.

2.  That it wouldn’t represent that merchandise secured by dealers’ customers was free when it wasn’t.

3.  That it wouldn’t make “false, fictitious or misleading statements” concerning the value of its products or the price at which it would normally be sold.

4.  That it wouldn’t claim it isn’t making a profit when it is.

5.  That it wouldn’t issue coupons which mislead customers into believing they have any value towards the purchase of merchandise.

6.  That it wouldn’t represent “that the pen-and-pencil sets which it distributes are ‘lifetime’ sets, and/or that the same are sold under a ‘lifetime’ guaranty, when such is not the fact.

7.  That it wouldn’t collect money from customers for “the cost of its ink, or the cost of packing, mailing and insurance of the same” when the ink was supposed to be “free.” 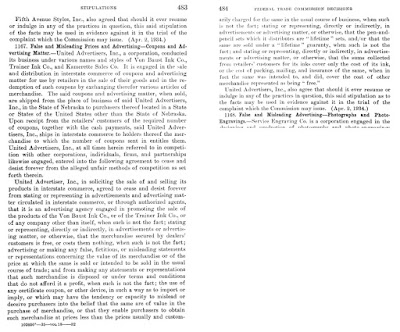 The fraudsters may not have been quite done.  Two years later, in Scranton, Pennsylvania, the authorities were warning local residents about a fraudulent magazine-selling scheme by salesmen claiming to represent the “United Advertising Service.” 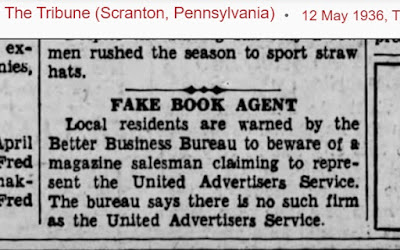 Whether this was the same company, or a different band of hucksters who just made up a name, I don’t know.  Certainly if it was our United Advertisers, they wouldn’t have had the high ground had they chosen to prosecute anyone for sullying their good name!

The evidence isn’t clear whether United Advertisers just hired bad salesmen who went rogue, or whether the Von Baust ink scheme was a fraud from the top down; however, since the FTC order was directed squarely at United Advertisers, the company’s leadership bore at least some culpability for what was happening in the field.  Since the order indicates that the Von Baust syndicate hailed from Nebraska, I looked in that direction to see what I could find out about the personalities behind United Advertisers.

Incorporation of the company was announced in the Lincoln Journal Star on May 2, 1932.  The incorporators were William H. Hebenstreit, Beatrice Lucille Miller and G.F. Dashiell:

Hebenstreit and Dashiell also set up another corporation, “American Advertisers, Inc.” in August, 1932, along with a man named Alvin J. Zeigler.  Given what happened later that year, skeptics wouldn’t be out of line to think these were shell corporations set up with the intent to shield themselves from liability for what they knew they were about to do.

I don’t know what to make of Hebenstreit.  In January, 1932, while he was a radio salesman, he was involved as a “victim” in a suspicious robbery in Omaha. He claimed that while he and another salesman were in town for a radio sales convention, he visited local radio manager H.L. Noll at his store when two bandits tied the three men up with their own shoelaces and then relieved them of their cash.

I say it is suspicious because Hebenstreit and the other salesman each claimed to have exactly $40 on them which was taken.  Given Hebenstreit’s business practices in the next year, I wonder if the local dealer they were visiting had insurance to cover the losses he and his visitors sustained by such banditry: 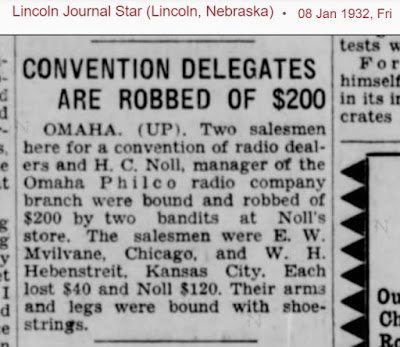 Nevertheless, after the FTC shut down the Von Baust scheme, Hebenstreit appears to have rehabilitated his reputation, moving east to Sebring, Ohio to start a new life with Beatrice Miller.  According to an account published in The Salem (Ohio) News on March 29, 1950, Hebenstreit and Miller arrived in Sebring in 1933, and on July 1, 1934 the two of them, along with J. B. Briggs, “started the rusty and worn machinery in the old E.H. Sebring Pottery plant" with the sole purpose of of producing just enough dinnerware to satisfy the accounts of a sales company controlled by Miss Miller and Mr. Hebenstreit. 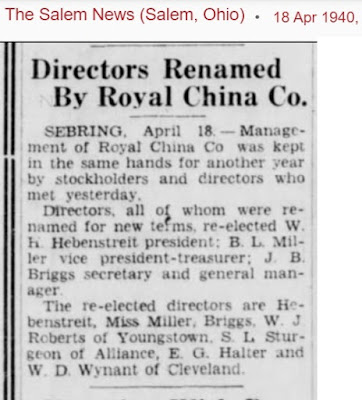 The company was named Royal China Company, and Hebenstreit became its first president, succeeded by Miller after his retirement in 1946: 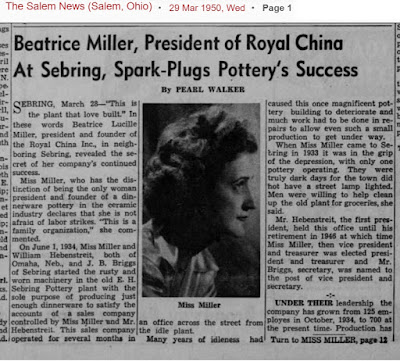 Whatever misfortunes Hebenstreit and Miller suffered or inflicted during their wild days in Nebraska, they appear to have learned the hard lessons of their ways.  Hebenstreit served as an officer in the United States Potters’ Association.  By 1942, he was serving as the association’s president when he formally protested price ceilings imposed by the Office of Price Administration (OPA): 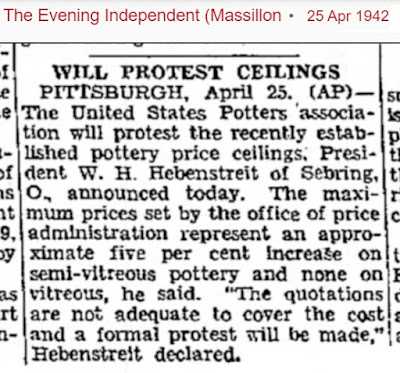 He also served as Sebring’s president of town council and was active in his local Rotary club.  After assuming control of Royal China as president in 1946, Beatrice Miller turned the company from a means to make things right for customers in her prior life into a multi-million dollar concern.  In 1957, Royal China set up a subsidiary, Royalton, to handle the growing demand for plastic dinnerware.  Miller had established ceramic engineering scholarships at her alma mater, DePaul, and she was also helping men and women attend college at Mount Union:

By 1970, Miller was described as the “former owner and director of the Royal China Company” when she was elected to another service organization board (East Liverpool, Ohio Evening Review, April 20, 1970).  Her legacy, as a successful businesswoman and philanthropist, was secure.
In all probability, neither she nor William Hebenstreit ever wanted to hear the words “Von Baust” again.