The Art (Curse) of Noticing

In the wake of writing the Autopoint book, I’ve been a changed man.  “The art of noticing,” I call it.  Once you learn what is normal, the things that aren’t stick out like they have neon signs on them.  It quickly morphs into a curse . . . once you learn to read the signs, you can’t unread them.

When this group showed up online, it’s something that I would have sailed right on by before I wrote the book – at the time, I wouldn’t have noticed: 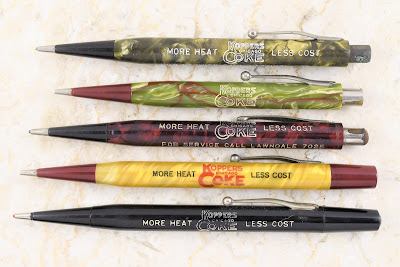 Here’s what I knew was normal: the proprietors of Koppers Chicago Coke were very good customers of the Autopoint Company during the 1930s.  It’s kind of neat to find a wide variety all marked with the same company’s name, but I’ve probably got at least as many lounging around the museum.
All of these show a short tip, which tells me these are likely Realite pencils, made by Autopoint during the 1930s when the Realite name was revived as an Autopoint subbrand after an absence of a few years, when the Realite Pencil Company and Autopoint Pencil Company merged.  A group of these is pictured on page 128 of A Century of Autopoint. 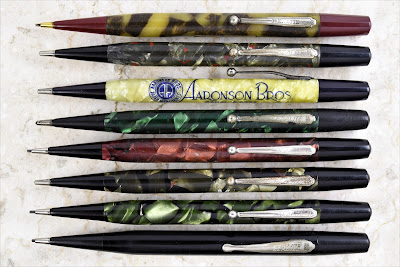 No thanks to writing the book, I knew there were a couple unusual things to see in the bunch being offered for bids online.  First, that swirled pearl barrel with screen printed rather than imprinted lettering is something you’ll see a lot on Dur-O-Lites and other advertising pencil brands – but it’s the first one I’ve noticed in this plastic on a Realite, and only the second I’ve seen with printed rather than imprinted lettering.

And then there’s that sort of sickly green with red and white swirls in it.  That’s a color that is found on a lot of different brands, both higher tier like Chilton as well as a lot of third tier stuff, but again . . . not on a Realite. 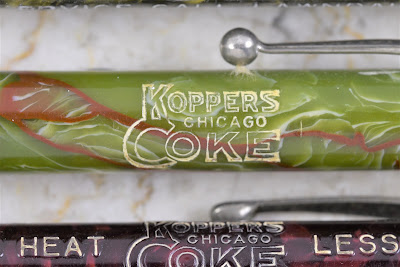 And of course, my natural curiosity had me wondering which incarnation of the Realite clips these would sport, since the auction images showed only the imprints on the side.  There were four variations, also as shown on page 128 in A Century of Autopoint.  Here’s Figure 8-92 from the book: 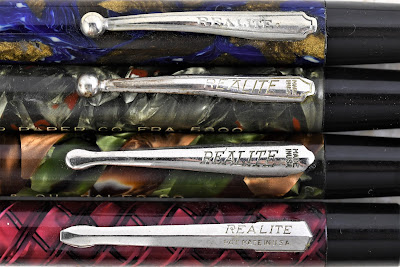 The bottom variation I could rule out from what I could see, and when these arrived, four out of these five examples fit neatly within the categories shown in the book.  Three of these sport the italic script ball clips, and the fourth sports the “teardrop” clip reminiscent of a Sheaffer flat ball clip: 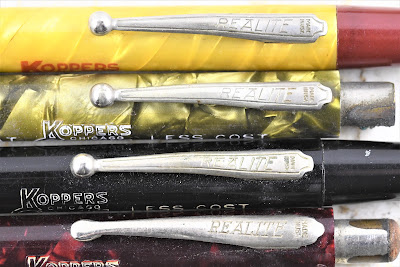 But then there was that fifth one. . . 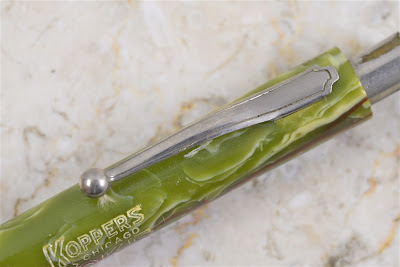 Nothing at all.  This variation isn’t shown on page 128 in A Century of Autopoint because it appears elsewhere in the book, on page 123.  Here’s Figure 8-77: 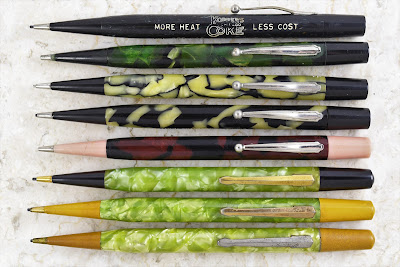 Since the clip is unmarked, I knew what I would probably find on the back side of the barrel: 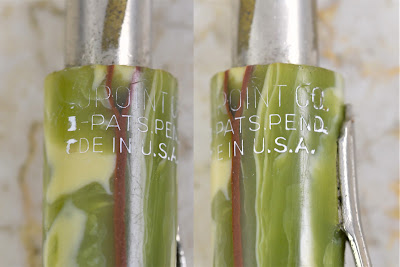 Like the other examples pictured on page 123 of the book, this one sports an Autopoint imprint rather than the Realite name.

And that means something else.  Note that Realite-marked pencils along these lines all have longer, more tapered caps.  Autopoint-marked examples with ball clips have stubbier, more squared off caps.  Of course caps could be swapped, either when assembled at the factory or at any point over the last 90 years or so, but when enough examples turn up in one configuration “in the wild,” I don’t think it’s a wild assumption to say that the emerging pattern is what was intended: shorter caps on Autopoints, longer ones on Realites.

That means my new swirled Realite probably has the Autopoint’s cap on it.   When I swapped it over, it fit much more tightly than usual on the Autopoint, but now that it’s on there I’m sure that’s right. 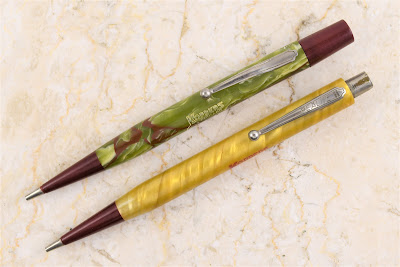 So now I’m noticing that I need another long, maroon cap, since this one is sharing custody of one with another that I really want to keep together.  And I’m also noticing something else, now that I‘ve added a sinus infection to the other Autopoints I have along these lines: 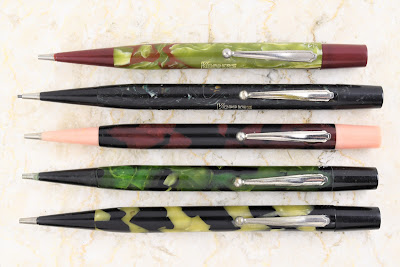 Now whenever I see one of these, I’m going to be wondering whether it’s the long, normal variety or the short one . . .

Great Article- I’m always looking out for a ‘Realite-Autopoint’ to add to my collection!
Since starting to Collect Sheaffer Fineline Pencils (lots of clip variations) I’ve really enjoyed the ‘Pearl Plastics’.
Using the ‘84-16’ Special Dark Lead is a bonus as well!