This one came in a lot of stuff that was only moderately interesting.  I just wanted to see what the heck it was: 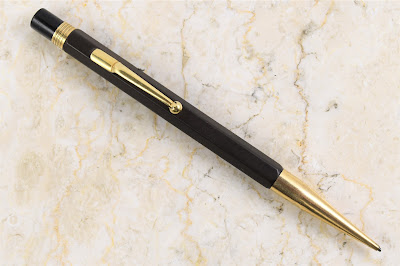 That graceful front end, classy faceted barrel... everything had me thinking this might be any early Rex pencil, and since the auction description was nothing more than “here’s a bunch of pencils,” I couldn’t wait to see what the markings on it would say.

They didn’t say anything.  Not one single mark anywhere on it to go on.

When it arrived, I compared it to the Rex pencils I was thinking of, which were patented February 19, 1924: 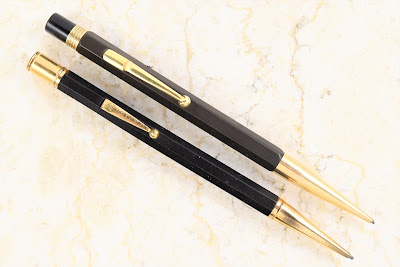 The faceted barrel is the only thing these two have in common.  The tip’s different, the clips are totally different, and the cap on the new addition screws off, while early Rex pencils have a metal cap that pulls off.  And it isn’t a later Rex, either – they were rear drive pencils, while this is a nose drive affair.

Still, it’s a high quality, substantial pencil, so I decided to bring it along to the Baltimore Show so I can could ask around.  As I was showing it to Joe Nemecek and Richard Keith, holding it over my showcases full of sales stuff, I noticed something in one of the cases . . . and answered my own question. 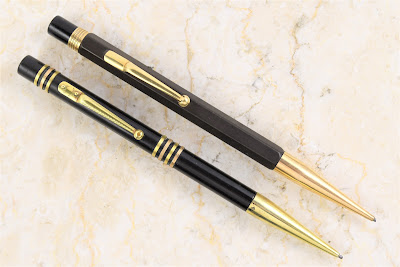 A Mabie Todd Fyne Poynt has the right clip (sometimes the rivets are present, sometimes not), and about the right nose . . . but that cap isn’t right. But that isn’t the only Fyne Poynt I have for comparisons: 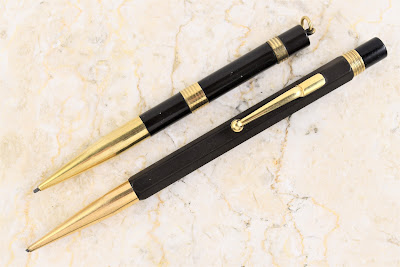 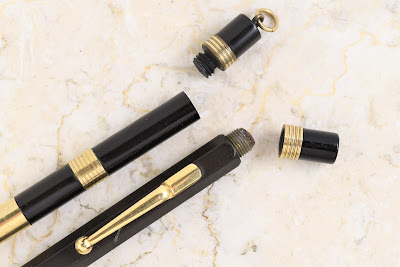 Threaded differently.  And all my Mabie Todd pencils have round barrels, not faceted ones like this.
So I pulled out the mechanisms to see what was going on, and at least in my mind, it clinches it: 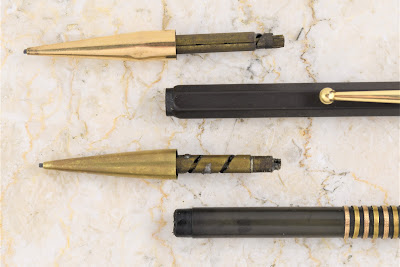 Sure, they look different – because the metal sleeve surrounding that mechanism is stuck inside the barrel of that little ringtop.  These two mechanisms are identical.

All in all, I’m going with Mabie Todd on this one.
Posted by Jon Veley at 3:45 AM