(Note: this is the third installment of a series of articles concerning who made identical pencils marked Century and EVRDA.  If you landed here by an internet search, the link to the first installment is at https://leadheadpencils.blogspot.com/2020/06/in-footsteps-of-giants.html).

Over the past two days, I’ve been sorting out who made identical pencils marked Century and EVRDA: 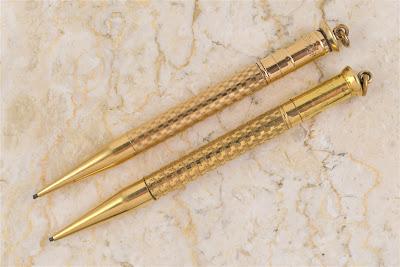 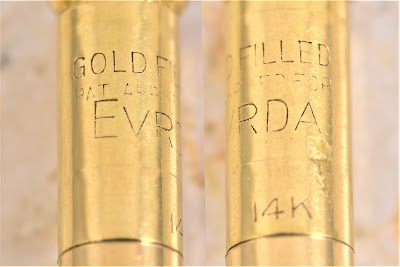 Century I’ve ruled out, in both its incarnations.  The first Century Pen was marketed only in 1882, and the second Century Pen Company, by all accounts, only assembled pens but didn’t manufacture any of the parts.

EVRDA, so the story goes, was a tradename used by the last incarnation of A.A. Waterman & Co., which had marketed “Everyday” pens.  A.A. Waterman & Co., we are told, adopted the trade name “Chicago Safety Pen Company” to get out from under the baggage of having to use that ungainly “Not Connected with the L.E. Waterman Company” disclaimer that was ordered by the Courts in 1914.

Here’s the examples of the EVRDA pencil I’ve been able to turn up: 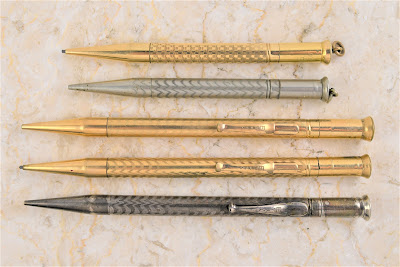 Since we know A.A. Waterman did make its own pens, I theorized that maybe A.A. Waterman’s redheaded stepchild, the Chicago Safety Pen Company, might have manufactured these EVRDA pencils.

Wrong.  Well, kinda wrong.  I found the answer, which wasn’t the answer I was expecting to find and which is not consistent with the A.A. Waterman story we have been told.

The obvious starting place is to look for the trademark “EVRDA,” to see who filed it for registration.  The mark was published in the Official Gazette on March 1, 1921: 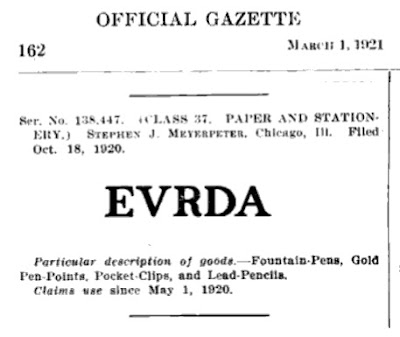 No, this one isn’t in American Writing Instrument Trademarks 1870-1953, and no, it isn’t because I missed it.  Trademark registration in 1921 (as is the case today) is a two-step process: if a mark passes preliminary review by an examiner, it is “published for opposition” in the Official Gazette – that puts the world on notice that if anyone wants to object to the mark being registered, now’s the time to do it.

The EVRDA mark did not pass that second step.  We’ve seen that happen before, most famously when the Sandfelder Corporation objected to Salz’ registration of “Salrite” because they claimed that it sounded too much like “Shur-Rite,” generating a court case memorializing that dustup for the benefit of all us armchair historians today (see https://leadheadpencils.blogspot.com/2016/01/flash-in-pan.html).

Since the mark made it into the Gazette, what prevented the registration of EVRDA was an objection by someone else.  Given who tried to register it, that is a fascinating realization.

The Gazette indicates only that the application was filed by Stephen J. Meyerpeter, a name which seems like an obvious choice given the story as it has been handed down to us.  Not much is known about Meyerpeter, but George Kovalenko wrote a significant article at his blog (the link is http://fountainpenhistory.blogspot.com/2014/08/waterman-v-waterman.html) in which he found a reference that Meyerpeter, like Arthur A. Waterman himself, was a valued member in the L.E. Waterman organization early on - Meyerpeter assisted A.A. Waterman at the 1896 Exposition in New Orleans (the reference was in the February 6, 1896 issue of The American Stationer, at page 244).

Says George: “And who was Steven J. Meyerpeter?  He also eventually left the Waterman’s company and helped to run a series of other pen companies, including Resevo, and Modern Pen Co., the later incarnations of A. A. Waterman Pen Co. after A. A. was forced out of the company, so the story goes.”

We know that Meyerpeter was manager of the “L.A. Waterman & Co.” (sic) as late as December, 1919 when this interview was published.  Apparently the author was also confused about who Meyerpeter represented, mixing up his L.E. and A.A., but the address on North Dearborn makes it clear he was representing A.A. Waterman & Co.: 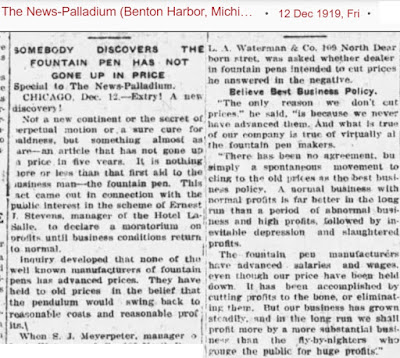 Could Meyerpeter have been attempting to register the EVRDA mark on behalf of another “later incarnation” of A.A. Waterman?  Maybe, but the fact that he couldn’t get a trademark through, on a mark riffed on a well-known A.A. Waterman mark says it all.  He couldn’t register it because someone else was using it – maybe Meyerpeter was no longer involved with A.A. Waterman by 1921.

Or maybe he was still with A.A. Waterman, and whoever was using the EVRDA name was not.

The only primary source we have for who made or produced the EVRDA pencils and matching “Chicago Safety” pens is a catalog preserved at the Pen Collectors of America’s online library: 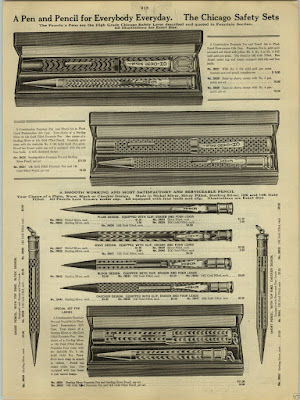 These are clearly our pencils, and the “Chicago Safety” pens they were meant to accompany are identical to contemporary pens marked A.A. Waterman.  The assumption that Chicago Safety was the next (and last) incarnation of A.A. Waterman & Co. has therefore been a reasonable one.

That assumption, however, is wrong.

There were a couple problems with the story that didn’t make sense to me.  The first was that this catalog is the only evidence I have been able to find that something called the “Chicago Safety Pen Company” ever existed: 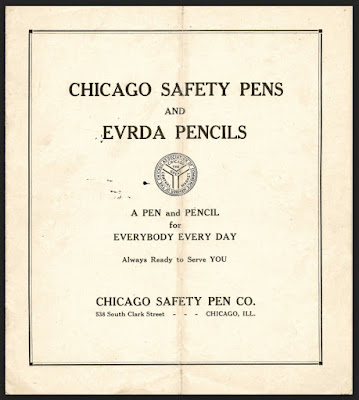 But the more serious problem was that the Modern Pen Company, also known as A.A. Waterman & Co., was operating at the same time as this Chicago Safety Pen Company - just a few weeks ago I showed off an A.A. Waterman pencil made in the early 1920s, and Meyerpeter’s trademark application was filed by March 1, 1921, when notice was published in the Official Gazette.  In fact, here’s a “Special Introductory Offer” for Arthur A. Waterman fountain pens, published on May 23, 1922: 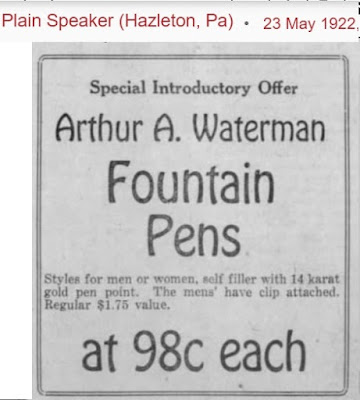 The key to this mystery was the address on the cover of that Chicago Safety Pen Company catalog: 538 South Clark Street, Chicago.  My search was turning up really weird, inconsistent results for occupants at that address until I realized that wasn’t just an address . . . it was a space station . . .

When I ran across a reference that one entire business at that address was in “room 807,” I realized just how big 538 South Clark is.  Chicagoans at the time knew it simply as the Rand McNally Building (that’s Rand McNally, the map publisher), at the corner of Clark, Harrison and LaSalle Streets.  It’s the Federal Building today: 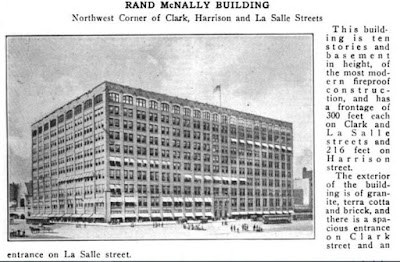 I found a roster of all the occupants in that building during 1922 – exactly when that Chicago Safety catalog was printed.

There was only one pen manufacturer in that entire building.

And you know who he is. 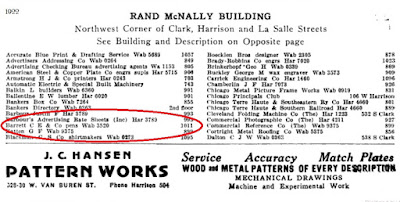 Clarence E. Barrett, disgraced as a patent infringer during the Sheaffer v. Kraker smackdown, later to rise again as the “boogeyman” behind National Pen Products: 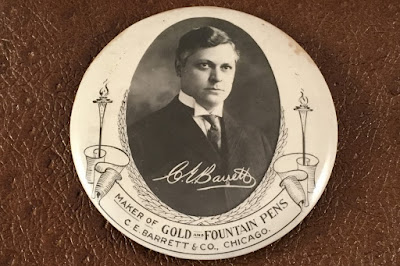 This badge is in the collection of Loyal Knight Brian Holstine, who contributed this picture after his daughter resolved “technical issues” she described as the “200-pound object placed directly between his keyboard and his chair.”

Oh, but Barrett has always been the easy way out – “the boogeyman,” I like to call him, since this blog has spent more time debunking the notion that Barrett was responsible for everything big, colorful and flattopish than it has devoted to giving the poor man credit for keeping his head up despite enormous adversity in the face of Walter Sheaffer.  This time, however, it looks like Barrett was our man, turning out pens that looked like A.A. Waterman pens and blocking A.A. Waterman’s frontman, Meyerpeter, from being able to register a trademark for the name EVRDA.

However, there’s more.  Barrett may have been the only pen man in the Rand McNally Building at the time, but many of my articles posted here over the years have illustrated that while he made or assembled pens, he usually sourced pencils and pencil parts from other suppliers.  I still craved that clincher of knowing where EVRDA pencils came from.

It’s been years since I’ve looked at the EVRDA and tried to figure out who might have made it.  All of them have a “Pat. Applied For” imprint, which might be helpful if there weren’t a zillion or so patents pending in the early 1920s.

There were two helpful silver linings in the patent search department, though.  First was that even though the Century and EVRDA pencils can’t be taken apart readily, that same catalog at the PCA library has a page including a skeletal view of what’s inside: 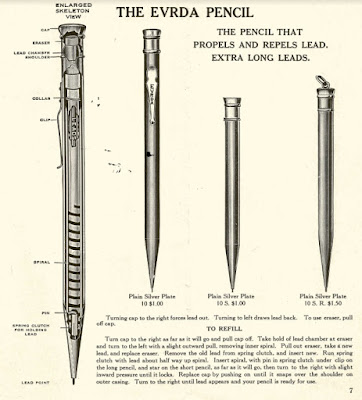 The second is that the process of elimination has reduced a zillion or so down to just a kajillion or so.  Or maybe a handful.  Years of writing blog articles about different examples of patents proved useful as I've written about pencil patents listed in American Writing Instrument Patents 1911-1945, and so many more of these patents are familiar since the last time I looked at this.  Instead of throwing up my hands and saying to myself “god, this is hopeless,” this time I was saying “oh, that’s not it . . . oh, that’s not it. . . " until I got to one I didn’t remember looking at before. 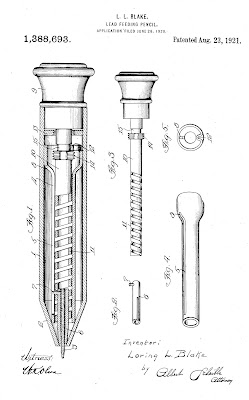 And now for the punch line.  I followed up on this “Blake Pencil Company,” and I found an announcement of the corporation’s incorporation: 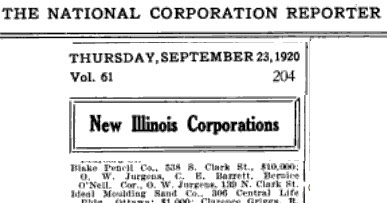 By Clarence E. Barrett, his sister-in-law Bernice O’Neill, and their lawyer, O.W. Jurgens, as announced in The National Corporation Reporter on September 23, 1920 - at the same address used by "Chicago Safety Pen Company."  Five years ago, I revealed that Clarence and his sister in law, along with a Montgomery Ward executive, incorporated National Pen Products in 1922 to supply writing instruments to Montgomery Ward stores (https://leadheadpencils.blogspot.com/2015/07/what-about-boogeyman.html).

“Even if Clarence E. Barrett was a master salesman and a nice guy with whom you might want to do business,” I suggested, “after what happened to those who bought parts from him in the Kraker fiasco, who in their right mind would want to risk buying anything from him just four years later, in 1922?”

Does this mean that C.E. Barrett & Co. was making A.A. Waterman’s pens by the early 1920s?  As controversial as that conclusion may be, I believe it is correct.  My friend Allan Goforth added some more evidence to pile onto that conclusion on Facebook, when he posted a picture of a tray of pens which included this one:

I’d written here about the matching pencil, marked “Miller’s Guaranteed Pencil,” and compared it to a very similar John Holland pencil, back in 2018 (see https://leadheadpencils.blogspot.com/2018/10/millers-guaranteed-pencils.html): 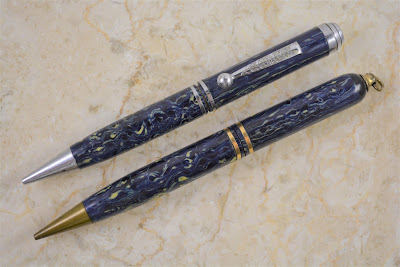 “That floral clip is reminiscent of writing instruments assembled by C.E. Barrett,” I had observed.  So was Allan’s pen a Miller’s, a John Holland, or something else?
Something else indeed:

It’s marked “Resevo.”  And, as provided in American Writing Instrument Trademarks 1870-1953, we know who that was: 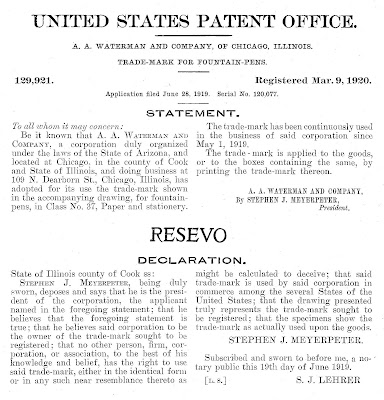 The name was registered by Stephen J. Meyerpeter, as president of A.A. Waterman and Company, who claimed the company had used the name since May 1, 1919.

Yes, Virginia . . . C.E. Barrett & Co. made pens and supplied pencils for A.A. Waterman & Co. after the company moved to Chicago.  EVRDA pencils, however, were sourced by Barrett through another Barrett subsidiary, the Blake Pencil Company, to accompany Chicago Safety pens Barrett marketed on his own account through another of his companies, the Chicago Safety Pen Company.
And Blake Pencil Company also supplied identical pencils to the Century Pen Company.
Posted by Jon Veley at 3:45 AM