"Why do you want to go there?"

When I heard that in response to my comment that I was going to the Michigan Pen Show, I knew that I was going to start my report off with a heartfelt apology, on behalf of my people, for the way many of my fellow Ohioans behave around this time of the year when it comes to our northern neighbors.

See, I’m used to people asking me why I’d want to make a road trip to spend a weekend playing with pens and pencils. But that’s not what this guy was getting at. He wanted to know why I would choose to go to Michigan, home state of the Michigan Wolverines, since I am both an Ohioan and an Ohio State alumnus – after all, what right-thinking Buckeye would do such a thing?

Yeah. And I’m the one that needs to get a life, right?

So before I get started with my show report proper, I’ve got a neat story about the Ohio-Michigan rivalry that’s largely forgotten: how it started.  It had nothing to do with a gridiron battle, but it did involve a battle of another sort. Ever hear of the Toledo War?

Part of the Northwest Ordinance provided that the north-south border of three of these states – what are now Ohio, Michigan and Indiana – would be an east-west line intersecting the southern tip of Lake Michigan. Ohio was the first state admitted out of the Northwest Territory, joining the Union in 1803, and included within its boundaries from the earliest days was the Port of Miami, an important commercial port on the western edge of Lake Erie which is today known as Toledo.

Now it’s time to get out your map and take a close look at it. Is Toledo south of the southern tip of Lake Michigan? No, it absolutely is not. By all rights, under the Northwest Ordinance, it should be Toledo, Michigan.

It’s easy to understand how the mistake happened. Not only was it extremely difficult at the time to draw a straight line a couple hundred miles long through dense woods, no one was really sure in 1803 exactly where the southern tip of Lake Michigan was.

Whether it was an honest mistake or not, it didn’t help matters that in 1816, when the United States Government sought to clarify Ohio’s northern boundary, the U.S. Surveyor General was Edward Tiffin, a former governor of Ohio (and the man for whom Tiffin, Ohio is named), and the resulting survey found – surprise, surprise – that Toledo is in Ohio.

By 1835, when Michigan applied for statehood, improved knowledge of geography made it perfectly clear that the bustling port of Toledo was in Michigan, and of course Michigan wanted it – Ohio’s "dibs" notwithstanding. Both Ohio and Michigan raised militias in preparation for a border war, and both Ohio and Michigan passed laws making it treasonous to pledge allegiance to the other. The conflict was only averted in 1836 when Congress made Michigan a deal: give up Toledo, and we’ll give you (1) statehood and (2) the Upper Peninsula.

So whenever Buckeyes and Wolverines prepare to settle their differences, whether it be on the football field, a basketball court, or in a misguided display of "school spirit" between fans of opposing teams in a bar, just remember that no matter what happens, it will never be Toledo, Michigan if Ohio loses, and if we play double or nothing and Ohio wins, it still won’t be Sault Ste Marie, Ohio.

And yes, I did willingly venture across the once-disputed "Toledo strip," bearing nothing but a truckload of pens and pencils and the usual desire to reconnect with old friends and make a few new ones!

The Michigan show is different from the other ones I’ve attended this year. It is truly a club show, organized and put on by volunteers on a not-for-profit (in fact, little-bit-of-a-loss) basis. The ringleader of the bunch (show organizer) is Lih-Tah Wong, shown here multitasking as gatekeeper, communications director and possible ebay surfer . . . 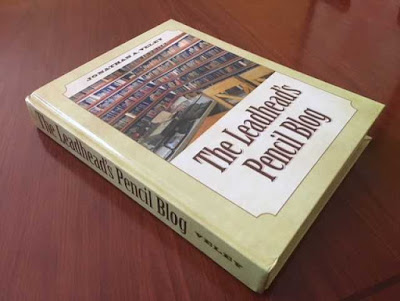 As a Michigander, alumnus of the University of Michigan, and show attendee, I forgive my Buckeye neighbor for the transgressions of his state - welcome to the show.

However, I don't forgive you for walking out of Michigan with the Laughlins - just because you found them before me is no excuse!